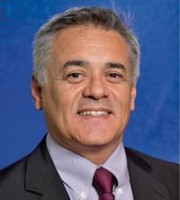 Paulo Parente Marques Mendes is a managing partner at Di Blasi, Parente & Associados, an attorney at law and IP agent with over 30 years of experience.

He graduated from the Candido Mendes School of Law in Brazil, holds an MBA in sports administration from the Brazilian School of Public Administration at the Getulio Vargas Foundation and achieved certification in conflict mediation from Mediare.

Mr Parente Marques Mendes has authored several books and articles on intellectual property and is frequently a guest speaker. In 2018 he represented ASIPI’s position on the Madrid Protocol at a congressional hearing in Brazil, as the country considers adherence to the treaty.

He wrote the chapters “The Legal 500: Merger Control (Brazil)” in In-House Lawyer Country Comparative Guide (2017); “The use of geographical indications as an instrument of protection and development of the Brazilian agriculture” in PI na Agricultura (2012); and the article “Brazil Moves Fast to Fight Ambush Marketing” in World Intellectual Property Review (2010). He co-authored Studies on Combating Piracy (2011), IP, Trademarks, Patents, Design Systems and Technology Transfer (2010) and How to Understand Entertainment and Sports Law in Brazil in 2010 and 2011.