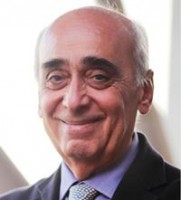 Mehmet Nazim Aydin Deriş graduated from the Geneva University Faculty of Law in June 1968. He is fluent in French, English, Italian and German and speaks Greek.

Since July 1971 Mr Deriş has been shareholder and manager of Deriş Patents and Trademarks Agency AS, providing a full range of services for IP and industrial property rights. Formerly a senior partner, he is currently counsel of Deriş Attorney-At-Law Partnership for court action and transactional matters, customs seizures for unfair competition, industrial and intellectual property. He has extensive experience in litigation and prosecution in Turkey and abroad.

Since the early 1980s Mr Deriş has been an active member of different commissions engaged in establishing the Decree-Laws on industrial property at the State Planning Organisation and the Ministry of Trade and Industry, preparing studies on diverse subjects to be submitted to the commissions involved.

Mr Deriş participated in the preparatory work of the office commission for the new Turkish Code of Industrial Property, which has been in force since January 2017.

Mr Deriş was involved with the development and implementation of proprietary office helpware.

As a long-time independent member of the International Association for the Protection of Intellectual Property (AIPPI), he was actively involved in establishing the AIPPI Turkish National Group in 2007, which developed into an association and now has approximately 180 members. He was the first president and served until November 2010.

Mr Deriş was actively involved in establishing the Turkish national group of FICPI.