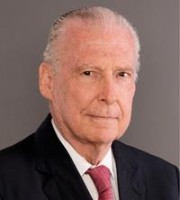 Luiz Leonardos is an attorney at law and an industrial property agent. He is a partner in the firm’s litigation department. His practice focuses on the administrative and judicial litigation of patents, trademarks and geographical indications.

Mr Leonardos’s career highlights include being:

Mr Leonardos holds a law degree from the State University of Rio de Janeiro (1958), a post-graduate degree in legal research from the Getúlio Vargas Foundation (1968) and an LLM from Gama Filho University (1984).