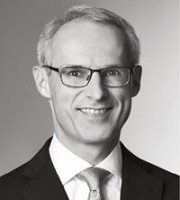 Gallus Joller is a partner and attorney at law at Troller Hitz Troller, a leading Swiss IP boutique established in 1941.

His practice covers advice and litigation in all IP fields, with an emphasis on trademarks, advertising, unfair competition, anti-piracy and IT-related IP issues. Regarding trademarks, Mr Joller manages global portfolios and counsels on filing and prosecution strategies, licensing and enforcement, including oppositions, cancellations and customs seizures. He has substantial experience in litigation and has been involved in several landmark cases before the Swiss Federal Supreme Court, notably on the protection and infringement of non-traditional trademarks and trade dress, as well as domain name disputes.

He has been ranked by various international publications, including Chambers Europe, WTR 1000, WTR Global Leaders, Who’s Who Legal, The Legal 500, Best Lawyers, WIPR Leaders and MIP’s IP Stars. Singled out as a “brilliant and highly recommendable” practitioner (Chambers Europe, 2016) and “authority on likelihood of confusion issues” (WTR 1000, 2017), Mr Joller is recognised as a “hardcore litigator and respected prosecutor” (Who’s Who Legal, 2013) who “has earned much respect for his prolific success” (WTR 1000, 2011).

He attended the Universities of St Gallen and Geneva and worked at the Max Planck Institute for Intellectual Property and Competition Law in Munich (1998-1999).

Mr Joller is the author of numerous publications on IP law and a frequent speaker on IP-related topics. His PhD thesis examined the likelihood of confusion in the law of distinctive signs. He has contributed chapters on relative grounds for refusal, well-known trademarks and coexistence agreements to a commentary on Swiss trademark law, the chapter on trademark licence agreements to a contract law handbook, the Swiss chapter to an international domain name law handbook and the Swiss chapter to an international analysis of trademark dilution.