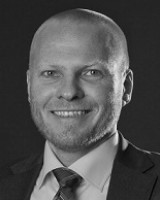 Frode André Moen joined Zacco in 2010 as an attorney at law. He works primarily with IP rights, including trademarks, copyright and design; litigation and dispute resolution/enforcement; unfair competition and marketing law; prosecution; clearance work; as well as IP rights strategy work in general.

Mr Moen received his law degree (Cand Jur) from the University of Oslo in 2000, after having also served as a research assistant at the University’s Institute of Public Law during 1998/99. He was admitted to the Norwegian Bar in 2003 and practised as an attorney at law in two law and IP consultancy firms. He also served as a deputy judge with the Toten District Court (now the Gjøvik District Court) between 2002 and 2005.

Mr Moen advises domestic and international large companies from a broad range of industrial sectors on trademark portfolio strategy and trademark prosecution, as well as assisting them with IP-rights related contentious matters in Norway.

Mr Moen is approved as an external lecturer at the University of Oslo, Faculty of Law. He is a member of the Norwegian Bar Association, the Norwegian Group of the International Association for the Protection of Intellectual Property, Fonip (the Association of Norwegian IP Advisers), INTA and the Pharmaceutical Trademarks Group.