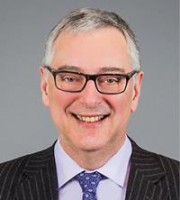 François Guay is a member of Smart & Biggar’s executive committee and has practised exclusively in IP litigation for 35 years. He has in-depth experience in advising clients on IP litigation strategies, conducting discoveries, examinations and cross-examinations, as well as preparing highly persuasive arguments to be presented in court.

Mr Guay is among the most experienced IP litigators in Canada and a highly sought-after adviser to the largest, most innovative companies in the world. He has appeared before the Quebec courts and the Federal Court of Canada and has argued many cases that have resulted in leading jurisprudence in the fields of patents, trademarks, industrial designs, copyright, unfair competition, trade secrets and computer-related technology. More than 200 of the cases he has been involved in have been reported in Canada. He also has a vast amount of experience with extraordinary recourses such as interim or interlocutory injunctions, seizures before judgment and anti-counterfeiting and anti-piracy matters.

Mr Guay has been recognised as a leading IP litigator in publications including:

Mr Guay was named Canada’s Trademark Litigator of the Year by Benchmark Canada in 2013 and 2014, and 2019’s Intellectual Property Lawyer of the Year for Montreal by Best Lawyers.