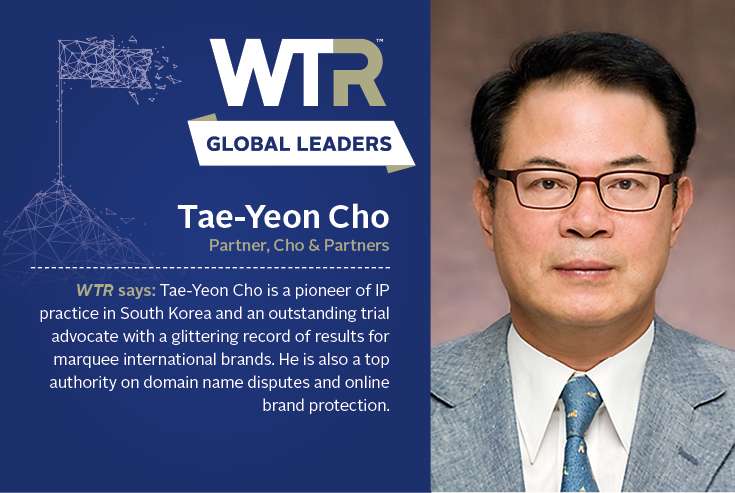 You have been practising IP law since the concept of intellectual property was in its relative infancy in South Korea. Why did you choose a career in this field and what has been the key to your success?

When I began my legal career in South Korea in the early 1980s, intellectual property was an entirely new field for lawyers; I chose it to take on the challenge. Key to my success has been having an accurate understanding of client needs and an in-depth and creative approach to new legislation in order to meet those needs.

As a distinguished trial lawyer, you have served as lead counsel for some of the most significant cases involving intellectual property in South Korea. Which of your previous trademark cases gives you the most satisfaction and why?

One of your specialist areas is domain name dispute resolution, where you serve as a mediator for such disputes. What trends are you witnessing in the field and what advice can you give to practitioners for more effective domain name enforcement?

In South Korea, there is a considerable body of case law – including case law from the Supreme Court – concerning domain name disputes, and there is currently no particular issue in the enforcement of rights with respect to domain names. If an issue arises, I recommend taking immediate steps to enforce your rights. The longer the domain name has been in use, the more likely it is that the registrant’s interests will be considered.

If you could make one change to the brand protection and trademark environment in South Korea, what would it be and why?

In terms of trademark infringement and unfair competition, rights holders can claim compensation for damages only when an infringer has used the mark at issue on the same kind of goods as those of the rights holder. The Supreme Court considers there to be no damages when the mark is not used on the same kind of goods; therefore, the rights holder cannot claim compensation for damages. I believe that even in such cases, the rights holder should be able to claim the equivalent of loss of royalty. In order for this to happen, there should be a change to Supreme Court precedents or amendments to the relevant legislation.

Finally, in what ways do you think the brand protection landscape will change globally in the next five years, and how should rights holders prepare?

Protection of trademarks online will become a more important issue and rights holders will need to keep this in mind as they formulate their brand protection strategies.

Tae-Yeon Cho is a founding member of Cho & Partners. He began his legal career focusing on IP law at a time when the concept of intellectual property was in its infancy in South Korea. As a result, Mr Cho is considered to be among the most knowledgeable and experienced IP lawyers in the country. He is also recognised as a distinguished trial lawyer, having served as lead counsel for numerous significant IP-related cases.

@WTRmagazine INTA announces that the 2020 Annual Meeting and Leadership Meeting will be held in Houston, Texas from November 16.… https://t.co/tvT1Oika6l Read more

@WTRmagazine RT @trevorclittle: The WTR Industry Awards shortlist has just been revealed. It is a reminder that, during these difficult times, companies… Read more

@WTRmagazine RT @trevorclittle: INTA has announced that its 2020 Annual Meeting, combined with its Leadership Meeting, will be held in Houston, Texas, f… Read more