"Trademark litigators must be skilled in procedural law and practice" 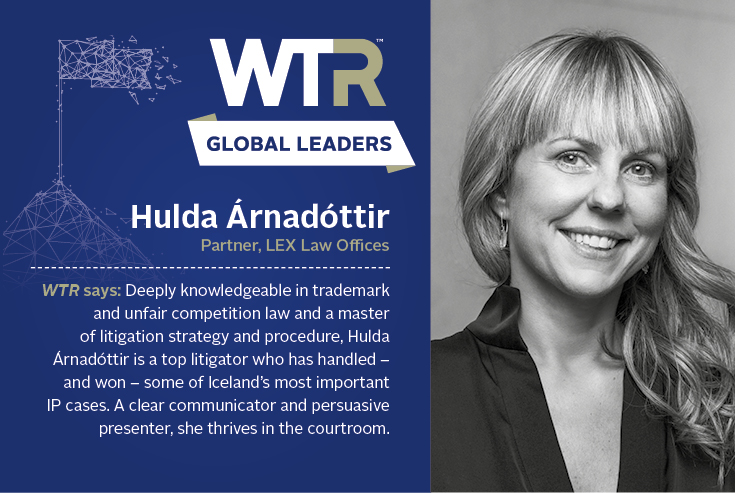 Can you tell us about your professional journey to date?

I joined LEX in 2006 after completing an LLM in commercial law at the University of Bristol. During my studies, I sought out all available courses in both IP and competition law and my final dissertation was on the intersection of these two fields. I was initially recruited by LEX to support the practice in these areas, as well as property law, of which I had previous experience. I rapidly proved myself as a valuable addition to the team and made partner in 2009. I now lead the ever-growing trademark practice at LEX and have had the privilege to litigate many of the high-profile trademark cases brought before the Icelandic courts in recent years. LEX’s latest achievement has been its acquisition of IP boutique GH Sigurgeirsson IP, which has significantly enhanced the firm’s international IP practice.

As well as IP law, you specialise in competition, property, media and European law, in addition to constitutional and human rights law. How have you managed to ensure that you are at the forefront of each area?

The Icelandic market is small and professionals rarely get the chance to limit their practice to one area. My main practice areas are IP, competition and property law and it takes considerable effort to keep at the forefront of all areas. I find that lecturing at the University of Iceland and overseeing both BA and MA dissertations is a great way to ensure that I am completely up to speed.

In respect of the other areas, my expertise derives from work that I have carried out over the years. I have been appointed to several governmental working groups, committees and commissions by the respective ministers dealing with the areas of law in question. For example, I was part of a group of experts formed by the minister of education, science and culture in 2008, which wrote a bill for a comprehensive Media Act. It combined all of the provisions on different kinds of media into one legislation and transposed the new EU Audiovisual Media Services Directive (2010/12/EU) into Icelandic law. The bill was passed in 2011 and I was simultaneously appointed to the Media Commission and later became its chair. Participation in work of this kind has enabled me to develop expertise in fields other than my main practice areas. This greatly benefits my clients, as more extensive knowledge allows for a broader view of matters when needed.

Drawing on your experience in various forums, what are the key skills that a trademark litigator should possess, and how can these be honed?

In addition to having vast knowledge of trademark law, trademark litigators must be skilled in procedural law and practice, strategic and resourceful. Moreover, in Iceland, litigators must be accomplished in deposing witnesses as depositions are part of the main proceedings before both the district courts and the appeals court. Thus, a litigator must be a good judge of character and must be able to make instant decisions on how to proceed depending on the answers given. Becoming an outstanding litigator takes practice and each case adds new experience.

You are also a lecturer in IP, property and contract law. How does this contribute to your professional development, and why should others consider engaging in such activities?

I find lecturing and other academic activities the optimal means of keeping up to date on developments in my practice areas. In addition, it is inspiring to be around the legal minds of the future – which often see matters from a different perspective – and rewarding to play a role in their education. On a more pragmatic note, it is also a great recruitment tool and allows me to spot promising candidates for open associate positions at LEX.

Looking ahead, what do you see as the major upcoming developments in the Icelandic trademark environment?

In the past decade Iceland has become incredibly popular as a tourist destination and, as a result, has attracted increased international attention. This has led to growth in both foreign filings and enforcement by foreign rights holders. I believe that we will see a further increase in that respect in the years to come. In regard to developments in legislation, the most significant foreseeable change will be the amendment of the Trademark Act to transpose the EU Trademark Directive (2015/2436/EU), which will, among other things, change the graphical representation requirement.

Hulda Árnadóttir heads LEX Law Offices’ trademark practice and is managing director of LEX’s subsidiary, IP boutique GH Sigurgeirsson IP. Ms Árnadóttir is an accomplished litigator and has tried numerous IP cases before the Icelandic courts. She is also a lecturer in IP law at the University of Iceland and a frequent speaker at IP-related events. Ms Árnadóttir has been ranked as a top lawyer by the WTR 1000, Chambers and the Legal 500.