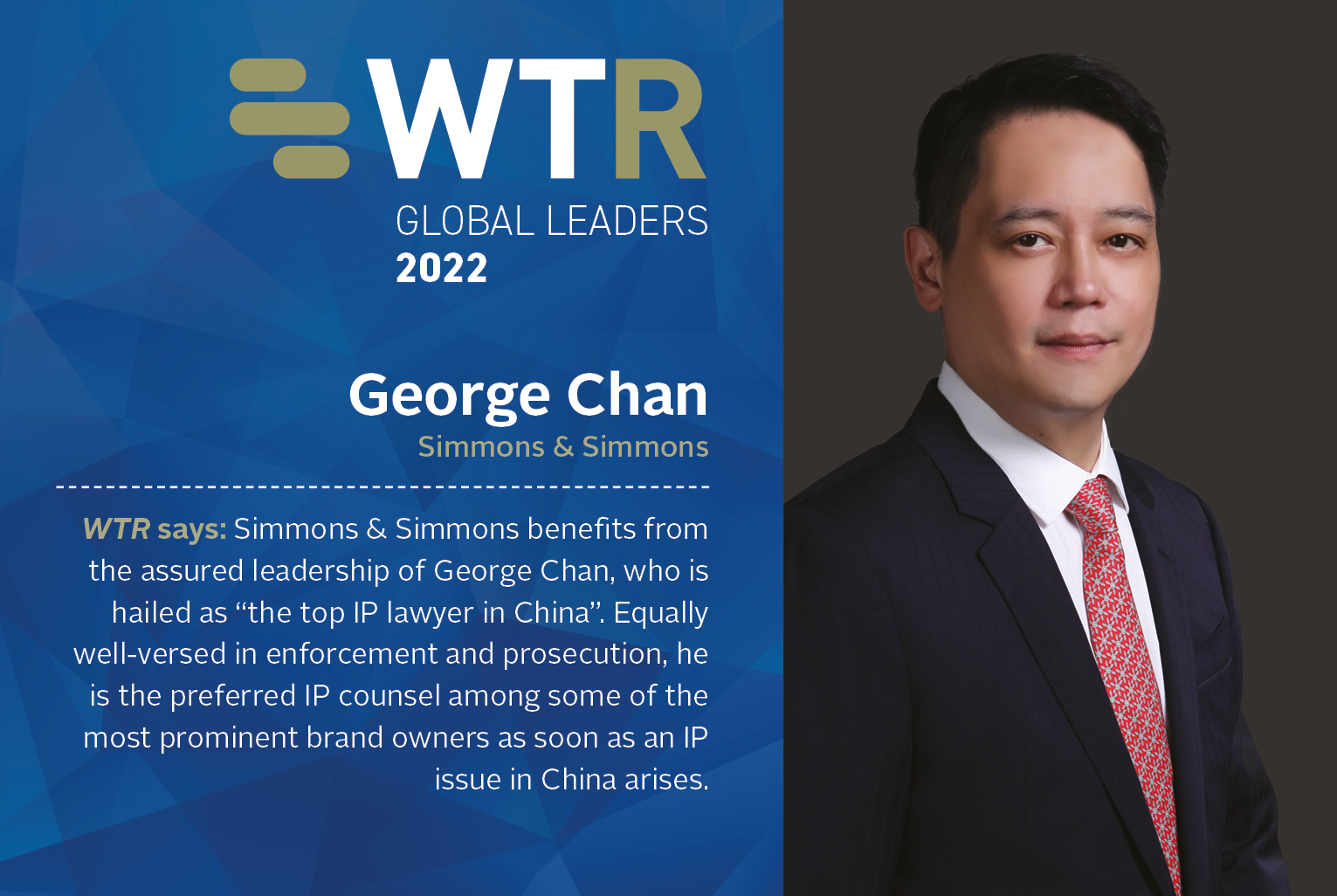 You joined Simmons & Simmons as a partner in 2014, when you led the launch of the Simmons & Simmons (Beijing) Intellectual Property Agency. Which three key takeaways have you learned about effective management in this role?

First, empower your people for growth and development, by building more autonomy into your workplace. Second, ive your people time to develop. Real change takes time. Finally, if your objectives and goals are genuine, you can trust your instincts and intuition.

You have often talked about your sense of optimism. How is this embodied in your day-to-day work?

Finding a purpose in life is a good foundation for optimism, and I think this applies equally to work. To this end, I focus on IP law as being a way of giving value to what makes humans special, and using this to reward people for their extraordinary contributions. Shakespeare may have written “let’s kill all the lawyers”, but I think he would have benefitted from having a good copyright lawyer, who made certain that he received the recognition and rewards that he was due during his lifetime. The same could be said about Mozart. There is also Johannes Gutenberg who gave everything he had to develop the printing press and who died penniless. His ending is especially sad when you think about how his invention is credited for changing the course of history. Shakespeare, Mozart, Guttenberg and others deserved better endings, and I think they would have benefitted from our modern IP legal system. From this perspective, I think it is easy for IP lawyers to be optimistic.

Late last year, China’s State Administration for Market Regulation threatened to revoke the operating licences of platforms that fail to take proper action against counterfeiters. What impact - if any - do you expect this move to have on levels of counterfeiting in China?

You have been hailed as “the top IP lawyer in China”. How do you stay at the top of your game?

This is a humbling question, which I would qualify with my own opinion that there are some exceptional IP lawyers in China that may be more worthy of such praise. However, if you were to ask me how I try to stay relevant in my profession, I think that it is important to stay abreast of recent developments and, even more important, remain committed to finding innovative and creative solutions for your clients’ problems. Our clients are very sophisticated and they have seen the same arguments applied again and again to their problems; this being the norm, if you can deliver results through a creative application of the law or find a way to push for change, this gets their attention.

Despite the China National Intellectual Property Administration (CNIPA) reiterating its determination to crack down on malicious filings, bad-faith trademark filings increased by more than 3,000% in 2021 according to statistics released by the authority. Is the CNIPA using the right strategy to combat this phenomenon?

The CNIPA has recently issued measures for the fast-track examination of trademark applications for trial implementation, but there have been concerns that the relevant requirements weigh against foreign applicants. Are these concerns justified?

Do you think IP rights were adequately protected during the Beijing Winter Olympics?

I think that China did a good job of protecting Beijing Winter Olympics IP rights. On the trademark squatting front, the CNIPA rejected many malicious trademark applications that targeted the Beijing Winter Olympics mascot Bing Dwen Dwen and Chinese Olympic star Gu Ailing (Eileen Gu’s Chinese name). Counterfeiting was also addressed, with several reported criminal convictions for the counterfeiting of Beijing Winter Olympics paraphernalia, including one case in which a counterfeiter received a one-year prison sentence and a Rmb40,000 ($6,290) fine. The crackdown on counterfeit Olympic paraphernalia had a knock-on effect resulting in high demand for Bing Dwen Dwen stuffed toys, with the topic of “too hard to get a Bing Dwen” trending on Weibo (China’s equivalent of Twitter). The shortage could be attributed to a shortage of genuine Bing Dwen Dwen stuffed toys that were only available from official authorised dealers.

The Chinese courts have been more active in applying punitive damages in trademark cases in the past couple of years. What advice would you give to rights owners looking to claim punitive damages?

Last year you expected that trademark squatting in China would finally begin to be reined in through the collective efforts of the government, the courts, the CNIPA and brand owners. Is the country on the right path?

George Chan is a partner in the China dispute resolution group and head of the Simmons & Simmons (Beijing) Intellectual Property Agency. He is a leading authority on intellectual property in mainland China and leads a veteran team that specialises in securing and enforcing IP rights, as well as advising on commercial and regulatory IP matters. Mr Chan is also at the forefront of the rapidly evolving field of online branding in China.