Patent data from the USPTO reveals that female participation in US innovation is on the rise, but parity remains a long way off

The USPTO’s 2022 report “Where are US women patentees? Assessing three decades of growth” indicates how the innovation landscape has shifted in the United States in recent decades with respect to women’s participation. The report focuses on the number of female inventors named on patent applications between 1990 and 2019, and how and why women’s participation in innovation has been able to grow in the last 30 years. Unfortunately, similar data is not available for trademarks, due to the lack of named individuals on applications, but the patent data offers some useful indications as to rate of progress and the reasons behind this.

The good news, according to the report, is that the number of US counties with female inventor patentees grew by nearly one-third over the last 30 years. Among those that already had female inventor patentees in the early 1990s, the number increased by as much as 2,500%. In Benton County, Arkansas, for example, the number of female patentees increased from just one in 1990-1992 to 26 in 2017-2019. For Hendricks County, Indiana, the figure climbed from one to 13. Focusing on the top 10% of counties with female inventors who patent, the average number per county grew from 34 (in 1990-1992) to 209 (in 2017-2019).

When it came to individual industries, growth in female inventor patentees increased across all of the country's largest technology hubs, ranging from 1,781% in its human necessities hub to 4,288% in its physics hub and 7,054% in its electricity technology hub.

The bad news is that women are still grossly underrepresented, even in technology hubs with high female patent participation. For example, women accounted for 4,212 named inventors from the aforementioned physics hub and 3,291 from the electricity technology hub in 2019 – yet these figures still only represent 12% of all inventor patentees from these hubs. According to an earlier USPTO report, “Progress and potential: 2020 update on US women inventor-patentees”, the total share of women among all inventor patentees nationally was a mere 12.8% in 2019. 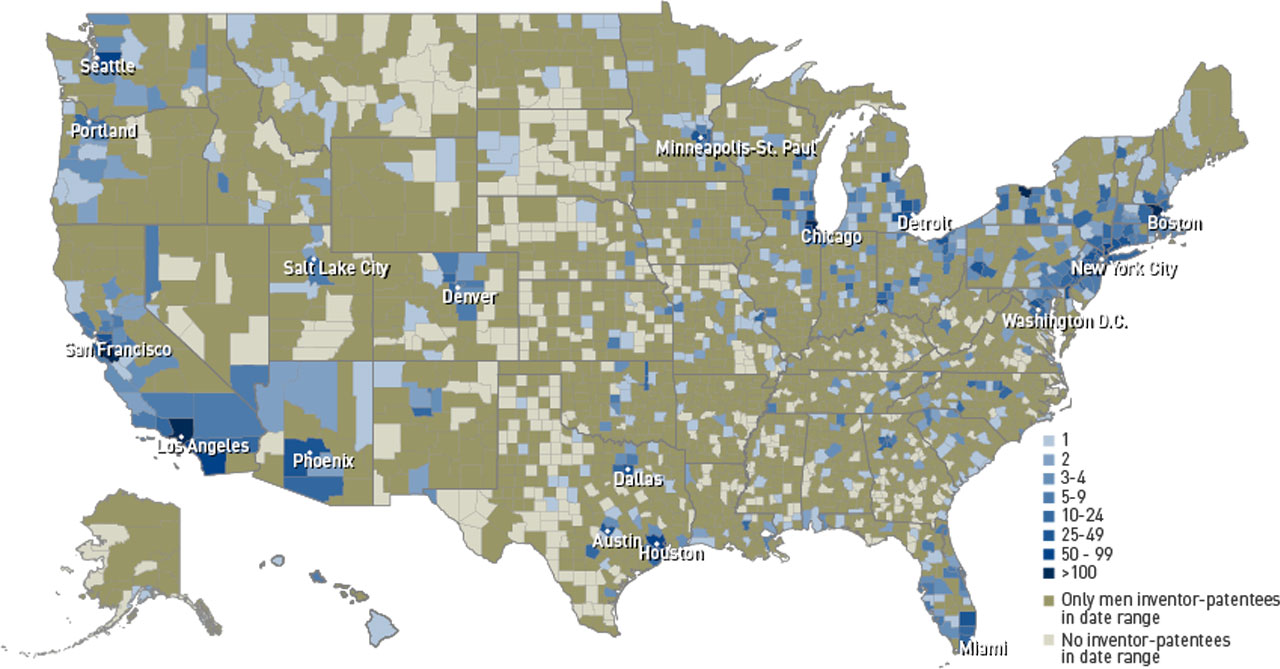 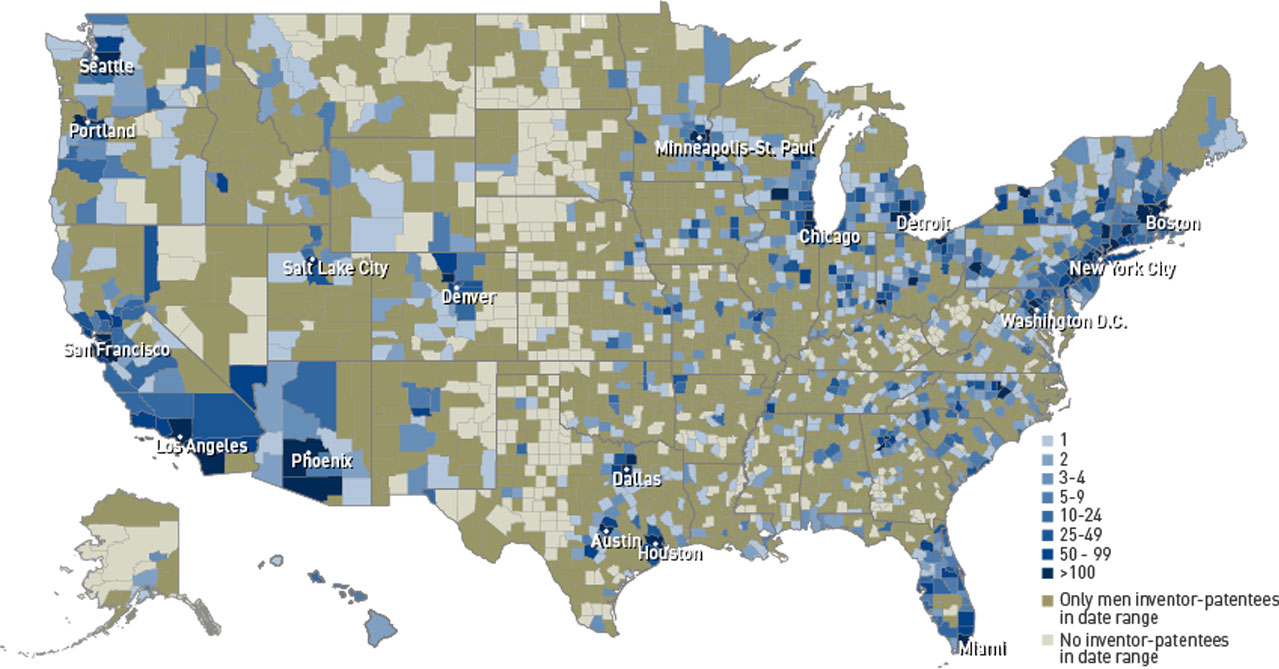 An analysis of counties with high levels of female patent participation reveals myriad socioeconomic conditions in common. Most significantly, the report shows that counties with female patentees have larger labour markets and higher incomes than those without them.

Counties with female inventor patentees have 630% more labourers and a positive income difference of 22%. (The report also found a positive correlation between the size of a county’s labour force and growth in female patent participation over time.) As the report notes, third-party literature suggests that this correlation can probably be attributed to certain advantages that are likely to be especially important for female inventors. For instance, larger workforces may provide greater opportunities to build networks and trusting relationships, as well as more availability of childcare options – given that women still make up the majority of household caregivers, they are more likely to be affected by the presence or absence of affordable childcare.

Empirical studies also show a relationship between local per capita incomes and female participation. According to the report, a $50,000 increase in a county’s per capita income correlates to one additional female inventor patentee.

The report also finds a connection between higher education rates and female patent participation. Specifically, in counties with female inventor patentees, 12 women per 100 workers had bachelor’s degrees. Meanwhile, there were only eight women with bachelor’s degrees per 100 workers in counties without female inventor patentees.

If a county were to double its number of female college graduates, the likelihood that it would then produce its first female patentee would increase by 61%, the report states. This figure is lower for women with PhDs; doubling the number of women with PhDs would lead to a 20% greater chance of producing the first woman patentee. However, this difference merely reflects the fact that there are more women with bachelor’s degrees than PhDs. When it comes to the likelihood of a county producing its first woman patentee, the addition of one woman with a PhD is, in fact, equivalent to adding 10 women with bachelor’s degrees. In short, counties with more women in higher education are more likely to produce female patentees than those where further education is less common and less extensive for women.

Data in the USPTO’s 2020 and 2022 reports shows a clear and important distinction between female participation and female parity.

For example, there are many women patentees in both the physics and electricity technology hubs, and there has been significant growth in these numbers over time. However, these technology hubs are not necessarily the ones in which female inventor patentees are best represented.

According to data from the 2020 report, the three US companies with the highest share of female inventor patentees between 2007 and 2019 were those that produced diversified healthcare products and pharmaceuticals. Procter & Gamble led the way with a 29% share of female patentees. This is consistent with the findings of the 2022 report, which found that Middlesex County, Massachusetts, the country's main chemistry hub, had the greatest share (21%) of female patentees in 2019, although it only ranked third in terms of female participation.

This divergence suggests that there may be factors other than unfavourable economic and educational conditions that are holding women back.

The deficit in female parity is a concern for many reasons. As the 2022 report notes, some economists suggest that if women were to patent at the same rate as men, the United States’ per capita GDP could increase by as much as 2.7% and its number of commercialised patents by 24%.

There are also many compelling, qualitative reasons why greater female parity in innovation is worth striving to accomplish. As the report stresses: 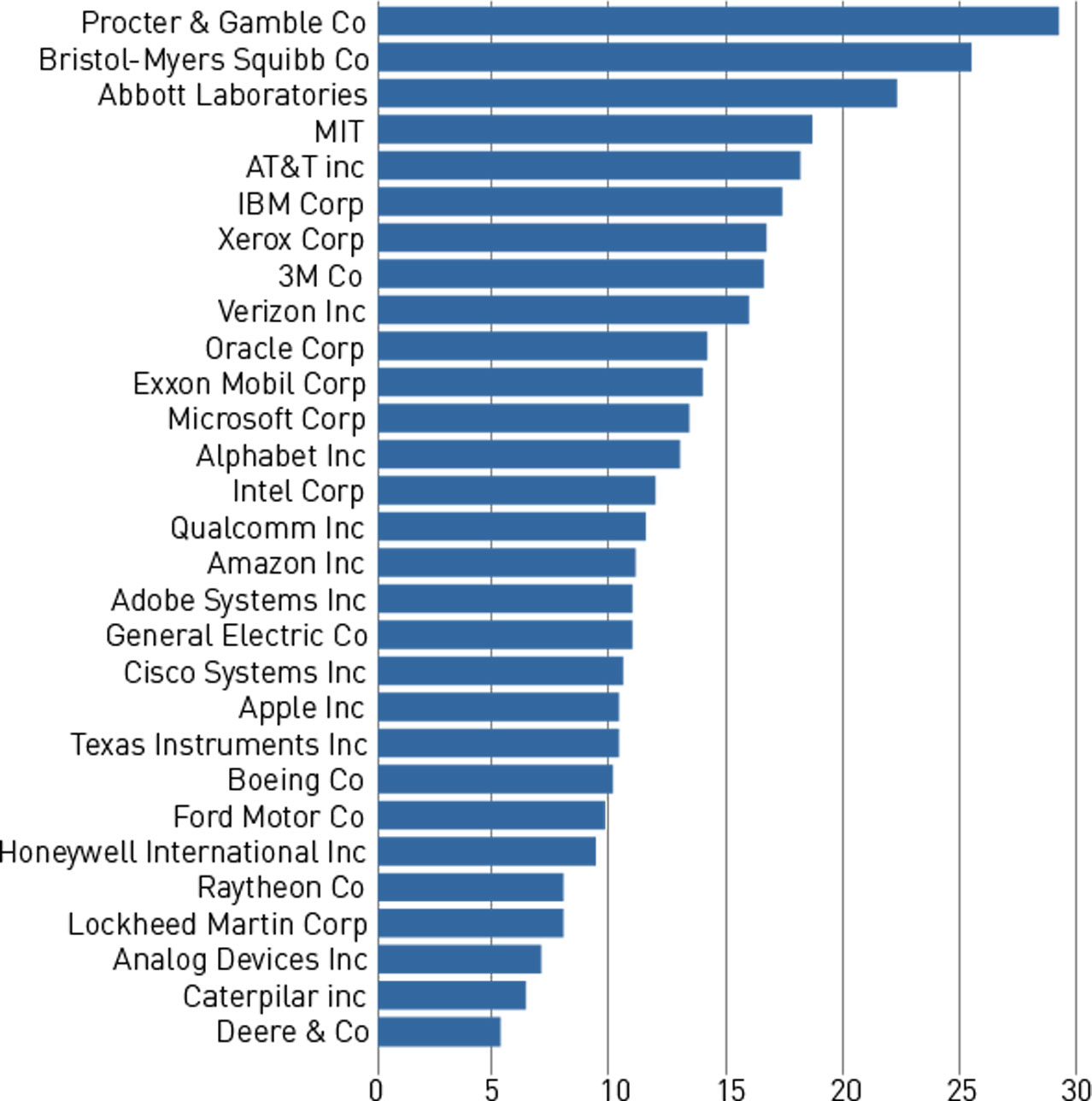 While growth in female patent participation in the United States between 1990 and 2019 is both a cause for celebration and a key source of information on socioeconomic conditions that could fuel further growth, it is clear from the report that women’s participation remains overly restricted to certain industries and geographic enclaves and that women do not yet have parity even where they do participate.

WTR Special Report Q4 2022: Building a better workplace: How to support diversity, equity and inclusion in the IP industry