The rise of Chinese filers is a global phenomenon – as Figure 1 demonstrates. Although this report focuses on the USPTO experience, it is instructive to compare activity rates elsewhere. Therefore, we turn our attention to the EUIPO.

In 2020 China became the number one filing country for EU trademarks and number two for registered Community designs (RCDs) – with EU trademark filings from the country up a staggering 89% year on year.

For the EUIPO, which does not have a use requirement and therefore has not encountered issues with specimens of use during the application process, the challenge instead revolves around managing the resulting workload. However, Chinese filers have actually been something of a boon for the office at a time when the covid-19 pandemic could have negatively affected filing levels and, by extension, revenue.

In February 2021 – one month after the USPTO’s scathing report – the EUIPO issued its own report. “China: EUTM & RCD Focus – 2019 to 2019 Evolution & 2020 COVID-19 Impact Analysis” takes a decade-long look at Chinese filing activity at the office, noting that while 2020 saw an acceleration of filings from China, the story goes back a number of years. 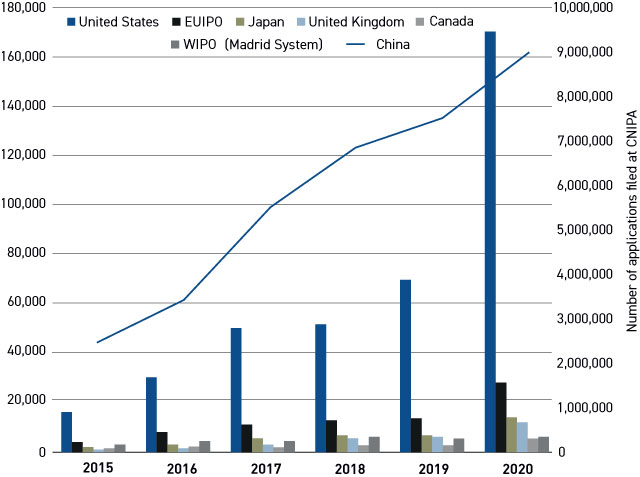 The EUIPO data focuses on the period between 2010 and 2019. Comparing the total number of filings for both years, it notes that the average annual growth rate for EU trademarks from Chinese applicants stood at 33.2%, with an overall growth rate of 1,028% across the period. In total, more than 63,000 EU trademark filings, including over 116,500 goods and services classes, were filed by more than 47,000 individual Chinese applicants throughout the decade.

On 1 January 2020, around 55,000 EU trademark registrations from China, covering more than 103,000 associated goods and services, were in force. Class 9 (electrical apparatus; computers) accounted for one-fifth of all Chinese EU trademark class filings.

Despite being part a long-term trend, filing activity soared in 2020 – as illustrated by Figure 2.

The EUIPO report notes that direct RCD filings from China also experienced notable annual growth over the past decade (31.4%), with an overall growth rate of 890% when comparing 2010 and 2019 filing volumes. According to the data set, almost 21,000 applications, with an average of 2.7 designs per application, were submitted to the EUIPO during the period.

One notable characteristic of the Chinese filings landscape at the EUIPO is that, despite well-known brands heading the list of top filers on an annual basis, the overall rankings are dominated by small entities. Table 1 reveals the top five Chinese applicants for each of the past five years.

Considering the entire 2010-2019 period, the EUIPO report notes that while Huawei Technologies tops the list of applicants by overall number, the picture is a fragmented one. The top 10 applicants collectively represent only 4% of overall EU trademark filings from China, with SMEs dominating the full list.

There is also the fact that the 2020 spike in applications benefitted the office’s coffers considerably. When covid-19 first hit at the beginning of the year, the EUIPO experienced a sharp decrease in filings, shortly followed by a strong recovery. The office attributes much of this to Chinese applicants, which ended the year filing 89% more applications than in 2019.

At a time when a number of other top filing countries, including the United States, either stagnated or decreased their demand for EU rights, Chinese filers helped the EUIPO to finish 2020 with 10.2% growth in overall EU trademark filings compared to 2019.

Reflecting this, the EUIPO report concludes: “The office will closely monitor the evolution of filing volumes from China and other countries in order to properly adjust strategies and capabilities aimed at continuing to meet the needs of its users with excellent quality and timeliness.”