The Gleissner Oppositions, published in 2018, revealed that of the 479 opposition cases before the UKIPO between January 2017 and February 2018, at least 34 (ie, 7%) involved marks filed by Gleissner-related entities. In fact, 13 of the 98 decisions made in the first two months of 2018 (13.2%) were against Gleissner marks.

The multi-millionaire prevailed in just 17% of these cases, with partial success in a further 6%. This low success rate was reflected in legal costs. By early 2018 Gleissner had been ordered to pay £67,301 in legal costs, including £38,085 to Apple for “abuse of process”.

Major brands also featured among the oppositions in which Gleissner prevailed. For example, entertainment company TiVo was unsuccessful in preventing Gleissner-related Vivo International from registering the TIVO mark in 2017, while Starbucks Corporation failed to stop Verismo International’s application for VERISMO from proceeding to registration.

That said, Gleissner received a relatively low amount of legal costs during this period. One reason for this was because – in at least three cases – he had failed to fill out the correct paperwork. 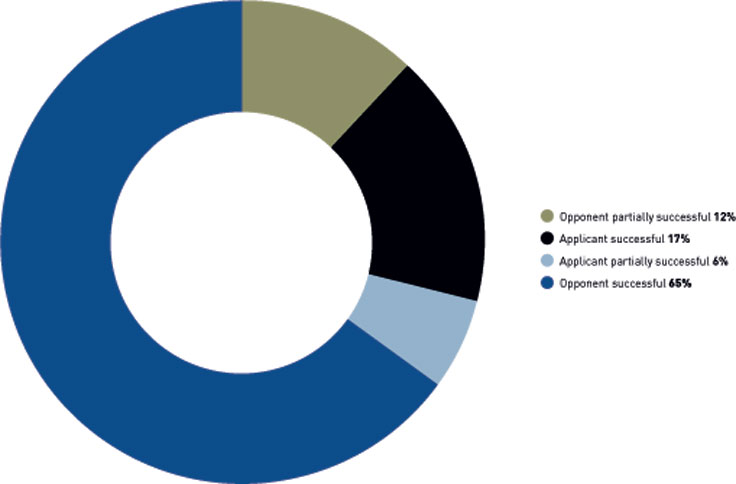 By mid-2018, most oppositions against Gleissner-related marks had been lodged by small businesses, although some well-known brands had been successful, including Eurosport, Rockefeller University, Sky TV and Xero.Many of these oppositions succeeded on the grounds of bad faith.

Court data also revealed that any opposition against a Gleissner-related mark that included a mention of “Michael Gleissner” in the decision – often because his wider activities had been brought up in evidence – always led to success for the opponent.

While this ‘Gleissner effect’ seems resounding, it is worth bearing in mind that, of the 34 oppositions between January 2017 and February 2018, only five (15%) actually mentioned Gleissner.

Maria Didier, managing director of online store Rouge Bunny Rouge, took on the Gleissner entity Vesper International in September 2017, unaware that the multi- millionaire was behind the action. Despite her success, Didier looked back on the opposition as an arduous battle. “I was surprised that the opponent would be ready to ‘fight’ the case in such a serious way,” she admitted.

Others have also faced this no-holds-barred approach. “In the cases that I have been involved with, the trademark-owning companies have not appeared to trade and they refuse to enter into pre-action discussions to try to find an amicable resolution,” revealed Gareth Price, a trademark attorney at Urquhart-Dykes & Lord, who has been involved in a number of opposition proceedings against Gleissner.

As well as failing to respond to pre-action discussions, Price has found that Gleissner pleadings, “both in the form of counterstatements and notices of opposition, tend to be based on templates and include often irrelevant, boilerplate statements, as well as errors”.

The whole situation has been made more difficult by the burden of proof required from opponents in the United Kingdom. Often, “when an opposition is filed, the Gleissner company will file a very brief counterstatement, and then nothing further”, stated Novagraaf trademark attorney Claire Jones. Opponents must therefore invest considerable time and expense filing evidence of bad faith and reputation. Even if they are successful, they are “then forced to monitor actual use of the mark going forward” – costing them even more.

Opponents have also reported issues around recovering the legal costs that Gleissner entities have been ordered to pay. Of all the successful parties that WTR spoke to during the course of research, only one had been paid – and even that took several months and required issuing a reminder. Due to the often low amounts issued, most rights holders do not see it as cost-effective to chase payment.

Why IP offices have not responded

Business owners and trademark practitioners have admitted that they long for a more vocal response from national IP offices. However, the general consensus is that action is unlikely.

“Even though registration authorities are aware of the activities of Gleissner, they have taken no effective steps to prevent this obvious abuse of the system,” stated Margaret Briffa, an IP lawyer for UK-based firm Briffa, in 2018.

One reason for this is because the evidential burden to rebut a claim of bona fide intention to use a mark is extremely high and difficult to prove. It would require a complete overhaul of the ways in which the courts examine pleadwings to stamp out such bad-faith activity.

While it is therefore frustrating that fighting Gleissner applications requires so much time and resource, the burden appears unavoidable for many opponents.

What is more, decisions against Gleissner have been relatively uncritical and the costs issued – generally ranging from £100 to £1,200 – have reflected that.

The UKIPO’s 2018 decision against a Gleissner-related application for TRUMP TV stands in stark contrast to this trend.

Of particular note was the scathing language used by the hearing officer. Gleissner’s company was blasted for having “a disdainful disregard for the opposition costs of the other side” and ordered to pay over £15,000 to DTTM Operations LLC, a New York-based entity handling the intellectual property of Donald Trump and his family.

When considering whether off-scale costs were warranted, hearing officer Matthew Williams stated: “I particularly bear in mind the well-evidenced pattern of abusive behaviour on the part of Mr Gleissner and his related companies,” adding: “It is possible that the applicant saw nothing wrong in its behaviour, but that changes nothing, since its behaviour must be judged against an objective standard. Looked at in that way, I have no doubt that the applicants acted unreasonably.”

Such strongly worded criticism is rare in a UK opposition and at the time there were hopes that this might indicate a turning point in the authorities’ response to Gleissner. However, there has been little sign of an agency-level move to tackle his activity.

“This is not a problem that any individual lawyer or trademark owner can handle,” reiterated Briffa. “It requires the authorities across multiple jurisdictions to come together, review and use any power they have to ensure that the trademark systems in place are used in the way in which they were intended and not for abusive purposes.”