One beneficiary of rising Chinese filing levels is Jonathan G Morton, who topped the list of representatives filing trademarks at the USPTO in 2020 by a considerable margin (see Figure 1). According to data available on 15 January 2021, Morton oversaw 21,956 applications in 2020 – more than the number of applications that the entire IP Office of Singapore receives in a year. Of these, 21,440 originated from China. Compumark data also reveals that Morton’s full list of 2020 clients included over 11,000 businesses, 8,500 of which filed just one US mark.

Morton even managed to file 600 applications on the last day of the year – a number that would take a US examiner approximately two-and-a-half months to review (based on a target of eight applications per day). This is a staggering number and, speaking to WTR in January 2021, Morton admits that he is not sure how the team managed to cope with the “insane” workload in December. But this end-of-the-year flurry – likely timed to avoid the USPTO fee rises for trademark applications, which came into effect on 2 January 2021 – was the second notable spike in filings last year. 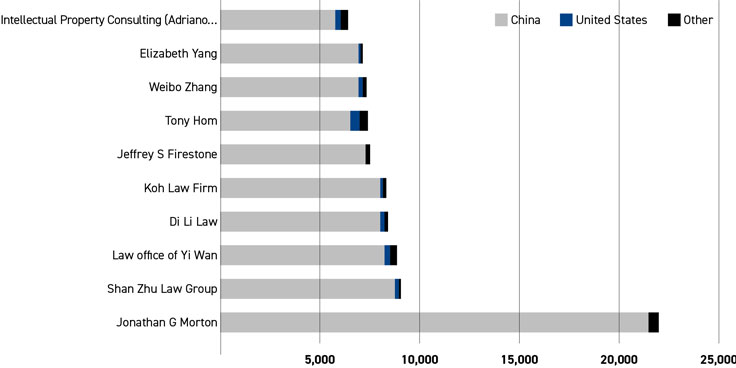 In an interview with WTR in late 2020, Morton noted that the workload from Chinese clients jumped in August and September 2020 due to an increase in USPTO patent fees, which came into effect on 2 October and created a surge in trademark applications as applicants feared a similar move on the trademark side. According to Compumark data, on 29 September 2020 Morton was named as the representative on 284 applications – one every 5.1 minutes for 24 hours. And in the last week of September, he was named on 1,400 – one every seven minutes for an entire week.

“During the summer months it was still unclear whether the USPTO was going to also raise trademark fees along with patent fees, so many Chinese applicants decided to apply early just in case trademark prices also increased,” he told WTR. “As a result, my team and I had to work enormous hours every day, seven days a week for almost two months. Fortunately, after 2 October our clients’ filings slowed down to normal rates so we have been able to get back to our usual working hours.”

Morton admitted that this extreme level of activity over the summer months made it difficult for the team to keep on top of the relevant paperwork. “We experienced many challenges while preparing and submitting the high volume of applications in August and September, but in the end there is only one way to do the work – painstakingly going through each submittal one by one until I was personally satisfied with each and every application. Normally we do not have this situation and we knew that filings would drop off in early October, so this helped motivate us to keep focused on the quality of each submission despite the fatigue.”

Morton is no stranger to significant filing levels, having been the USPTO filing representative on many of Gleissner’s applications.

When it comes to Chinese filings, one boon to his practice was the USPTO’s rule change in August 2019, which required trademark applicants that are not domiciled in the United States to engage US-licensed attorneys to file and prosecute their applications. The stated reason for the rule change, according to the USPTO, was to combat suspicious trademark applications originating from China.

Eight months later, Morton told WTR that an increase in prosecution work was proof that the rule change was working. “The new rule has increased our workload globally – particularly in China – and it’s been a very positive move for the foreign clients that would normally file without the assistance of a licensed US attorney, as they are now being exposed to many new legal doctrines that they were previously unaware of. Many errors and omissions made in the past are now being corrected through education and guidance; hopefully, this will help the USPTO to prosecute applications more efficiently.”

One point of interest, however, relates to the addresses listed on Morton’s applications. According to Compumark analysis, Morton has used dozens of Chinese addresses across nearly 18,000 applications – including for applicants that state their location is in the United States, the United Kingdom, Canada or Australia. In addition, a number of addresses listed by Morton appear to have been previously used by representatives who, in accordance with the August 2019 rule change, are no longer qualified to represent foreign clients at the USPTO.

When asked about three such addresses, Morton acknowledged that all were long-term clients and that the names used were current or former employees within the respective organisations. Thus, he has now become the named correspondent on applications for these organisations.

One thing is clear: despite the numerous questions and challenges raised, the demand for US trademarks has created a business opportunity for those positioned to capitalise on it.