Print article
European Union
Legal updates: case law analysis and intelligence
In Sony Ericsson Mobile Communications AB v Office for Harmonisation in the Internal Market (OHIM) (Case R443/2010-2, September 23 2010), the Second Board of Appeal of OHIM has annulled the examiner's refusal to register a movement mark on behalf of Sony Ericsson Mobile Communications AB, holding that the mark, in conjunction with its description, met the criteria set out in Article 4 of the Community Trademark Regulation (207/2009).

Sony sought to register a movement mark illustrated in a sequence of 20 stills as a Community trademark: 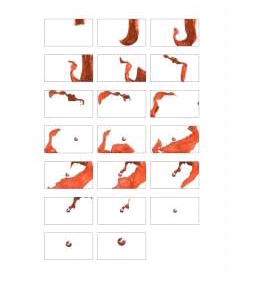 It provided the following written description of the sequence and of the motion that it was intended to represent:

“The trademark is an animated sequence consisting of 20 stills that make up the sequence which runs within a timeframe of approximately six seconds… The sequence shows a coloured stream of liquid which flows across the screen against a white background. The stream of liquid ultimately flows around and into the interior of the sphere which allows the colour of the liquid to be seen.”

The application was refused by the examiner for non-compliance with Article 7(1)(a) of the regulation, since she considered that it was not possible to grasp the movement from the images shown in the graphic representation of the mark. Further, she held that the images did not show a clear and unambiguous sequence of movement, but rather isolated fragments which were not connected to one another.

In spite of Sony's filing a more detailed description of the mark and the movement involved, the examiner maintained her objections to the application. In addition to her previous objections, she referred to the criteria for assessing a mark's capacity to distinguish set out in Dyson Ltd v OHIM (Case C-321/03). Upon viewing the 20 stills which made up the movement, in conjunction with the new description supplied by the applicant, the examiner found that the images did not indicate a clear movement and that it was impossible for the observer to detect a clear flowing movement. She noted that no mention was made of certain of the stills in the amended description and that, in her view, the description did not greatly assist in comprehending the movement.
In its appeal to the Second Board of Appeal, Sony submitted, among other things, that:
Sony submitted that OHIM could have constructed a flip book to enable it to understand the mark, and pointed out that the mark had been accepted by the US Patent and Trademark Office.
The Board of Appeal held that, where a sign was defined by both the graphic representation and the textual description, in order for the representation to be clear, precise, intelligible and objective, the description must coincide with what could be seen in the representation.

The board referred to other marks which had been accepted by OHIM and which also consisted of sequences of images which are complex and in which the animation “jumps” between the frames of the particular sequence. While noting that the examiners are not tied by previous decisions, the board also noted that, in the case of Sony’s mark, the amount of movement was rather limited and, therefore, it should not be too difficult for OHIM to be consistent in its decision making concerning these types of marks.

In any event, the board held that, leaving aside the flip book and concentrating on the stills in conjunction with the description, the movement was in fact quite clear and the counter clockwise sequence of the motion was not that difficult to follow based on the description given. Accordingly, it held that the representation and the description were perfectly compatible and complementary.

The board annulled OHIM's decision for inconsistency with its general practice and an incorrect application of Articles 4 and 7(1)(a) of the regulation, and remitted the case back to the examiner for further prosecution.