On March 10 2006 Red Bull GmbH applied for the registration of the following colour mark (Application Z-307435): 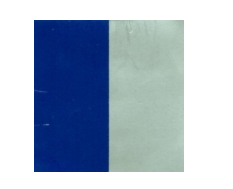 The application included the following description: "the mark consists of the colours blue (2/4/C) and silver (877 C), with each making up half of the sign". However, Red Bull did not specify how the colours would be displayed in the mark (ie, horizontally or vertically).

In 2008 the Patent Office granted a right of protection, indicating that the application included only two categories under the International Classification of the Figurative Elements of Marks (Vienna Classification): 29.1.4 and 29.1.6 (colours). In 2009 the Patent Office decided to correct the decision due to an "obvious clerical mistake" - the office based its decision on reproductions of the trademark that were attached to the application. The Patent Office decided that the mark applied for was a figurative mark which was divided vertically into two parts. The Patent Office further held that Category 25.5.1 (backgrounds divided vertically into two parts) should also be added: Red Bull itself had stated that each colour made up half of the mark, and the reproductions attached to the application clearly showed two rectangles placed side by side. The Patent Office also added Category 26.4.2 (rectangles).

Red Bull filed a complaint against the Patent Office's resolution before the Voivodeship Administrative Court in Warsaw. It claimed that the Patent Office should not have defined its trademark as a figurative mark, but as an abstract colour mark, as this term reflected its nature more accurately. Therefore, according to Red Bull, the Patent Office had erred in applying the categories of the Vienna classification. Red Bull further argued that it had been correct in including only a colour category in its trademark application. Finally, Red Bull claimed that the Polish Industrial Property Law and Article 15(1) of the Agreement on Trade-Related Aspects of Intellectual Property Rights allow the registration of combinations of colours in Poland.

The Voivodeship Administrative Court overturned the Patent Office's resolution, holding that it was unenforceable. The court ruled that both the doctrine and the case law state that a "clerical and accounting mistake/error" may be corrected only if the mistake is "obvious". An "obvious mistake" is one that is apparent, involves a deliberate misuse of the word at issue, or includes an erroneous spelling or omission.