Print article
United States of America
Legal updates: case law analysis and intelligence
A functional design is not properly the subject of a trademark registration in the United States. While it is possible for a product design to serve as a trademark once it has been established that the consuming public has come to view the mark as a source identifier (ie, once it has acquired distinctiveness), where the mark itself is functional, no showing of acquired distinctiveness will permit the applicant to claim exclusivity from a trademark perspective. That right is reserved for patents. In In re Van Valkenburgh (Serial No 77025789, January 7 2011), the Trademark Trial and Appeal Board (TTAB) affirmed the examining attorney’s refusal to register as a trademark the design of a motorcycle stand because of the functional nature of the design.
Charles Van Valkenburgh applied to register the design of a stand used to hold a motorcycle in an upright position (for use, for example, when maintenance is being performed). The design was described as consisting of “the three-dimensional configuration and associated trade dress of a motorcycle stand”. The applicant also relied on the following depiction of the mark, wherein the material shown in dotted lines was disclaimed: 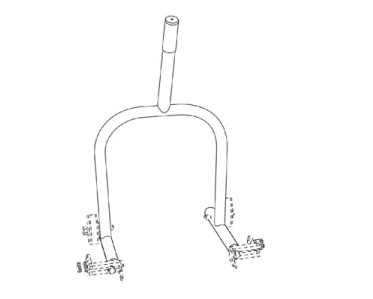 Thus, while the presence of the utility patent claiming the essential portions of the applicant's design mark was sufficient in the TTAB's eyes to refuse registration of mark, the additional evidence submitted by the applicant in support of its claim of acquired distinctiveness was fundamentally flawed and thus would not have helped the applicant overcome the refusal to register, even absent the patent.