'Mc' prefix does not constitute dominant element of marks

In IIC – Intersport International Corp GmbH v Office for Harmonisation in the Internal Market (OHIM) (Case T-502/07, May 18 2011), the General Court has upheld a decision of the Board of Appeal of OHIM in which the latter had found that the trademark MCKENZIE was not confusingly similar to the earlier trademark MCKINLEY in relation to bags and clothing.

Both marks are registered for a variety of goods, including different types of bags in Class 18 of the Nice Classification, and clothing, shoes, boots, gloves, caps and similar goods for outdoor activities in Class 25.

On the basis of these earlier rights, IIC-Intersport opposed a CTM application by The McKenzie Corporation Ltd for the following figurative sign:

The opposition was directed at the goods covered by the application in Class 18 (eg, leather goods, belts, parasols and a variety of bags and cases) and Class 25 (clothing, footwear and headgear). IIC-Intersport alleged that there was a likelihood of confusion between the conflicting marks in connection with all the goods in those classes under Article 8(1)(b) of the Community Trademark Regulation (40/94), now the Community Trademark Regulation (207/2009).

The Opposition Division upheld the opposition in respect of all the goods, with the exception of “leather and imitations of leather and goods made of these materials, belts and parasols” in Class 18. However, it held that IIC-Intersport had not provided proof that its marks had acquired a high level of distinctiveness on the basis of its reputation.

The Board of Appeal upheld the appeal against the decision and rejected the opposition in its entirety.

On appeal, the General Court held that the prefix 'Mc' could not be regarded as the dominant element of the marks at issue because it would be recognised by the relevant public as a prefix to many Scottish or Irish names which constitute trademarks, particularly in the clothing sector. The attention of the public would not focus specifically on that prefix; instead, the public would take into account the final parts of the marks.

The General Court also found that the marks had the same number of letters and syllables. However, the court concluded that:

Moreover, the court held that the visual aspect of the marks was of greater importance in the overall assessment because the goods at issue are usually evaluated visually prior to purchase.

Although the attention paid by the relevant public when buying the goods was not excessively high, and although a considerable amount of the goods in Classes 18 and 25 were identical or very similar, the General Court concluded that a likelihood of confusion could be excluded because the earlier marks did not - per se or on the basis of the public’s recognition of them - have a high degree of distinctiveness.

The General Court nevertheless found that the Board of Appeal had not examined the arguments put forward by IIC-Intersport before the Opposition Division to substantiate its claim that its marks had a high degree of distinctiveness; therefore, the board had committed a procedural error. However, the error was found to be inconsequential: the General Court decided that the facts and evidence would not have enabled the Board of Appeal to come to another conclusion.

The decision is, to a great extent, based on the factual assessment carried out by the General Court, but it will probably be perceived as being rather severe to IIC-Intersport. As the average consumer rarely has the chance to make a direct comparison between the marks, but must rely on his or her imperfect recollection of them, one could qualify the finding that there is only a low degree of similarity between MCKINLEY and MCKENZIE. The way in which the phonetic similarity was set aside could also be qualified; for example, the court did not consider a number of pre-sale or post-sale situations which could be susceptible to affect the consumer’s choice.

In light of the interdependence rule, one can also wonder whether the average degree of phonetic similarity and the weak degree of visual similarity between the marks could not have been offset by the high degree of similarity between the goods - if only as regards the identical goods. In any case, the General Court made it clear that a finding that the earlier marks had a high(er) degree of distinctiveness could have led to a conclusion that there was a likelihood of confusion. 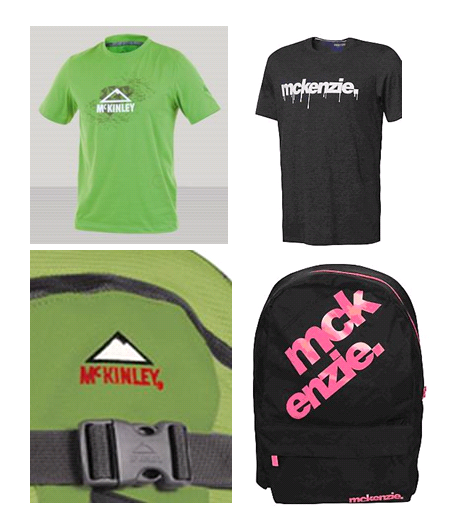