MARSEL marks found not to be geographically deceptive

On July 31 2015 UAB Active Management Group filed a first opposition (No PNZ-310) with the Appeals Division of the Lithuanian State Patent Bureau requesting a declaration that the national figurative trademark MARSEL (Registration No 68914) (depicted below), covering goods in Class 33 of the Nice Classification and owned by UAB ITALIANA LT, was invalid.

On September 15 2015 UAB Active Management Group filed a second opposition (No PNZ-321) with the Appeals Division requesting a declaration that the national figurative trademark MARSEL ORIGINAL (Registration No 69005) (depicted below), covering goods in Class 33 and owned by UAB ITALIANA LT, was invalid. 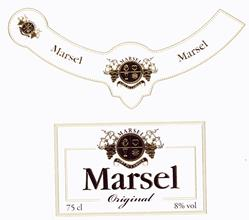 Both oppositions were filed based on absolute grounds under the Law on Trademarks of the Republic of Lithuania, which provide that a sign shall not be recognised as a mark and shall be refused registration, or a registered mark shall be declared invalid, if it consists exclusively of signs or indications which may serve, in trade, to designate the kind, quality, quantity, intended purpose, value, geographical origin or time of production of the goods or of rendering of the services, the mode of production or other characteristics of the goods and/or services (Article 6(1)(4)), and the sign is of such a nature as to mislead the public, for instance as to the nature, quality or geographical origin of the goods and/or services (Article 6(1)(5)).

The Appeals Division joined both oppositions because the parties and grounds for oppositions were the same.

The Appeals Division decided to reject both oppositions, so the national trademarks MARSEL and MARSEL ORIGINAL remain valid for goods in Class 33.

The decision was based on the following arguments.

Pursuant to Article 18(1) of the Law on Trademarks, within a period of three months following the publication of a registered mark in the Official Bulletin of the State Patent Bureau, an interested person may file with the Appeals Division a justified written opposition to the registration of the mark on the grounds that it may not be registered under Article 6 and/or Article 7 of the law. An interested person has the right to file oppositions based on absolute grounds only if its rights or interests, as protected by law, are being infringed.

Both oppositions were thus rejected due to the lack of interest of the interested person.

With regard to the essence of the dispute, the oppositions were based on Articles 6(1)(4) and 6(1)(5) of the Law on Trademarks - namely, the interested person argued that the contested trademarks MARSEL and MARSEL ORIGINAL consisted of geographical terms and could mislead the public as to the geographical origin of the goods (in Lithuanian, Marselis designates the French city of Marseille).

The Appeals Division indicated that the contested trademarks consisted of various elements (word, graphics and colours). Accordingly, it could not be inferred that the trademarks consisted solely of descriptive elements. The various elements created a sufficiently distinctive character. Even though the word element could be recognised as descriptive in respect of the registered goods, other elements provided the minimum level of distinctive character necessary for the registration of the trademarks.

When evaluating the word element ‘Marsel’ and its semantic content, it was necessary to take into account the following aspects:

The Appeals Division rejected the argument that the contested trademarks might mislead the public as to the geographical origin of the goods since the owner of contested trademarks is a Lithuanian company with its office address in Lithuania, and not in Marseille, France. It noted that consumers do not usually know the address of the producer. Moreover, this absolute ground related to potential confusion as to the geographical origin of the goods, not as to the official address of the trademark owner, which can be unrelated to the place of production of the goods.

Based on the foregoing, the Appeals Division rejected both oppositions.