General Court: OHIM should have carried out overall assessment of likelihood of confusion between vodka marks

On November 12 2015 the General Court rendered its decisions in CEDC International v Office for Harmonisation in the Internal Market (OHIM) (Cases T-449/13 and T-450/13). The cases were appeals from the decisions of the Fourth Board of Appeal of OHIM dated June 10 2013 (R 33/2012-4 and R 1734/2011-4). The General Court annulled the decisions of the Board of Appeal as it found, contrary to the board, that there was a low degree of similarity between the marks at issue.

In Case T-449/13, the intervener, Fabryka Wódek Polmos Łańcut SA, filed an application for registration of the figurative sign shown below on June 16 2006:

The application (CTM 5142039) covered goods in Class 32 ("mineral and aerated waters and other non-alcoholic drinks; fruit drinks and fruit juices") and Class 33 ("alcoholic beverages (except beers)") of the Nice Classification. The mark was registered on August 26 2008, and on April 6 2010 Przedsiębiorstwo Polmos Białystok - which was replaced by the applicant, CEDC International sp zoo, following a merger by acquisition on July 27 2011 - filed an application for a declaration of invalidity under Article 53(1)(a) of the Community Trademark Regulation (207/2009), read in conjunction with Articles 8(1)(b) and 8(5) of that regulation.

The invalidity claim was based on, among others, several earlier Polish and Community trademarks, including the following Polish three-dimensional marks (Nos 189866 and 208090), registered for "alcoholic beverages "in Class 33: 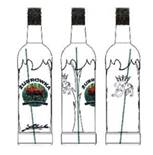 By decision of November 2 2011, the Cancellation Division of OHIM declared that the contested trademark was invalid on the grounds that there was a likelihood of confusion between that mark and the earlier Polish mark No 189866. It found that:

With regard to the similarity of the marks, it found that the marks were visually similar to a low degree and were conceptually similar as a result of the representation of a bison and the vertical display of a blade of grass inside the bottles.

The decision from the Cancellation Division was appealed and, by decision of June 10 2013 the Fourth Board of Appeal upheld the appeal and annulled the decision of the Cancellation Division as it found that the marks were not similar. The Board of Appeal therefore dismissed the case without making an overall assessment, as the existence of similarity between the marks at issue is a precondition for the application both of Article 8(1)(b) and of Article 8(5).

In Case T-450/13, the intervener filed an application for registration of the following figurative sign on July 7 2008:

The application covered goods in Class 33 ("vodka"). After publication of the mark on November 24 2008, CEDC filed a notice of opposition on February 17 2009 pursuant to Article 41 of Regulation 207/2009. The grounds relied upon in support of the opposition were those referred to in Articles 8(1)(b) and 8(5).

The opposition was based on several earlier Polish and Community trademarks, including the Polish three-dimensional marks Nos 189866 and 208090 registered for "alcoholic beverages" in Class 33 and shown above.

By decision of June 23 2011, the Opposition Division of OHIM held that the opposition was well founded under Article 8(5), as the earlier marks and the mark applied for shared minor similarities, both visually and conceptually, and the intervener would benefit unduly from the investments made by the opponent.

On August 23 2011 the intervener filed an appeal with OHIM against the decision of the Opposition Division. By decision of June 10 2013 the Fourth Board of Appeal upheld the appeal and annulled the decision of the Opposition Division as it found that the marks were not similar. The Board of Appeal therefore dismissed the case without making an overall assessment, as the existence of similarity between the marks at issue is a precondition for the application both of Article 8(1)(b) and of Article 8(5).

As the General Court came to the same conclusion in the two cases, both decisions are dealt with collectively.

Contrary to the Board of Appeal, the General Court concluded that the verbal element ‘wisent’ in the contested marks was not the dominant or most distinctive element of those marks. By its characteristics, the representation of a bison in the contested marks could not be considered to be negligible in the overall impression created by those characteristics. In this respect, it was to be remembered that a figurative element in a composite mark may rank equally with a word element (or above) when assessing the dominant or distinctive nature of the different elements.

Based on the figurative elements, the court found the marks to be visually similar to a low degree, and conceptually similar as they both pictured a bison.

Therefore, the board's decisions were vitiated by errors in the assessment of the visual similarity and of the conceptual similarity of the marks at issue. The Board of Appeal was wrong to conclude that the marks at issue were dissimilar by an overall assessment. As a result, the court stated that the Board of Appeal should have carried out an overall assessment of the likelihood of confusion within the meaning of Article 8(1)(b), or considered whether the other conditions set out in Article 8(5) had been met. Consequently, it annulled both decisions.