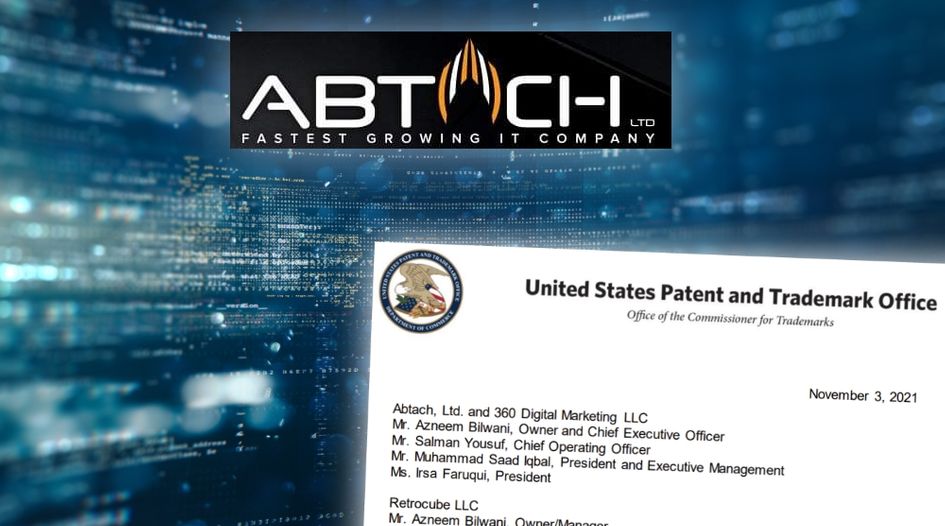 Just weeks after a major anti-fraud crackdown targeting Pakistan-based company Abtach Ltd, the USPTO has confirmed that thousands of trademark filings are now suspended and issued guidance for victims. The move is a reminder of the significant impact caused by the allegedly fraudulent entities operated by Abtach, the most notorious being Trademark Terminal.

Early last month the USPTO published a show-cause order to senior executives of Abtach Ltd and its subsidiaries 360 Digital Marketing and Retrocube. The companies were accused of violating the USPTO’s rules of practice related to dozens of low-cost trademark filing and design agencies, with a claim that the executives engaged in “an egregious scheme to deceive and defraud applicants for federal trademark registrations by improperly altering official USPTO correspondence, overcharging application filing fees, misappropriating the USPTO’s trademarks, and impersonating the USPTO”. The order listed thousands of trademark applications that were filed by entities allegedly operated by Abtach, and stated an intention to suspend them.

Now, the USPTO has published an update in which it confirms the thousands of applications listed in the order are now suspended. To that end, it urges applicants that have hired any of the below low-cost filing agencies to consider certain steps.

The below websites were allegedly created and operated by Abtach Ltd, of which the USPTO now says trademark applications linked to these entities are now suspended.

The steps listed by the USPTO for victims of the alleged Abtach fraud do not appear to lead to the revival of the trademark filings. The USPTO suggests victims check the status of their application (using the TSDR system) to see if it is suspended. If so, applicants “will not be able to make changes to the application”. Going further, the USPTO states “if the order terminates your application, the application is invalid and cannot be revived” (the final sanctions order against Abtach has not yet been released). Therefore, should they want to obtain registered trademark protection, the USPTO states that victims will need to file a new application – further clarifying that such filings will receive a new serial number, filing date, and cannot be expedited. Finally, the USPTO urges victims to ensure that their personal email address is provided on any new trademark applications (as Abtach firms notoriously did not provide the applicant’s contact details).

It appears, then, that victims that hired an Abtach-operated entity for trademark help will need to accept that those applications are all-but-lost. “If it’s clear that the USPTO made a mistake in including your application in the show cause order or the order for sanctions, you may file a petition to the director describing the circumstances and providing the relevant evidence,” the USPTO clarifies. “However, a petition merely requesting reconsideration of the suspension or sanction will be denied because the evidence identified in the order shows that application was invalid.”

Other options for victims to consider, the agency concludes, is to “contact your state’s attorney general”, “file a consumer complaint”, “contact the Federal Trade Commission (FTC)”, or “contact your financial institutions, such as your bank or credit card company, to determine if you can dispute the charges”.

This latest advice to victims comes at the end of a year dominated by low-cost trademark filings agencies that have been found to be operated by allegedly fraudulent companies based in Pakistan. The most prominent of these was Trademark Terminal, a platform that WTR first reported on in February 2021, with evidence that it was linked to thousands of US trademark applications, had spent thousands of dollars on Google Ads, and that a related entity allegedly defrauded one victim out of nearly $150,000.

The sheer scale of fraud campaigns targeting trademark users this year has been unprecedented, and so too has the response from the USPTO (indeed, just last week the agency terminated over 15,000 applications related to a China-based entity, Huanyee Intellectual Property Co Ltd, for repeated violations of US trademark rules of practice). While the hope is that these tough actions will work as a deterrent against other scam entities, it appears there’s little the victims outside of filing complaints and starting the trademark process anew.

The full list of trademark applications now suspended is available in the show-cause order, which can be read on the USPTO website.

Previous WTR coverage on issues related to Abtach-owned entities can be read below: