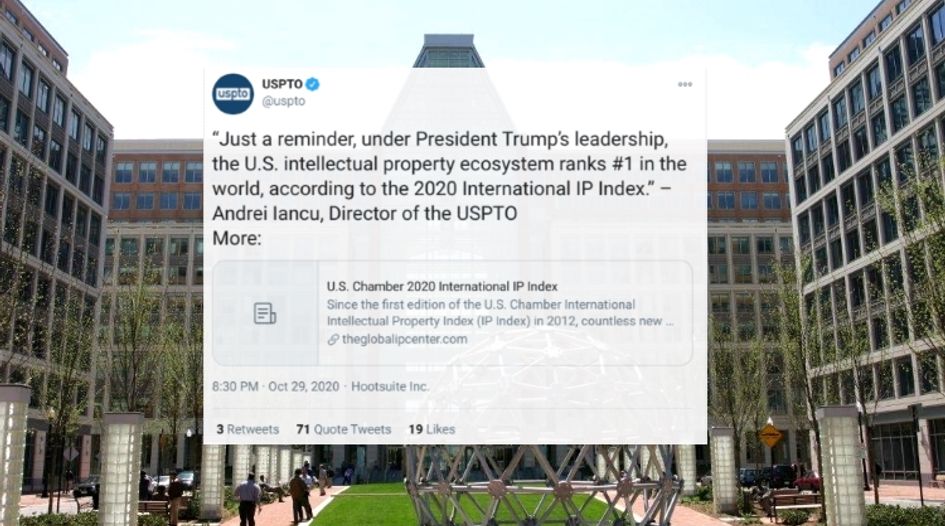 The US Patent and Trademark Office (USPTO) has faced an online backlash following social media messages, posted less than a week before the US election, that appear to praise President Donald Trump. In response, a USPTO executive tells WTR that they “disagree with those who would inject partisan politics” into the posts.

Yesterday, the USPTO published a message on its social media profiles – including Facebook (with 54,000 followers), Twitter (55,000 followers), and LinkedIn (49,000 followers) – with a quote from USPTO director Andrei Iancu. In it, he states: “Just a reminder, under President Trump’s leadership, the US intellectual property ecosystem ranks #1 in the world, according to the 2020 International IP Index.”

The social media post references the US Chamber of Commerce’s International IP Index, which assesses the IP environments of 50 leading world economies. As is referenced in the post, the United States topped the ranking when this year’s report was released in February 2020. The US also topped the list last year, and the year before that. In fact, the US has been atop the annual report’s ranking every year since it was launched by the Obama administration in 2012 (as the report appraises the global IP environment in specific reference to US policy, the country’s regime is therefore regarded as the gold standard).

Due to the post appearing to suggest that the current US president’s leadership is the reason for the US having a world-leading IP ecosystem, reaction to it has been broadly negative. Indeed, on both Twitter and Facebook, the posts garnered significantly more responses than an average post from the agency. A majority of the criticism was focused on users believing it is a sign that the USPTO is sharing a partisan message. “Inappropriate and disgraceful,” claimed one user on Twitter, while another asked: “I'm sorry, why is a non-partisan government account promoting a presidential candidate?”

Elsewhere, Irene Calboli, a professor at Texas A&M University School of Law, stated: “The US IP ecosystem has ranked excellently under many presidents before. Director Iancu should not use his official position and the ‘@USPTO’ account to campaign politically. Every single past US administration promoted the success of our IP system. Shame, the USPTO is not this.”

Going even further, Washington College of Law professor Christine Haight Farley suggested that it could be a violation of federal law. “Shame on Iancu for making the statement and shame on [the] USPTO for tweeting it.,” she posted, adding, “Just a reminder, under the Hatch Act, federal employees are prohibited from using their official authority to influence elections. The timing of the ‘reminder’ of Trump's ‘leadership’ and the false suggestion that our rank increased under his presidency are a bad look for the USPTO.”

Indeed, it is the date of the message – being less than a week before the US presidential election – that has further caused a stir. Responding to an enquiry from WTR, one trademark attorney who had publicly voiced his disapproval of the message on social media said: “My reaction was based on the ridiculous idea that Trump knows or cares anything about USPTO, and the obviously inappropriate timing of the tweet.”

However, some figures defended the USPTO’s posts. On the Patentlyo blog, law professor Dennis Crouch from the University of Missouri School of Law claimed that USPTO social media accounts have previously “promoted Obama as an innovation leader during his presidency”, adding: “I personally don’t think that this is a big deal and only barely a violation of norms, if at all. Trump has been president for four years, and his administration should get some credit for maintaining the #1 ranking.”

That perspective is not shared by Ann Bartow, law professor at the University of New Hampshire. She tells WTR that she “disagrees” with Crouch because Iancu “is potentially violating the Hatch Act and definitely violating USPTO norms if he posted or directed someone else to post this tweet”. She adds: “The director of the USPTO should not be politicising the USPTO’s Twitter stream. I also find the timing disturbing: it is too close to the election for this kind of partisan nonsense from someone who ought to be neutral to preserve the credibility of the USPTO.”

Incidentally, analysis from WTR finds that the USPTO has specifically mentioned ‘Trump’ five times on its Twitter account since the inauguration in January 2017 (including a photo of the signing of the 10 millionth patent, notifications of office closures, and Iancu wishing the President and First Lady well after their covid-19 diagnosis) and ‘@POTUS’ a further 39 times over that time period. For comparison, across the eight years of the previous administration, ‘Obama’ was mentioned 36 times on the USPTO Twitter account (mostly at ceremony signings, remarks about the America Invents Act, signing relevant laws, attending USPTO events, and job appointments) and ‘@POTUS’ was mentioned an additional 16 times (the @POTUS account was launched in 2015, so all previous references to the US president used his name).

For its part, the USPTO firmly denies any wrongdoing. In a comment to WTR, USPTO chief of staff Christopher Shipp said: “We disagree with those who would inject partisan politics into the message of the tweet, which is simply to highlight the continued excellence of the American innovation ecosystem.”

With just days to go before the election, people are particularly sensitive to perceived partisanship from governmental bodies. While the USPTO director is a political appointee (Iancu having been nominated by President Trump), the online response to the comment is a reminder that, despite the nature of the appointment, many users expect a nonpartisan approach by the agency.