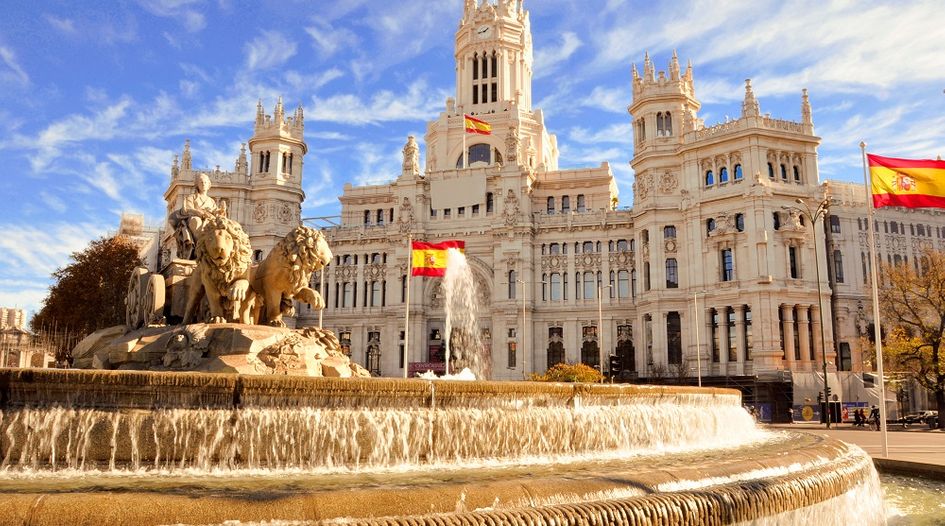 The Trademark Act follows the principle that trademark rights come into existence upon valid registration under the Trademark Act. However, the owner of an unregistered well-known mark has the right to:

Any natural or legal person, including public law entities, can obtain a Spanish trademark or trade name.

The Trademark Act also sets out that if a person applies to register a trademark in breach of either third-party rights or a legal or contractual obligation, the aggrieved party may claim the ownership of the trademark before the Commercial Court, provided that the claim is brought before the registration date or within a period of five years from publication of the notice of registration or the time at which the trademark is first used in Spain.

Article 4 of the Trademark Act establishes the requirements for trademark registration. It provides that a trademark may be any sign that is capable both of distinguishing in the market the goods or services of one undertaking from those of others, and of being represented in a way that allows the authorities and the public to determine the clear and precise object. It also provides a list of signs that may constitute trademarks, which are:

The following signs may not be registered as a trademark:

The following signs may not be registered as a trademark:

An ‘earlier trademark’ is defined to include:

The Trademark Act sets out relative grounds for refusal or invalidation in case of a conflict with identical or similar earlier registered trademarks and trade names that are well known in Spain or in the European Union. The protection afforded to such marks is extended beyond the principle of speciality: a trademark application will be refused even if the goods or services for which registration is sought are dissimilar to those for which an identical or similar well-known mark is registered. This reinforced protection applies if the use of the later mark might suggest a connection between the goods or services covered and the owner of the well-known mark, or in general where such use, without due cause, would take unfair advantage of, or be detrimental to, the distinctive or well-known character or reputation of the earlier mark.

Further grounds for refusal or invalidation are provided in case of other related early rights such as the name, surname, pseudonym or image of a person, copyright, unauthorised registration by an agent or representative, and company names, geographical indications and designations of origin in certain circumstances.

The trademark registration system is established in Articles 11 to 30 of the Trademark Act, and in the complementary regulation.

An application to register a trademark must be filed before the Spanish Patent and Trademark Office (SPTO) or another competent body.

If no oppositions are filed and the ex officio examination raises no objections, the trademark will be registered and published in the Industrial Property Official Gazette.

If objections are raised in the substantial examination, the proceedings will be halted and the applicant will be notified accordingly. The applicant has one month from such notification to submit arguments in support of its application, or to withdraw, limit, amend or split the application. Regardless of whether the applicant responds, the SPTO will decide whether to grant or refuse registration, specifying the grounds for its decision.

The SPTO will notify the applicant of the opposition and give a one-month term to respond. The applicant can request proof of use from the owner of the earlier trademark in the course of the five years prior to the date of application or priority of the subsequent trademark. If, in a one-month term, the opponent does not provide any evidence or it is insufficient, the opposition will be dismissed.

The SPTO will then decide whether to grant or refuse registration and publish its decision in the Industrial Property Official Gazette. Again, the decision may be appealed through an administrative appeal procedure within one month of publication.

However, of 14 January 2023, any final resolution of the SPTO (grant or refusal, among others) will be appealable before the Courts of Appeal of the specialised IP courts in the civil jurisdiction.

A trademark may be removed from the register by the SPTO or the commercial courts.

A trademark may be cancelled by the SPTO if it is not duly renewed (renewals must be made every 10 years) or if it is surrendered by the owner (the owner may surrender the trademark for all or some of the goods or services for which it is registered; surrender will not be permitted where this may affect the rights of third parties – for example, where the rights are subject to licences, attachments or call options).

The Commercial Courts of Barcelona, Madrid, Valencia, Granada, Las Palmas, A Coruña and Bilbao are the specialised IP courts in the civil jurisdiction and can invalidate or cancel a Spanish trademark. However, as of 14 January 2023, the invalidation and cancellation of a trademark may be sought before the SPTO or the commercial courts only through a counterclaim in a civil infringement action.

A trademark will be cancelled by a commercial court if:

A registration can be invalidated due to the existence of relative or absolute grounds for refusal.

Registered trademark rights may be enforced through the Commercial Courts of Barcelona, Madrid, Valencia, Granada, Las Palmas, A Coruña and Bilbao, and through any criminal court.

Among other things, the rights holder may seek the following civil remedies:

Compensation for damages will also include moral damages, the expenses incurred by the rights holder during the investigations carried out to obtain reasonable evidence of the infringement.

The Trademark Act sets no time limits for the pursuit of interim relief. However, as one of the criteria to be satisfied to obtain an interim injunction is urgency, the rights holder should file the corresponding request as soon as possible after becoming aware of the infringing acts.

These penalties can be extended for up to six years if, among other reasons, the crime has a special economic significance, or it has been committed by a criminal organisation or association.

The time frame for civil actions for the protection of registered and unregistered trademarks is around one year at first instance and around two years for an appeal judgment.

The Trademark Act does not require legalisation. Instead, the presentation of legalised documents is left to the applicant’s discretion.