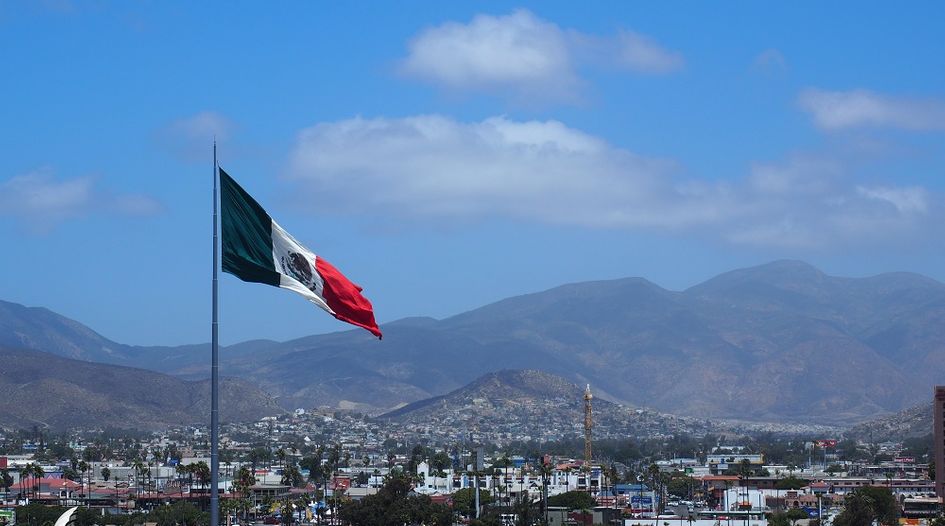 Registration and enforcement of trademark rights in Mexico is regulated by a framework of local laws, regulations, treaties and precedents on specific legal loopholes or procedural matters. Prosecution of applications, protection and maintenance of trademark registrations, as well as dispute procedures, are administered in accordance with the Mexican Federal Law for the Protection of Industrial Property (the IP Law), which entered into effect on 5 November 2020.

Mexico is a party to several treaties, which either directly regulate trademark matters or have been replicated in domestic laws:

Mexican law and practice usually favour registered rights in terms of protection. However, certain provisions in the IP Law have created a hybrid system where rights over unregistered marks may arise.

When a party has applied for a trademark owned or previously used by another party, the rightful owner or senior user of an unregistered trademark may file an opposition, claiming bad faith and providing sufficient evidence regarding fame, rightful ownership or prior use of the trademark in Mexico or abroad. If successful, the opposition procedure could result in a provisional refusal.

Unregistered rights through use

In terms of use as a means of establishing unregistered rights, the IP Law indicates that the party claiming to have used the trademark in the past must demonstrate use prior to the application date or the declared date of first use. According to the IP Law’s description of ‘trademark use’, the rightful owner or prior user of a trademark should demonstrate on the basis of satisfactory evidence that the goods covered by the trademark are made available in the amount or way that corresponds to the practice and customs in the market.

A party that has used a trademark in good faith prior to the filing rights over a registration, and is able to demonstrate it, will not be subject to the prohibitions inherent to the protection of a registration by a third party. This is an exception to an infringement action, which will not be successful against said good-faith user.

Any individual or company – national or foreign – may use trademarks on goods or services. There is no prohibition or limitation as to who may apply for or own a mark.

There is no need for notarisation or legalisation of a power of attorney used for trademark prosecution. In any case, an original power of attorney may be entered into a registry managed by the Mexican Institute of Industrial Property (IMPI) and a copy of the resulting certificate could be used instead.

According to the IP Law, trademarks no longer need to be visible and may be registered if perceptible by any sense while capable of being represented in such a manner that the subject matter of protection is well defined. Accordingly, non-traditional marks (eg, sounds and scents) are now registrable, provided that they function as source identifiers. Likewise, descriptive or common use terms as well as three-dimensional common forms, isolated letters, digits and colours, and non-distinctive trade dress, are suitable for registration if secondary meaning is demonstrated.

The IP Law prohibits the registration of trademarks that go against public order or customs. However, the law provides no definition in this regard and it is therefore up to each appointed examiner to keep this in mind.

The IP Law sets forth specific hypotheses as prohibitions for registration. Some of the most common are:

The IP Law does not foresee multi-class applications. It is not necessary to file a priority document at any time during prosecution.

An application is usually scheduled for examination three to six months after filing. Formal examination is conducted to determine whether an application meets formal requirements, including proper specification of goods or services. IMPI then conducts substance examination based on likelihood of confusion and inherent registrability. If there are no grounds for refusal, registration will be granted. A hassle-free, unopposed and fully compliant trademark application will take from four to six months to be granted registration. Electronic filings are encouraged to reduce the time of prosecution.

Any obstacle for registration will be raised and notified through an official communication. The applicant has a two-month period to respond, which can be extended for two additional months. Failure to respond to an office action will result in abandonment.

IMPI official actions and related writs are available through its online database. Once an application is granted registration, it will be published in the Official Gazette, which is accessible online.

The examiner’s decision to reject an application can be challenged before the hierarchical superior of the issuing branch of IMPI within 15 business days, or before the Specialised Chamber in IP Matters of the Federal Court of Administrative Justice (SEPI) within 30 business days, from the date of notice.

An application will be published for opposition purposes in the Official Gazette within 10 business days following its filing. Any interested party may file an opposition within one month.

The opponent may rely on any grounds provided by law for the rejection of an application. A trademark may be opposed and effectively refused if proven to be confusingly similar to a prior registration or application, or if it is descriptive.

Unlike other jurisdictions, use is irrelevant in an opposition. However, if IMPI issues an office action citing the registration serving as basis in the opposition, the applicant will be entitled to seek a non-use cancellation. A separate legal action will be initiated for such purpose.

If an opposition is filed, this procedure will be notified along with by the examination office action. The applicant has a two-month period to respond the opposition and any other objection made ex officio by IMPI, which can be extended for a further two months. Failure to respond to an office action will result in abandonment.

Evidence in opposition procedures will be submitted alongside each initial writ. The parties will be granted a five-day term to file written arguments.

It takes approximately three to 18 months for the issuance of a final resolution (grant or denial).

Applications that have completed formal and substantive examinations are either denied or granted registration. The granting of registration is published in the Official Gazette.

Under the new IP Law, a trademark is registered for a 10-year term from the date of grant and can be renewed for further 10-year terms. Failure to renew the registration within the six-month period following the renewal date will result in the lapse of the registration. Declarations of use are required on renewal.

Partial cancellations are allowed in Mexico for registrations granted under the IP Law.

The IP Law provides the following grounds for a cancellation action:

The IP Law establishes the possibility to request the partial cancellation of a trademark or slogan, with retroactive effects reverting to its issuance.

Further, there are several grounds for the cancellation or lapse of a trademark registration:

It is now permissible to request the partial cancellation of a trademark for lack of use in respect to the products that are not used. The effects of the cancellation will arise from the moment that a final decision is issued.

It takes approximately two to four months to record renewals, licences, assignments and changes of name. It takes two to three years to obtain a ruling on a cancellation action at IMPI; one year at the SEPI; and six months to one year for constitutional appeals before the Circuit Courts of Appeals.

Searches by owner or attorney-of-records are also available. There are no official fees associated with these searches and they are freely accessible through IMPI’s online database.

It is not possible to conduct a specific search for non-traditional mark, although a list is available.

Complexity in enforcement depends on the circumstances of each case. Some circumstances that might affect the complexity of enforcing trademark rights in Mexico include the amount of infringing goods and their location (eg, at Customs).

Causes for an infringement action include:

The legal hypotheses for infringement also include unfair competition acts linked to IP rights and may be claimed alongside other hypotheses.

Interim relief is available to trademark owners, who may request that:

The remedies that a plaintiff may achieve through an infringing action include:

These remedies may be achieved, ordered and executed through IMPI.

The IP Law expressly states that said damages must be at least equal to 40% of the legitimate value of the infringing goods or services.

An infringement action can take from two to three years before IMPI issues a ruling. The losing party may fight said ruling through a motion of review before the hierarchical superior of the issuing branch of IMPI or an administrative dispute before the SEPI, which can take six to 18 months to reach a decision. This decision may be appealed through a constitutional action before an appointed circuit court of appeals, which can take up to one year for a decision.

The recordal of assignments, changes of name and licences with the IMPI is not compulsory. They are valid and binding among the parties even without recordal. Nevertheless, according to the IP Law, these agreements will be enforceable against third parties only if they are duly recorded with IMPI. The IP Law does not request a recorded licensee for the purpose of demonstrating the use of the mark by the owner.

Also, there are judicial precedents stating that use from an unrecorded licensee may benefit the owner if the latter proves to have control over such use. Nevertheless, it is highly recommended to record licence agreements with IMPI to avoid the objection of evidence by the plaintiff.

There are certain areas of overlap between trademark rights and other IP rights. While the IP Law and the Copyright Law do not specifically refer to cumulative protection of trademarks and copyrights, a logo, device or a combined trademark can be protected under copyright law provided that it has artistic value and meets the threshold of artistic creativity and originality.

Also, a novelty two- or three-dimensional trademark design that depicts shapes, lines or colours, or includes patterns, is suitable to be protected by an industrial design, either for aesthetic or manufacturing purposes.

The IP Law establishes the possibility to protect trademark owners from unauthorised use of their marks in domain names, but it is unclear whether this can be extended to websites, hyperlinks, online ads or metatags.

Private, platform-specific or alternative dispute resolution procedures are available for trademark owners. Mexican law allows for any of these procedures to be effective among individuals and legal entities, if no legal provision is transgressed. Takedown procedures are usually considered and provided by online platforms working for and with Mexican internet users, usually requiring the trademark owner to demonstrate ownership of the related trademark rights.

Concerning domain names, while the ‘.mx’ registry, NIC-Mexico, provides a private dispute resolution procedure to trademark owners and internet users, domain name disputes are usually and effectively submitted to the WIPO Arbitration and Mediation Centre and ruled on by panellists in accordance with the ‘.mx’ Domain Name Dispute Resolution Policy and Rules.

Infringement actions before IMPI may also be used by proxy against infringing actions that make use of internet resources. Interim relief has been used to block domain name registrations and specific content on third-party platforms and websites, with varying results.