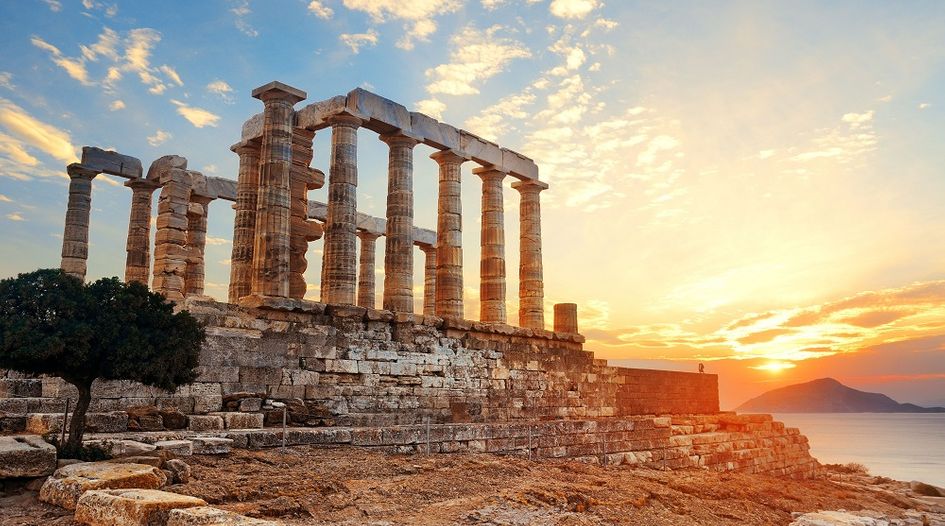 The most important pieces of legislation governing trademarks in Greece are:

Unregistered signs are protected under Articles 13 to 15 of the Unfair Competition Law and may constitute relative grounds for refusal. In particular, protection is offered to signs that are deemed to have become a distinctive feature of the goods or services that they cover.

To obtain protection, an unregistered sign must have distinctive character and must have been used in commerce. No specific statutory conditions outline the extent and type of use that will satisfy these criteria; hence, courts rule on a case-by-case basis. The guiding principle is that use should be systematic, continuous and substantial.

The trademark application must be signed by the applicant or its authorised attorney, whose appointment is optional. If a lawyer is appointed, a signed power of attorney is required, which remains valid for five years.

For a sign to constitute a trademark, apart from being able to distinguish the goods or services of one undertaking from those of another, it must be represented in a manner that enables the competent authorities and the public to determine the clear and precise subject matter of the protection offered to its owner.

Greek trademark law provides for two types of grounds for refusal or invalidation, as outlined below.

The following signs cannot be protected as trademarks:

A sign may not be adopted as a trademark if it is:

In the context of the above, ‘earlier trademarks’ include:

A trademark application can also be opposed on relative grounds if it:

Further grounds for refusal or invalidation are provided in case of unauthorised trademark filing by an agent or representative, and of geographical indications and designations of origin under specified circumstances.

According to the aforementioned law, the OBI is responsible for the awarding of national trademarks, the maintenance of the register of trademarks and the exercise of all responsibilities related to trademarks, in general.

The transfer of all responsibilities regarding trademarks to the OBI aims at creating a unified national policy for all industrial property rights, in harmonisation with the practice of other countries. A joint Ministerial Decision of the Ministry of Development and Investments as well as of the Ministry of Finance is expected to regulate all the necessary organisational, technical and practical details of the transfer.

Trademark applications are checked in terms of completeness, representation, specification of goods or services and other formalities by the trademark auditors. Specially designated employees (researchers) identify prior rights, the owners of which will receive notification of the publication of the later mark for the purpose of filing an opposition before the Administrative Trademark Committee.

The examiner only checks applications with respect to absolute grounds. If there are no such grounds for refusal, the application is published on the OBI’s website for opposition purposes. If grounds for refusal exist, the applicant is notified and may revoke the application, limit the trademark to the extent that it becomes acceptable or submit its observations within 30 days as of the next day of notification. If the applicant fails to reply or comply within the set term, the application will be rejected. The examiner’s decision to reject an application can be challenged before the Administrative Trademark Committee and the committee’s decision is subject to further recourse before the first instance administrative court.

Third parties may oppose the registration of a trademark on both absolute and relative grounds. The term for filing an opposition is three months as of the next day of the publication of the decision on the OBI’s website. If no opposition is filed, the trademark is registered.

Proof of use is provided as a defence during opposition proceedings. If the trademark on which the opposition is based has been registered for more than five years as at the filing date of the opposed application, the applicant can request that the opponent submit evidence of genuine use of the mark in respect of the relevant goods or services on which the opposition is based in the five years preceding the filing date of the application, or prove that there are proper reasons for non-use. Failure to meet these requirements will result in the rejection of the opposition for procedural reasons.

A trademark is registered when it is accepted by a decision of the examiner or the Trademark Committee (provided that no further legal remedies are sought) or by a final decision of the administrative courts. A registered mark is granted protection for 10 years as of the filing date and is indefinitely renewable every 10 years. If renewal is not effectuated within the specified period, the trademark may still be renewed up to six months later after payment of a fine.

Third parties’ rights acquired during this six-month grace period, however, cannot be overturned.

The owner may surrender the trademark at any time for all or part of the goods or services for which it is registered. The surrender must be declared in writing, otherwise it does not have effect. If the mark is subject to a (registered) licence, its surrender will be entered in the register only if the owner proves that the licensee has been duly informed of the intention to surrender the mark.

A trademark can be revoked, either in whole or in part, if:

It is worth nothing that it is the trademark owner that bears the onus of proving genuine use of the challenged mark. Evidence of use must be provided for all goods and services covered by the mark in question and the registration will only be considered valid with respect to those goods or services for which use has been shown. The commencement or resumption of use within a period of three months preceding the filing of the claim for revocation shall be disregarded where preparations for the commencement or resumption occurred only after the proprietor became aware of the fact that the claim may be filed.

A trademark may be declared invalid if it should not have been registered in the first place because it was registered in breach of the provisions regarding absolute or relative grounds for refusal. The proof of use requirement also applies in invalidity proceedings.

Decisions ordering the revocation of a mark or a declaration of invalidity take effect as soon as they become final.

A registered trademark confers exclusive rights on its owner, who is entitled to prevent all third parties from using in transactions without its consent any sign that:

The Trademark Protection Law introduced the right of the trademark owner to prohibit preparatory acts of infringement with respect to packaging or other means and sets out the parameters for the protection of trademark owners in transit cases, harmonising the treatment of national trademarks with that of EU trademarks.

In cases of trademark infringement, action may be pursued before the civil courts.

In the context of a main infringement action, the rights holder may request:

Remedies under the first three points above are also available against intermediaries.

The issuance of a first instance decision in main civil proceedings takes on average between 15 and 18 months.

A petition for an injunction requires that the situation be urgent and, consequently, it is recommended that rights holders act immediately on learning of the infringement. Preliminary measures may be also requested against intermediaries, while ex parte proceedings are also a possibility provided by law under exceptional, specified circumstances.

Temporary restraining orders may be requested only if a petition for injunction has also been filed simultaneously and are available only in cases of extreme urgency. As a rule, the judge invites the respondents to attend the hearing, although proceedings may also take place ex parte.

In infringement proceedings, the respondent may claim non-use as a defence, requesting that the plaintiff or owner of the trademark should prove that, during the five-year period preceding the date of bringing the action, the trademark had been put to genuine use in connection with the goods or services in respect of which it is registered or that there are proper reasons for non-use, provided of course that the trademark was not registered for less than five years as of the date of bringing the action.

The respondent may also raise said defence in preliminary injunctions.

In the calculation of damages, the negative economic consequences suffered by the rights holder, including loss of profits as well as profits made by the infringer, are taken into account. Damages may also be calculated on the basis of hypothetical royalties.

Damages and moral damages may be claimed only in cases of wilful misconduct or gross negligence, a provision that may favour infringers and is inconsistent with the degrees of negligence required for copyright and patent infringement.

The EU Customs Regulation 608/2013 is directly applicable in Greece and, as no national border law exists, the regulation sets out the domestic customs intervention procedure.

Criminal penalties are provided for various acts of trademark infringement, although criminal prosecution does not take place ex officio but following the filing of a related criminal complaint by the rights holder. Professional and commercial-scale infringement are considered as aggravating circumstances.

Law 4640/2019 has put in place a compulsory initial mediation session before the hearing of a case in a legal dispute arising, among other things, from trademark infringement. That session, along with proof of the lawyer’s compliance with the obligation to inform the client in writing about the option of mediation, have become a prerequisite for the admissibility of a main infringement action. Voluntary mediation is also an option in Trademark Committee proceedings.

Ownership changes (eg, assignments and mergers) and various other changes (eg, changes of name, address and legal style of the rights holder) must be recorded in the trademark register in order to be enforceable against third parties.

Likewise, licence agreements must also be properly recorded in the register for the licensee to claim and enforce its rights against third parties and for the licensee’s use of the mark to benefit the trademark owner.

The signatures of the parties on both assignment deeds, merger contracts and licence agreements must be notarised and legalised with apostille. Evidence regarding the right of the signatories to represent the contracting parties is also required.

There are clear areas of overlap between trademarks and other IP rights, as trademark protection may also be complemented by other related IP rights, provided that the protection criteria of such rights are met.

Shapes of products or their packaging, trade dress, logos and business names, as well as other unregistered rights, may under certain circumstances enjoy similar protection to that afforded to trademarks under the Unfair Competition Law. If certain conditions are met, these may all be regarded as non-registered marks and enjoy related rights of priority and protection.

The regulation of telecoms in Greece is vested in the Hellenic Telecommunications and Post Commission. The main legal framework can be found in the Regulation on the Management and Assignment of Domain Names, which was most recently amended in March 2018. The regulation sets out the procedures for registering domain names in the country code top-level domain ‘.gr’ or ‘.ελ’ and the grounds for cancellation petitions, which may also include a request for the transfer of the contested domain name to the petitioner. Commission decisions can be appealed to the Athens Administrative Court of Appeal within 30 days of their official notification to the parties.