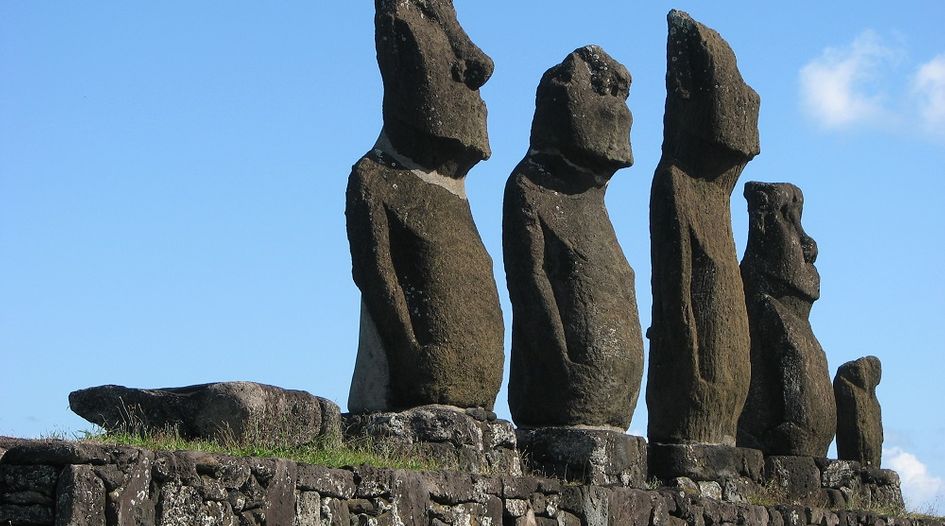 Trademarks are governed in Chile by Law No. 19,039 (the Industrial Property Law), which has been in force since 30 September 1991. This law has been partially modified four times, with the last substantial amendments being introduced by Law No. 21,355, which entered into force on 9 May 2022.

In our opinion, the most substantial amendments as far as trademarks are concerned are:

In addition, on 4 April 2022, Chile officially became a member of the Madrid Protocol.

Chile is a member of the Paris Convention for the Protection of Industrial Property, the World Trade Organisation’s Agreement on Trade-Related Aspects of Intellectual Property Rights (the TRIPS Agreement), the Trademarks Law Treaty and the Hague Convention Abolishing the Requirement of Legalisation for Foreign Public Documents (the Apostille Treaty). Free trade agreements containing IP chapters also apply, in particular those signed by Chile with the United States and the European Union.

Chile has approved the Madrid Protocol for International Registration of Trademarks, which has been in force since 4 July 2022. In addition, on 30 June 2022, Exempt Resolution No. 184 of the Ministry of Economics was published in the National Gazette, which contains instructions for the processing of international trademarks according to the Madrid System, also in force from 4 July 2022.

The latter claim must be supported by evidence of fame or notoriety among the relevant consumer public in Chile.

Any person or legal entity, whether domestic or foreign, may apply for and own a registered trademark.

For power of attorney and other documents to be filed with other authorities or Chilean courts, the relevant Hague Convention eliminates the requirement to legalise public documents that originated abroad, replacing it with just one step of certification in the form of the Apostille Treaty, which is already in full force in Chile.

Any sign capable of distinguishing products and services can be protected. Such signs can consist, among other things, of words, letters, numbers, drawings, colour combinations, olfactive marks and three-dimensional images. Phrases related to publicity or advertising may also be registered, provided that they are associated with a registered trademark. Sound trademarks are allowed if they are represented graphically and are accompanied by the filing of a sound recording. Trademarks that consist of letters or numbers must be represented by a characteristic drawing that gives distinctiveness to the letter or number. Geographical indications and appellations of origin, as well as certification and collective trademarks, are also protectable.

The following may not be registered as trademarks:

Each application is subjected to an examination to determine whether it meets the formal requirements, including whether the application specifies the goods or services of the Nice Classification for which registration is sought. INAPI notifies the applicant of any changes required. The applicant has 30 working days to file the necessary corrections. Failure to do so means that the application will be deemed abandoned. Where there are no formal objections or where these objections have been corrected in a timely manner, the application is accepted for further pursuit and published in the Official Gazette within 20 working days for opposition purposes.

Applications that have passed the formal and substantive examinations and are unopposed, or that have overcome any objections or oppositions by a final decision, are accepted for registration. Mark owners have 60 working days from that date to complete the payment of the registration fees. The registration shall be for an initial period of 10 years, renewable indefinitely for consecutive periods of 10 years.

Any party can voluntarily withdraw a registration. When made through a representative, special powers are required.

Registration granted to signs deemed unprotectable by the Industrial Property Law may be cancelled on the basis that prohibitions for granting registration were ignored. Such actions must be filed within five years counted from the registration date.

Revocation on the basis of non-use was incorporated in Chile by Law No. 21,355, which modified the Industrial Property Law when it came into force on 9 May 2022. This modification established a cancellation action for non-use.

For trademarks with registration granted before 9 May 2022, the five-year term begins after the first renewal that occurs after 9 May 2022. The modification that brought these rules into force also established a cancellation action for when a trademark has become generic.

From the time of filing, it takes, normally:

These terms are still presently and temporarily uncertain as a consequence of the covid-19 pandemic.

Searches for identical trademarks (registered or applied for) are available online and free of charge at www.inapi.cl. Free searches for previously requested trademarks or registered identical trademarks that coincide in their first part to, or contain, the trademark searched for are also available online for all classes. Searches cover trade names and slogans, but only verbal descriptions of graphic marks. The databases cover the past 30 years.

The enforcement of a trademark, by means of the Industrial Property Law, requires that the trademark be registered in Chile.

Border measures are regulated by the TRIPS Agreement, internalised by Law No. 19,911 in 2003, and must be followed by actions in the relevant courts. When properly supported, border measures are usually effective.

Criminal actions are available before the ordinary criminal court with jurisdiction over the area where the offence was committed. These actions are open mainly when an unauthorised third party is using in bad faith a trademark that is identical or similar to another that is already registered for products or services that are identical or related to those protected. To be in a position to initiate criminal actions, it is necessary that the registered trademark bears in a visible form the words Marca Registrada (Registered Trademark), the initials MR or the symbol ®. The penalties consist of a fine and the confiscation of the products bearing the forged trademark. The court shall decide how to dispose of the tools and materials used to commit the infringement by ordering either their destruction or their distribution to charitable institutions. Finally, Law No. 21,355 incorporates new criminal sanctions in the Industrial Property Law for those who counterfeit a trademark, which include imprisonment.

Civil actions are prosecuted before the ordinary court that has jurisdiction over the defendant’s address. Such actions are available against any kind of violation of a registered trademark. The object of civil actions is to put an end to the infringement, to obtain indemnification for damages and to adopt the necessary measures to prevent the infringement from continuing. Compensation for damages may be determined taking into account one of the following options in accordance with the trademark owner’s choice:

If the mark owner so desires, compensation for damages may be calculated according to the general rules of the Civil Code, which are much more complex. Preliminary and precautionary measures are contemplated in the case of civil actions. In addition, in counterfeiting cases, the owner of the trademark that has been subject to counterfeiting may request that a compensation for damages caused could be substituted by a single fine that cannot exceed 2,000 monthly tax units per infringement. Such an option may be exercised in a claim for indemnity from damages.

Civil infringement actions to protect unregistered trademarks may be available under the Unfair Competition Law No. 20,169, but not under the Industrial Property Law.

The competent criminal court may order the seizure of products bearing the infringing sign and of the elements directly used to imitate the registered trademark immediately after filing the complaint. The time to obtain this relief will depend on the court’s criteria and on the quality of the evidence filed by the complainant.

According to the new Procedural Criminal Code, final decisions in criminal cases should take no longer than one year and a maximum of two. It is also possible to obtain an earlier settlement of the case by using the alternative reparatory agreements accepted by the court. Civil actions take approximately two years at first instance and a further two years at second instance. Terms are temporarily uncertain as a result of the covid-19 pandemic. While a decision is pending, it is possible to take preliminary or precautionary measures based on the merits of the case and the quality of the evidence rendered.

Criminal actions are much more common than civil ones. The Chilean courts are becoming more familiar with trademark cases, so the quality of the decisions is improving.

While the law does not refer specifically to the cumulative protection of trademarks and copyright, a graphical or combination trademark can be protected under copyright law provided that it has artistic value.

The Network Information Centre (NIC) Chile, the manager of the ‘cl.’ domain, follows an alternative dispute resolution policy in relation to ‘.cl’ domain names that is similar to the ICANN UDRP. Under NIC Chile’s rules and policy, trademark owners may claim for:

The regular Industrial Property Law provisions are applicable to online infringement: “Those who maliciously use, for commercial purposes, a trademark identical or similar to another registered for the same goods or services in respect of goods or services related to those protected by the registered trademark.” To proceed with an action regarding online infringement, it is necessary to have a trademark recorded in Chile.

According to NIC Chile’s rules, for any person who wants to take a ‘.cl’ domain name, provisions are available to ensure that its registration does not contravene the rules regarding the exercise of freedom of expression and information, the principles of fair competition and business ethics.

NIC Chile has no public dispute resolution policy for the ‘.cl’ ccTLD.