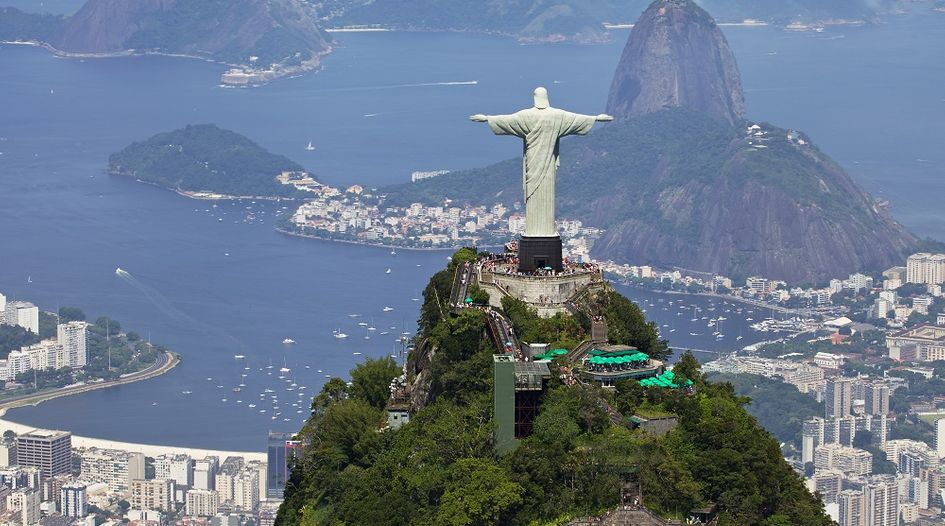 The law also establishes that signs that imitate or reproduce a third-party mark are not registrable as trademarks if the sign is intended to distinguish a product or service that is identical or similar to that covered by the existing mark and is likely to cause confusion or association with such mark. As a consequence, the law enables the owner of a mark that has not yet been filed or registered in Brazil to challenge third parties that attempt to register similar or identical trademarks. Similar to the aforementioned situation, the rights holder has 60 days in which to file an application for registration of its mark in Brazil, starting from the filing date of the opposition or administrative nullity action.

The amount of use necessary to establish unregistered rights is highly contingent on the circumstances of fact, the statute that is being raised and the market segment at issue.

The Industrial Property Law states that a natural or legal person subject to either a public or private law regime may register a mark. Business entities that are subject to private law regimes may apply to register a mark covering only activities that they effectively and lawfully carry out either directly or through companies that they control either directly or indirectly. Similarly, natural persons may apply to register only marks that cover their professional activities.

If an applicant fails to respond to an office requirement, the application will be shelved. However, if a response is filed, the examination will continue, even if the requirement has not been satisfied or if the applicant’s response was to lodge a formal challenge to the office action or request.

As for purely administrative proceedings (eg renewals, mergers and changes of name), a decision is expected within three to four months.

The Industrial Property Law sets out two administrative mechanisms for a rights holder to enforce its rights: opposition and administrative nullity actions.

For civil proceedings, the injured party may file a lawsuit seeking the cessation of the infringing act, coupled with a claim for damages. The lawsuit may also include an ex parte preliminary injunction request, with a view to the immediate cessation of the harmful conduct until a decision on the merits can be rendered, subject to the specific requirements of the Civil Procedure Code. To obtain a preliminary injunction, the plaintiff must demonstrate a prima facie good case (ie, that there is a likelihood of success on the merits of the case) and that delay in granting the relief sought would be likely to give rise to harm that is irreparable or extremely difficult to redress.

A criminal action requires the filing of a criminal complaint. However, if the crime is committed against armorial bearings, crests or official public distinctions, a criminal action will be commenced by the Public Prosecution Service.

In a lawsuit seeking cessation of the infringing act and a damages award, the judge may grant an ex parte preliminary injunction to avoid irreparable loss or harm that would be difficult to repair. In such circumstances, the court may require a petitioner to post a bond or a fiduciary guarantee and may order the seizure of all merchandise, products, packaging, labels and other materials that bear the counterfeit or imitated mark.

Since 2003, the Superior Court of Justice has held that proof of the infringement of a trademark right is sufficient in itself to give rise to a right to damages, independent of any evidence of actual harm caused to the injured party.

As for a registration filed in bad faith, a nullity action can be filed at any time, according to Article 6bis(3) of the Paris Convention.

Once a civil trademark infringement action has been filed, the defendant is notified to respond within 15 days. The plaintiff may respond to the defendant’s answer within 10 days.

There are usually two hearings at first instance:

This second hearing occurs only in cases where there is a need for evidence to be produced.

At the close of the hearing, the judge may immediately make a final order (the final decision at first instance), or they may direct that the parties submit final briefs. In the latter case, the judge will issue the final order following the submission of the briefs and their consideration.

If the document is signed by the company’s president, vice president, chief executive officer, chief financial officer, chief operating officer, or a director or secretary, notarisation is not needed. If, however, the signing officer has a different title, it is recommended to have the document notarised to avoid doubts about their powers to represent the company. This document must also include the signature and details of the identity of two witnesses (no notarisation is required for the witnesses’ signatures).

Registration of the licence contract with the BPTO is not required to constitute proof of use of the licensed mark.

Since October 2010, Brazil has had an administrative conflict management system, SACI-Adm, for domain names using the country-code top-level domain ‘.br’.

According to the SACI-Adm Regulations, a rights holder may oppose a domain name on the grounds that there is a previously filed or registered trademark before the BPTO, or that the opposing party owns a trademark that, although not filed or registered with the BPTO, is considered to be well known in its field of activity within the terms of the Industrial Property Law. The decision rendered in the SACI-Adm procedure will determine either cancellation of the domain name or its transfer to the rights holder.

The Brazilian courts have not yet specifically addressed the question of whether the use of a third party’s trademark in keyword advertising constitutes trademark infringement. However, the judiciary has already issued rulings indicating that such use may constitute an act of unfair competition when it is likely to confuse or redirect consumers. In such a case, rights holders can invoke the regulations for protection against unfair competition.