Protecting a company name or trademark is an essential aspect of any business or organisation around the globe. It is becoming increasingly important to comprehend and incorporate international aspects of intellectual property, such as when a company should expand its IP protection and to which jurisdictions, and how this will differ from the IP protection that it has in its home country.

As a recommendation for all future investors in Latin America, it is advisable to file the most important trademarks as soon as possible. All Latin American countries have a first-to-file system, so early filing is essential in order to keep pirates and free riders as far out of the picture as possible.

Due to the fact that the first-to-file system enables the registration of a mark without any prior use, failure to register a mark at an early stage can be damaging as a third party may then be able to register it before the rightful owner. This would force the rightful owner to engage in contentious and litigation procedures in order reclaim the mark.

Similar to other jurisdictions around the world, litigation and contentious procedures in Latin America are costly and time consuming. The average period for obtaining a trademark registration can differ depending on the country, but is generally between six months and four years. The Chilean and Peruvian trademark offices in particular are known for their efficiency in the registration process.

To ensure the harmonised implementation of supranational legislation, the Andean Court of Justice is entrusted with the interpretation of all Andean commission decisions (including Decision 486) and other Andean legislation. This ensures a consistent application of trademark law at a regional level and generates consistent practice across the national authorities of the custom union members.

Decision 486 of the commission establishes the community’s supranational approach to industrial property. Although the community members have a similar IP standard, the ‘Andean Mark’ has yet to be implemented as a legal tool – unlike the EU trademark applied for directly through the EU Intellectual Property Office, which grants exclusive rights in all EU member states.

Therefore, if trademark protection is required in the Andean Community, it is necessary to file a trademark application and obtain registration in each Andean country independently.

Nevertheless, if a holder has a registered trademark or a previously requested trademark application in any of the community member countries, it automatically enjoys priority to submit oppositions in other member states in order to prevent similar marks from being granted.

Mercosur, or the ‘Market of the South’, is a South American trade bloc established in 1991, comprising four full members: Argentina, Brazil, Uruguay and Paraguay.

In 1995 the Mercosur member countries adopted a protocol that sought to harmonise norms relating to trademarks and geographical indications. In 1998 the second protocol was concluded, which covers norms regarding industrial designs.

However, the protocols have not been unanimously ratified by the member states – which is a pre-established requirement in the Mercosur treaty – and are therefore unable to enter into force. Consequently, as within the Andean Community, it is currently not possible to apply for a regional trademark.

Even though Mercosur has achieved a certain level of IP harmonisation, each country has its own requirements when dealing with trademark protection, thus a country-by-country approach is required until all Mercosur members ratify the pending protocols.

The Madrid Protocol applies in only three Latin American countries – Colombia, Cuba and Mexico – since they became members of the protocol in 2013. Since 2016, Brazil has been willing to join and ratify the treaty, but it must make important adjustments to its own internal industrial property legislation. Moreover, Brazil’s Trademark Office has a serious trademark registration backlog, which means that it takes up to 30 months for a substantive examination to be completed, provided there is no opposition. This makes Brazil one of the slowest countries in Latin America for trademark registration and means that it is falling behind neighbouring countries. The Madrid Protocol requires a maximum term of 18 months for a trademark office to conclude the examination of an application and to provide a decision regarding registration.

It is possible that Chile will ratify the Madrid Protocol in the next two to three years.

Trademark law and practices differ from country to country. Argentina, Peru, Brazil and Paraguay are single-class systems, in which the interested party should file a trademark application for each class that it intends to protect. Chile and Colombia allow multiclass registration.

Renegotiations of international free trade agreements with Mexico’s trade partners and the need for modern IP legislation to meet national market demands are being introduced in important reforms to the Industrial Property Law. On 18 May 2018 these reforms were published in the Official Gazette and will enter into force in August 2018.

First, the reform introduces non-traditional forms of trademark protection (eg, sound marks, olfactory marks and holographic marks). Another important aspect is the introduction of the trade dress concept, which enables efficient protection of the set of operational and visual elements that distinguish products or services in the market. Further, Mexico recognises the figure of secondary meaning obtained by the use of a mark within the market, alongside the recognition of the notoriety acquired by an unregistered trademark.

The reform also formally introduced coexistence agreements or letters of consent, with the purpose of allowing the registration of a trademark in cases where the holder of that mark considers that there is no risk of error or confusion.

The juridical figure of the statement of trademark use is incorporated in the Industrial Property Law and is based on two assumptions:

The filing of a nullity action based on bad faith will not only be restricted to representatives, agents, users or distributors of the right holder. The reforms will allow nullity claims to be launched against the bad-faith registrant that had a direct or indirect relationship with the rightful holder of the mark.

The use requirement is mandatory in all Latin America countries. The general rule requires the registered mark be used constantly for a five-year period. Thus, five years of non-use constitutes grounds for the cancellation of the trademark, which can be required by a interested third party or by the country’s own trademark office ex officio. Each country has its own regulation and standard regarding the use requirement.

The only exception to this rule is Chile, where national IP legislation does not require use of the trademark in the market. The bill that was supposed to modify and introduce this requirement into Chilean national trademark legislation has been stuck in Congress since 2013. Some argue that in order to introduce the non-use requirement as an obligation, constitutional reform is needed.

The defence of trademark rights can be exercised in Brazil by the rights holder by means of an extrajudicial or a judicial process.

First, as in many jurisdictions, it is highly recommended that the rights holder acknowledge the existence of the infringement and send a cease and desist letter to the infringer, requiring an immediate end to the illegal conduct.

In the event that the infringer does not cease the infringing conduct, the filing of a civil judicial action is recommended in order to enforce the mark owner’s right and to force the infringer to cease the illegal use of the registered mark before the Brazilian judicial system. Jointly, compensation for damages can be requested.

In addition, violation of trademark rights can be enforced before the criminal courts. As a result, infringement is considered a criminal offence according to the Industrial Property Law.

Trademark enforcement in Mexico can be carried out through administrative, civil and criminal actions. The administrative route is carried out before the Mexican Institute of Industrial Property and is based on the actions of precautionary measures, administrative infringements, invalidation and cancellation for non-use.

In relation to the procedure of suspension of free movement of goods of foreign origin, this will be carried out in joint actions with the Mexico Industrial Property Office, the attorney general and Prosecution Department of Mexico and the General Customs Office, to prevent the entry of counterfeit products or products with marks so similar as to create a degree of confusion. It is recommended that the registered trademarks be registered with the customs office.

Any action regarding compensation for damages will be conducted before civil courts once the finality of the administrative action has been declared.

Finally, in order to prosecute the commission of any crime provided for in the Industrial Property Law, the claimant must submit the complaint before the attorney general, specifically before the unit specialised in the investigation of industrial property crimes.

Administrative actions are brought before the Peruvian Industrial Property Institution.

In Peru, infringement actions are the most effective means of enforcing trademark rights. Their main objectives are:

Compensation for damages can be brought only before a civil court.

Thus, the rights holder which has detected the infringement can bring an infringement action before the Peruvian Industrial Property Institution in order for the unauthorised third party to stop using their brand. Likewise, depending on the case, the holder can request for precautionary measures and inspection requests jointly with the action in order for the authority to verify the likelihood of the infringement in the Peruvian market.

Finally, the institution’s decision, if the existence of the infringement is determined, will be a fine and the cessation of use of the mark. 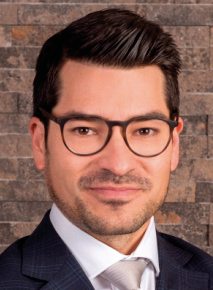 Daniel de Santiago Villagrán is an attorney at law in Dellafiori, specialised in intellectual property, copyright law and corporate law. He joined as senior associate in the department of international trademarks and patents department in 2017. He also deals with issues relating to IP prosecution, litigation, technology transfer, corporate IP and contract law. He graduated with an LLB from Gabriela Mistral University, Chile and an LLM from the University of Helsinki, Finland.