Designs – protecting fashion in the United States with IP rights

Fashion brands want to build their businesses without having others free ride off their designs – IP protection can play a vital role in making that happen. However, IP protection for fashion designs can be a challenge under current US IP law. For example, unlike jurisdictions such as the European Union, the United States has no official system of unregistered design rights. Nonetheless, fashion designs can receive some protection through design patents, trademarks and copyrights.

Design patents protect the overall ornamental appearance of a design, which must be applied to an article of manufacture. Design patent protection prevents third parties from using, making or selling products that closely resemble a patented product. Design patents protect a wide range of fashion designs from trainers and shoes, to dresses and trousers. However, one limitation of design patents is the time that it takes to obtain enforceable rights. Fashion trends often have shorter timelines than the time taken to prosecute a design patent application through to issuance (it currently takes on average 20.5 months from filing to issuance). Pendency can be significantly reduced by filing for expedited examination under 37 CFR, Section 1.155. Through this ‘rocket docket’ provision, pendency for a design patent application at the USPTO can be reduced by half or more; indeed, the average time from grant of an expedited request to first office action is currently only 1.3 months. In addition, comprehensive design patent protection can be expensive. But with a sophisticated design patent claiming strategy employing multiple embodiments, appendices and continuation applications, there are ways to significantly reduce costs. All told, design patent protection is key to an overall protection strategy for fashion.

Trade dress protects an aspect of a product that is acting as a source identifier, and may include features such as size, shape, colour, colour combinations, texture and graphics. To have a valid trade dress, the fashion design must be:

Trade dress protection for fashion designs can be difficult to obtain due to the distinctive and non-functional requirements. For fashion items themselves (eg, clothing or shoes), the items cannot be inherently distinctive and thus must acquire secondary meaning. In addition, the asserted trade dress must be demonstrated to be non-functional. However, with some fortitude and planning, these hurdles can be overcome. One example of successful trade dress protection is Christian Louboutin’s red-bottomed shoes, which the US Court of Appeals for the Second Circuit held to be acting as a source identifier so long as the red bottom of the shoe contrasts with the shoe’s upper, thus not extending trade dress protection to all-red shoes.

Finally, copyright protection is another tool to protect fashion designs. For a designer to have a valid copyright, the work must be original and at least minimally creative. Copyright exists as soon as copyrightable subject matter is fixed in a tangible medium of expression. A key challenge with protecting a fashion design via copyright is that copyright protection does not typically extend to useful articles (eg, clothing). However, there is an exception where there the useful article contains artistic elements that are separable from the useful article. A major issue in recent US copyright law has concerned how to determine what is separable. In the past couple of decades, the US Circuit Courts of Appeals have used nine distinct separability tests. Until the US Supreme Court decided Star Athletica LLC v Varsity Brands Inc in 2017, neither the US Copyright Office nor the Supreme Court had provided much guidance about what the appropriate test should be.

Star Athletica and Varsity Brands are competing manufacturers of cheerleading uniforms. After Star Athletica published a catalogue of cheerleading uniforms with designs similar to Varsity’s copyrighted designs, Varsity sued, alleging infringement of its exclusive rights to reproduce, display and distribute their copyrighted designs. The main issue in the case involved whether Varsity owned a valid copyright in the designs of the cheerleading uniforms; in particular, whether the designs were copyrightable subject matter. Copyright protection does not extend to useful articles unless there is a pictorial, graphic or sculptural (PGS) work that is separable from the underlying useful article. Because cheerleading uniforms, as clothing, “possess both utilitarian and aesthetic value”, they were considered useful articles, and thus copyright protection was only available for a separable PGS work, if any. The US District Court of the Western District of Tennessee held that the designs did not contain a PGS work that was physically or conceptually separable. Thus, the district court found that the designs were not copyrightable and Star Athletica could not infringe any valid copyright (see Figure 1). 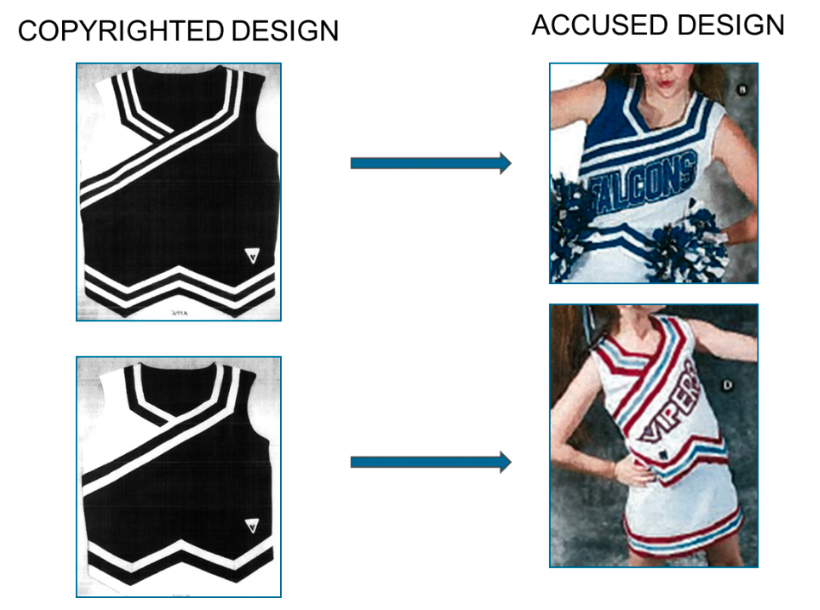 The court added that when determining whether the PGS work can exist independently of the utilitarian aspects of the useful article, courts should use the ‘objectively necessary’ and ‘design process’ approaches seen within other courts. Using its method, the Sixth Circuit held that the uniform designs were in fact copyrightable subject matter. Under the Sixth Circuit’s approach, the cheerleading uniforms’ stripes and chevron designs are PGS works within a useful and utilitarian article, the designs are separately identifiable, and the stripes and chevrons can exist independently of the underlying useful article.

The new test is really just a rephrasing of the statute. The biggest legacy of the decision is that it wiped the slate clean of the many confusing tests that had cropped up over the previous decades. For example, the Supreme Court’s separability test eliminates the troublesome and difficult to determine distinction between conceptual and physical separability. Although the decision clarifies the appropriate test to be used to assess separability, the two dissenting justices, Kennedy and Breyer, proffered concerns about the economic and policy effects of the decisions and noted that the broad interpretation of the decision could cause an uptick in litigation and thus result in increased prices in the clothing industry.

Perhaps most notably, the Copyright Office recently granted two copyright registrations to adidas for fabric designs of its popular Yeezy Boost 350 line of trainers (see Figure 2). The decision to register came on the tail end of two rejections, the first asserting that the trainers were merely useful articles and did not contain any copyrightable authorship. After a request for reconsideration, the Copyright Office conceded that the Yeezy Boosts contained separable designs and met the first prong of the Star Athletica test. However, the office refused to register the copyright on the basis that the design did not meet the second prong of the separability test because the design was merely a combination of “simple shapes arranged into common, expected patterns in very simple color schemes”. In the response to the second request for reconsideration, the Copyright Office accepted the arguments made by adidas and found that the design of the shoes “contain[ed] a sufficient amount of original and create two and three-dimensional authorship for registration”. Highlighting the low standards for copyright protection, the office held that the shape was combined in such a way that there was enough originality and creative authorship to support copyright protection.

Only a week after the Star Athletica opinion, Puma filed suit against Forever 21 claiming copyright infringement of its Creeper shoe, Fur Slide sandal and Bow Slide sandal, all part of Puma’s Fenty brand. Among other things, Puma claimed that its designs met both prongs of the Star Athletica separability test. Forever 21 argued that the three-dimensional waves and contours of the shoes are not copyrightable works because they cannot be separated from the shoe without destroying the “basic shape of the useful article”. Forever 21 additionally argued that the basic shapes of the shoes failed to meet the minimum threshold of originality. Although the case settled prior to an opinion applying the separability test, this case sets the tone for suits to come covering fashion designs and copyrightable material.

Another interesting post-Star Athletica suit involves the copyright eligibility of a banana suit costume. The Hallowe’en costume retailer Rasta Imposta sued its competitor Kangaroo Manufacturing for infringement of its copyrighted banana suit (see Figure 3). Kangaroo, after conceding that its costume was substantially similar to Rasta Imposta’s design, argued that the claim should be dismissed because the copyright is invalid under the separability doctrine. On appeal, the Third Circuit affirmed the lower court, and held that the banana suit contained a separable design that was distinctly original. Specifically, it held that the suit contained sculptural features, which did not contain the “cutout holes… the holes’ dimensions… or the holes’ locations”. However, the copyright did protect the shape, colours, lines and length of the costume altogether. Kangaroo also argued that the design of the costume was unoriginal because it was merely “the design of a natural banana”. The court responded noting that the question was “whether the depiction of the natural object has a minimal level of creativity” and was dependent on the circumstances surrounding the case. The court further reasoned that there are several ways to make a banana costume and that the exact colour, shape and length of Rasta Imposta’s design “would not effectively monopolize the underlying idea”. 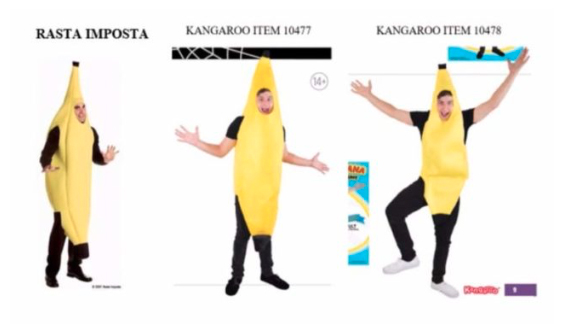 Implications in the courtroom

Because of the Star Athletica decision, there is now a single separability test that, at least on the surface, is less subjective. For example, it eliminates consideration of the subjective intent of the designer. However, there still appears to be space for discrepancies and different judicial interpretations between jurisdictions.

For example, the second prong of the test is open to both narrow and broad interpretations. One must determine whether PGS features could exist on their own or in a different medium from the underlying useful article. One scholar asks, “Does this simply ask whether the design could be drawn separately on a piece of paper?” – if this is the case, almost any design is capable of being drawn separately from the underlying useful article. Under an alternative approach, one determines whether the PGS features, when drawn on a separate piece of paper, necessarily replicate the useful work as a whole.

Further, as the dissent noticed, the new separability test may lead to an increase in copyright litigation. Designers who were unable to sue an infringer due to their designs being ineligible for copyright protection may now have a higher likelihood of success.

It will be interesting to observe how the courts apply Star Athletica’s separability test moving forward.

The Star Athletica decision may have had a positive impact on high-fashion designers against fast-fashion retailers. Major fast-fashion retailers like Forever 21, H&M, ASOS, Topshop and Fashion Nova often churn out replicas of catwalk designs before the originals hit the shops. For example, on Sunday 19 February 2019, Kim Kardashian attended the Hollywood Beauty Awards wearing a vintage designer dress from Thierry Mugler’s Spring 1998 Couture collection. Within hours of Kardashian’s red-carpet appearance, fast-fashion retailer Fashion Nova was advertising its $50 “Winning Beauty Cut Out Gown”, ready for pre-order (see Figure 4). Kardashian tweeted: “It’s devastating to see these fashion companies rip off designs that have taken the blood, sweat and tears of true designers who have put their all into their own original ideas.” Because of Star Athletica, designers may have more opportunities to protect their work via copyright. 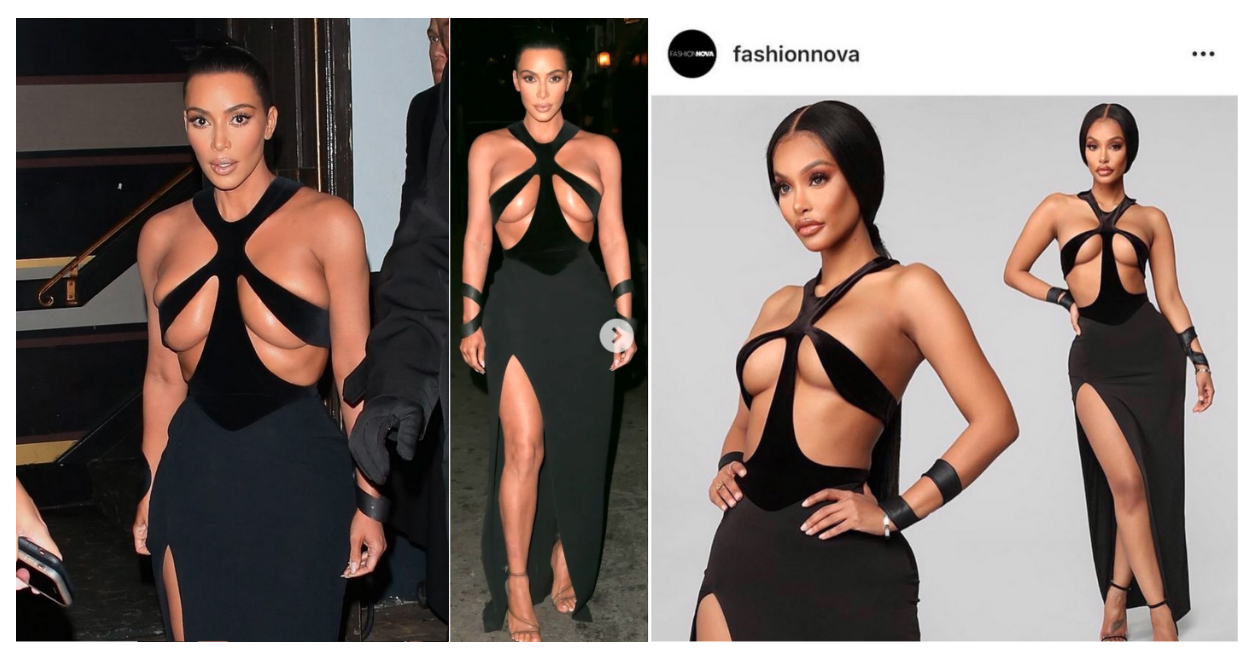 Additionally, Star Athletica should discourage designers from borrowing motifs from their peers or the past. Fashion is typically cyclical. Past fashion trends continuously come back into style. Thus, designers must be careful when borrowing ideas from others due to the relatively low standard on determining separability.