Procedures and strategies for anti-counterfeiting: Chile

According to Chilean customs statistics, the total value of goods detained in 2016 through border measures (in terms of retail price) was $39,693,407. In this context, 4,438,313 units of counterfeit goods were temporarily seized by Customs.

IP rights are recognised in the Constitution. Section 19(25) guarantees the freedom to create and disseminate art, as well as the rights of authors over their intellectual and artistic creations of any type. The industrial ownership of invention patents, trademarks, utility models, technological processes and other analogous creations (for a period prescribed by law) is also guaranteed.

The protection of trademarks is regulated under the Industrial Property Law 1991 (19.039). It states that a duly registered trademark confers on its owner the exclusive right to use it in trade (in the manner that it has been granted) to distinguish products, services or business or industrial establishments covered by the registration. In this sense, the owner of a registered trademark may prevent any third party from using the mark in the market without its consent, or brands for products, services or business or industrial establishments that are identical or similar to those for which the registration has been granted, in the understanding that such third-party use is likely to mislead or create confusion.

Chile has acceded to several free trade agreements, including with the United States in 2003; as such, several so-called ‘TRIPs plus’ rules are included in Chilean law.

Pursuant to the WTO Agreements on Intellectual Property Rights Issues, Chile enacted Law 19912 on October 24 2003. Articles contained in Title II of this law set out border measures for the enforcement of IP rights. The law introduced both ex parte and ex officio enforcement actions.

This is a judicial process that allows rights holders – based on evidence of counterfeit shipments arriving in Chile’s customs houses – to request suspension of customs clearance on the basis of potential IP rights crime.

In order to trigger this procedure, the rights holder must submit a written request before a civil court for the suspension of customs clearance of counterfeit goods. Once the court has issued the clearance suspension order, it will notify the regional customs director or customs administrator, who then officially notifies all customs agencies by email and circular fax, in addition to the assistant oversight department.

Customs clearance is accordingly suspended for 10 working days from the date of notification of the court order to the customs authorities. Where the measure has been notified before delivery of the goods to Customs, the deadline will be in force from the date of delivery.

If the measure is granted and the goods are temporarily retained, the rights holder must file a civil or criminal action within 10 working days of notification of the suspension of clearance to Customs and request the maintenance of the measure.

It is not easy to gather concrete and detailed information regarding potential incoming counterfeit shipments in advance. Nonetheless, if the rights holder can obtain this information, it is advisable to file this action to prevent the goods from entering the country.

Law 19.912 sets out the ex officio border enforcement measure, empowering Customs to temporarily suspend the clearance of products where it is apparent from an examination that such products are infringing.

In such cases, Customs will inform the rights holder – if it can be identified – of the possible violation, so that it may exercise its right to request suspension of clearance and corresponding rights, and file a criminal action requesting maintenance of the measure. Customs can also file a criminal action based on evidence of smuggling.

The suspension of customs clearance is effective for only 10 business days from the date of notification issued by Customs to the rights holder. If a criminal action is not filed, Customs will release the products.

According to official statistics, in 2016 Customs issued 473 border measure resolutions ordering the suspension of 4,438,313 units of counterfeit products.

Law 19.039 provides for the imposition of fines ranging from $1,800 to $70,000 on any party that attempts, for commercial purposes, to use a trademark that is identical or similar to another trademark that is already registered for the same products, services or establishments, or in relation to those covered by the registered mark.

Any person committing a second or subsequent offence within five years of the imposition of a fine will receive another fine of no less than double the preceding fine.

The law establishes special measures in all matters relating to IP rights. In this sense, rights holders can request preliminary measures before the court, including:

As the criminal penalties provided under the trademark laws are not as high as may be expected, it is not possible to file a civil action seeking remedies and indemnifications in the context of a criminal procedure. The rights holder can file a civil action, but must do so before a civil court.

Nevertheless, in general, this kind of investigation culminates in an alternative dispute resolution measure, a reparatory agreement between the rights holder and the infringer or temporary suspension of the procedure between the General Prosecutor’s Office and the infringer. In this scenario, a rights holder can request economic compensation, especially in the case of a reparatory agreement.

In the context of an IP rights infringement (generally trademarks), rights holders can bring a civil action seeking:

The same preliminary measures relating to criminal enforcement are available in the context of a civil action.

For cases of trademark infringement, damages will be determined by the plaintiff’s election, per general liability rules stated in the Civil Code or one of the following grounds:

Further, the Industrial Property Law provides an exemption from civil liability for parties that have marketed infringing goods, unless such parties have manufactured, produced or marketed the products in full knowledge that they were committing an infringement.

Moreover, in these cases the civil judge can order the infringer to disclose information about persons who have participated in the production or preparation of the goods or the procedures involved in the infringement.

The presence of counterfeit goods in the e-commerce sector is growing year by year and Chile is no exception to this trend. There are no special rules regarding unauthorised internet commerce in Chile, but the infringements provided for under the law also apply to illicit acts committed in cyberspace.

Chilean IP law does not regulate internet security, but does include provisions regarding internet service providers. However, the government has launched a proposal for a national cybersecurity policy, with several actions that must be taken between 2016 and 2022.

It is advisable to investigate potential counterfeit cases online. Counterfeiters commonly use local and regional websites to offer their products; thus, such websites are useful tools to gather information about infringing products and identify infringers.

The presence of local counsel is critical to enforce IP rights on the ground, considering the short timeframe for border measures, the necessary coordination with Customs, the police and the Prosecutor’s Office, and the volume of counterfeit goods entering the country.

Depending on the case, it may be advisable to hire private investigators to identify substantive quantities of counterfeit goods and the locations where they are sold. This information will increase the likelihood of success in potential raids and criminal or civil procedures.

It is very important to verify the obligations of licensees in the context of enforcement procedures. The protection of the relevant trademark is crucial to grow in the local market.

Effective use of technology

It is increasingly necessary to incorporate technology into the investigation and verification process. Depending on the product, technology may emerge as a crucial tool to identify counterfeit goods.

Moreover, infringers are increasingly offering their products through social media, e-commerce websites and blogs, among others, so IP rights protection and defence must cover these scenarios.

In Chile, the Crime Investigation Brigade of Intellectual Property, established in 2008, has conducted the most important investigations in this specific field. It works in coordination with the Cybercrime Special Unit.

It is advisable to establish permanent coordination and record the most relevant trademarks with Customs. Registration allows Customs to have knowledge of a more targeted range of trademarks that can fall victim to counterfeiting, together with immediate information regarding rights holders’ representatives.

Finally, it is advisable to coordinate training sessions with the authorities (Customs and the police), to inform them of the differences between genuine and counterfeit products, while sharing the insights learned from successful cases. 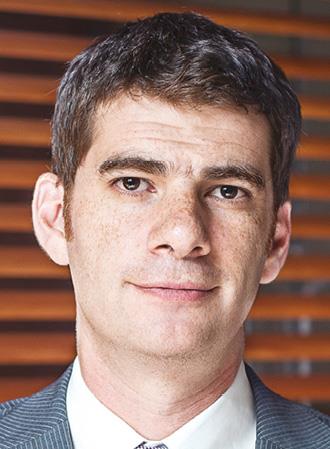 Andrés Grunewaldt is a partner in SILVA and is in charge of the litigation department. He graduated with an LLB from the University of Chile, a master’s degree from Valencia University (Spain) and an LLM from Duke University Law School (United States). Before SILVA, he worked in the General Prosecutor’s Office for several years, leading the economic crime department. He deals with most all major civil and criminal cases regarding intellectual property, unfair competition, advertising law and cybercrime. In 2013 he was invited by the Ministry of Justice to participate in a special commission in charge of the new Criminal Code, specifically to propose new regulation for IP rights crimes.