Print article
Norway
Legal updates: case law analysis and intelligence
In a dispute involving two brands of bottled water, on October 20 2010 the Gjovik District Court held that Water of Norway AS had not unreasonably exploited Ringnes AS's efforts under the Marketing Control Act.

Ringnes, a subsidiary of Danish drinks giant Carlsberg, sued Water of Norway claiming that the latter should be prohibited from manufacturing and using its Polaris water bottles. Ringnes also claimed damages for trademark infringement and acts of unfair competition. The court dismissed all of Ringnes’s claims.

Ringnes bottles artesian well water and sells it under the brand Imsdal. Ringnes had developed its own type of bottle for its products. The current version of the bottle came on the market in 2006. The shape of the bottle is not protected by a registered trademark or design. Each bottle used for plain well water has a capacity of 0.5 litres.

Water of Norway was established in 2006 as a wholesaler for drink products. It was asked by artesian well water company Pure Norway AS to develop a bottle with a 0.45 litre capacity for water from the Polaris well. Hence, the bottles are called Polaris bottles. The new bottles were launched in 2009 and are distributed through the Din Baker AS chain of bakeries.

Ringnes, believing that its Imsdal bottles had been infringed, contacted Water of Norway as the manufacturer of the Polaris bottles. Water of Norway denied any wrongdoing. Ringnes filed an action in April 2010 and the case was heard in the Gjovik District Court on October 5 2010. Judgment was returned on October 20. 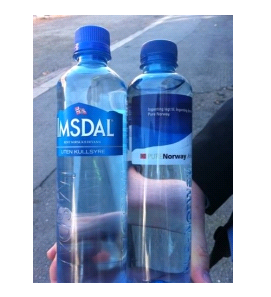 Photo: Water of Norway AS

Ringnes contended that the Polaris bottle was a copy of its Imsdal bottle and constituted an unreasonable exploitation of its efforts under Section 30 of the Marketing Control Act. Ringnes claimed that the copying of its bottle was unlawful, stating that the Polaris bottle was the result of a systematic copying of all of the Imsdal bottle's characteristics and original elements, such as:
In Ringnes's opinion, it was the combination of features, rather than any individual feature, that was protected. Ringnes claimed that the bottles were so similar that there was a risk of confusion based on the general impression of the average consumer.

Ringnes also claimed that, even if the court found that the bottles were not confusingly similar, Water of Norway had violated good business practice by unreasonably exploiting Ringnes’s efforts and results. Finally, Ringnes claimed that its Imsdal bottles had obtained trademark protection through use on the market.

The court first dealt with the trademark issue. It noted that the evidence submitted by Ringnes was inconclusive as to the turnover and market share of the Imsdal bottle, and held that, even though the Imsdal series, which included fruit-flavoured water products, had a significant market share, it could not be concluded whether it was the Imsdal bottle or the Imsdal brand that was known in the market. Thus, it was not certain that the bottle itself was sufficiently known in the market to represent a goodwill value for Ringnes and to enjoy trademark protection.

With regard to Section 30 of the Marketing Control Act, which requires that there be product imitation and a risk of confusion, the court discussed the different features of the two bottles, noting a number of individual differences. The court noted that it had been given little to work with when assessing the danger of confusion (eg, in terms of whether the customers were a homogenous group, the typical purchase situation and what affected the customers' choice of product). The court noted that, while the Imsdal bottle was distributed through 7,000 points of sale, the Polaris bottle was sold only in Din Baker outlets. The Polaris bottles were also usually kept behind the counter in those outlets, so that customers could not take a bottle, but had to request it. The court attached decisive importance to these differences in the way in which the water bottles were distributed and sold, and concluded that there was no danger of confusion. The court found that the similarities between the bottles could be attributed to the limited possibilities of variation, when one took into account the expectations of outlets with regard to the size and shape of the bottles and their suitability for inclusion in the bottle return system.

With regard to Section 25 of the act, the court found that nothing more could be gained by referring to this provision than by relying on Section 30. Thus, the court found for Water of Norway on all points and awarded it costs.

Businesses that invest in the development of trade dress for their products would be well advised to register it as a trademark or design, rather than simply relying on unfair competition laws or betting on their own ability to establish rights eventually by making the trade dress well known.