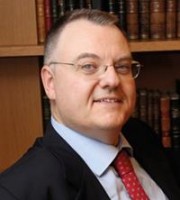 Nikolaos Lyberis graduated from the Athens University Law School in 1983. From 1992 to 2000 he served as a legal adviser at the Hamburg Max Planck Institute for International Private Law, delivering numerous legal advice to inquiring German courts. He obtained his PhD in European economic law from the University of Hamburg Law School.

Since 1993 Dr Lyberis has been a partner at Vayanos Kostopoulos – the oldest IP law firm in Greece – and in 1997 he became managing director of the firm. He specialises in prosecution and litigation relating to patents, trademarks and other IP rights. He also handles counterfeiting matters before Customs and the courts. Further, he successfully deals with contract law, IP licensing, consumer protection law and internet law disputes, as well as domain names and IP protection against unfair competition.

Dr Lyberis and his team at Vayanos Kostopoulos serve leading worldwide pharmaceutical companies and generally represent prestigious clients from Greece, Cyprus, the European Union and third countries in patent, trademark and other IP rights conflicts in all branches of industry and commerce, including cosmetics, consumer goods, automotive, food and beverages, and engineering.

Dr Lyberis teaches IP law at the Law School of the European University Cyprus and has participated as lecturer in training programmes on absolute and relative grounds for refusal for the Greek Trademark Office Examiners. He has authored numerous articles on key topics of IP law for specialised magazines. He is fluent in German and English.