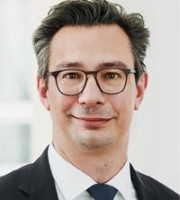 Benjamin Koch heads the Munich office of Lubberger Lehment. He is active in the field of trademarks, design rights, copyright and unfair competition. He advises and represents IP rights holders in relation to the protection and enforcement of their mostly well-known trademarks and other IP rights. Another focus of his practice is IP-related assistance in transactions, in particular in relation to mergers and acquisitions, joint ventures and carve-outs.

Dr Koch studied law at the Universities of Frankfurt, Keele (United Kingdom) and Trier. He started practising as a lawyer in 2001 at Linklaters. Between 2005 and 2008 he served as legal counsel for BMW AG and was in particular responsible for the enforcement of the trademarks and design rights in relation to the BMW, Mini and Rolls-Royce brands in Europe. In 2009 he moved to Baker & McKenzie and built up the firm’s trademark/unfair competition practice in the Munich office (as a partner from 2011). In March 2017 he joined Lubberger Lehment and opened the Munich office.

Dr Koch is a certified IP lawyer (Fachanwalt für Gewerblichen Rechtsschutz). He is continuously recommended for trademark and unfair competition law by the legal magazines and rankings JUVE, WIPR, Who’s Who Legal Germany and The Legal 500 and has been recognised as a leading individual in the field of anti-counterfeiting in WTR 1000 for the past few years. Dr Koch actively contributes to the work of the INTA Unfair Competition Committee.