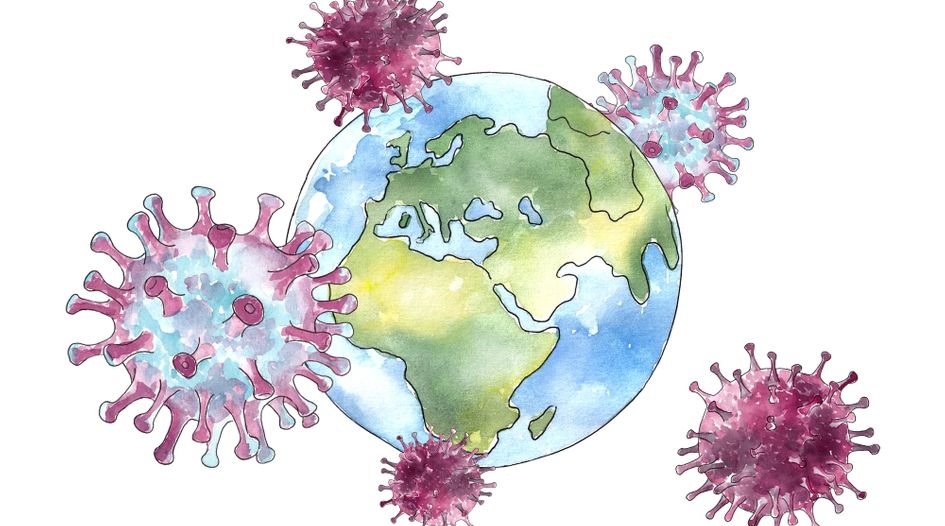 Every Tuesday and Friday, WTR presents a round-up of news, developments and insights from across the trademark sphere. In our latest round-up, we look at Glossier securing protection for its pink pouch, Pakistan promoting the use of GIs, China issuing opinions for destroying infringing and counterfeit goods, and much more. Coverage this time from Trevor Little (TL), Bridget Diakun (BD), Joyce Ng (JN), Jonathan Walfisz (JW) and Tim Lince (TJL).

New trademark twist in Coronil tustle – On WTR we have written at length about the twists and turns in the efforts to market the Coronil product in India. In July we reported that a new medicine, launched by Patanjali Ayurved in India, had stirred controversy over claims that it is a cure for the novel coronavirus – with the trademark registry seen as a key player in the debate as it considers applications for the product’s name. Subsequently that application hit a roadblock after an interim order was placed on it by the Madras High Court. The order came after Chennai-based Arudra Engineering argued that its CORONIL trademark had been on the register since 1993. Yesterday, though, India Today reported on a victory for  Patanjali Ayurved, with the Supreme Court rejecting a petition seeking to prevent it from using the trademark – stating: “In these Covid times, if we prevent use of word Coronil, it will be terrible for the product." The battle continues, however, with challenger Arudra Engineers set to have its day in the Madras High Court. (TL)

Glossier secures protection for its pink pouch – Glossier filed two trademark applications in the spring of 2019 for the protection of its pink ziplock bubble wrap pouch packaging. On Tuesday the USPTO issued a registration for one of these trademark applications, reports The Fashion Law. The millennial brand has secured protection for a certain shade of pink, presumably Pantone’s 705C hue, “as applied to bags featuring lining of translucent circular air bubbles and a zipper closure”. This is a clear victory for the brand, especially considering that Glossier’s application was initially refused by the USPTO. In a July 2019 office action Michelle Dubois, the examining attorney, highlighted a number of issues with the registration. The first was that the pink pouch was determined to be a functional design, but Glossier overcame this by clarifying the registration was for the specific colour pink when applied to this particular packaging. Secondly, Dubois argued that the mark was nondistinctive because bubble wrap is a common feature of transported goods. Glossier hit back with a 252-page response in January which sought to prove that the pink pouch was an indicator of source. The company argued that the use of the colour pink on its packaging has acquired distinctiveness after using it for five years. Glossier gave evidence of third-party articles that mentioned the pink pouch as well as providing examples of consumer social media posts. It appears the USPTO ultimately agreed with Glossier’s arguments and issued a registration on 25 August. (BD)

Banjul marks now effective in Mozambique – Following its accession to the Banjul Protocol in May 2020, it has been confirmed that – from 15 August 2020 – trademarks on the Banjul register can now designate Mozambique. Furthermore, residents in Mozambique can now file trademarks directly with the ARIPO office if they prefer. (TJL)

IPOS unveils new international partnerships – The Intellectual Property Office of Singapore (IPOS) used the backdrop of its annual Singapore IP Week (coverage here and here) to unveil a number of new partnerships. Specifically, IPOS and Cambodia’s Ministry of Industry, Science, Technology and Innovation are working towards recognising designs registrations and accelerate registration decisions, while an agreement was also signed with China’s Capital Intellectual Property Services Association that will see the two provide collaboration opportunities for IP firms, enterprises, research institutes and universities from Singapore, ASEAN and China.  These partnerships follow those signed earlier this year with other countries in Asia and South America. Rena Lee, chief executive of IPOS, said: “Global IP cooperation has taken on greater importance and urgency during the pandemic, especially given the many new medical discoveries that are being made in the fight against COVID-19. The agreements will strengthen global partnerships, which will in turn make it easier and faster for enterprises to respond to the pandemic and grow their business worldwide using Singapore as a hub for their IP activities.” (TL)

Ethiopian IPO gives performance update – The Ethiopian IP Office (EIPO) has posted a performance update from the past 12 months. In comments during the performance review, the agency’s director general Jeremiah Maneberhan gave an “entirely positive” outlook, although “stressed the need to move away from traditional practices and focus on new activities”. He added: “The office's focus in the coming budget year is to create a competitive environment by adding value and quality by focusing on indigenous knowledge. In order to achieve this, a national intellectual property information center has been set up and the country's most popular products have been transformed into brands”. (TJL)

Pakistan IPO promotes GIs – The Intellectual Property Office of Pakistan (IPO-Pakistan) has agreed to enhance cooperation with the Pakistan Agricultural Research Council (PARC) to boost agricultural products through the use of geographical indications (GIs). In a speech, the chairman of PARC, Muhammad Azeem Khan, highlighted the “cooperation between the two departments would be beneficial for the development of agri-sector in the country”. Both organisations pledged to hold GI awareness and training sessions with those in the Pakistani agriculture industry. (TJL)

China issues opinions for destroying infringing and counterfeit goods – The Chinese government has issued the “opinions on strengthening the destruction of infringing and counterfeit goods”, which proposes that such work should prevent these goods from recirculating and removing illegal trademarks is insufficient for allowing them to enter the market. The opinions also clarify that the scope of destruction includes materials, tools and molds used to produce or manufacture counterfeit goods, trademarks, labels, certificates and packaging. (JN)

Could the URS be coming to ‘.com’? – Verisign has proposed making Uniform Rapid Suspension (URS) a consensus policy that would apply to legacy top level domains such as ‘.com’ and ‘.net’, reports Domain Name Wire. The surprise proposal was made during in a Right Protection Mechanisms PDP working group call, when Verisign policy manager David McAuley stated: “Making URS consensus policy would greatly enlarge application of what has become an important and effective tool for addressing trademark infringement and, in doing that, it also addresses other forms of abuse that can be carried along by infringing cybersquatting domains. And this includes technical DNS abuse like phishing, pharming, delivering malware, things like that, and also some forms of content abuse like selling counterfeit goods on a cybersquatted domain.” While the proposal may cause controversy in some quarters (heated debate was sparked when ICANN, in a bid to increase the consistency of registry agreements across all gTLDs”, previously proposed that the renewal of particular TLD registry agreements be based on the approved new gTLD Registry Agreement as updated on January 2014, which means complying with the URS), it would be a positive move for rights owners. (TL)

A generic standoff – Over on Domain Incite, Kevin Murphy notes that the New gTLDs Subsequent Procedures working group’s (SubPro) draft final policy recommendations returned a lack of consensus concerning the treatment of closed generics. The issue is one that will be of interest to trademark owners seeking to follow in the footsteps of the likes of L’Oreal, which in the first round of new gTLDs applied for strings including ‘.beauty’ and ‘.hair’ with the intention of keeping them a closed shop. ICANN pushed back on such efforts but, when considering the issue, SubPro members were split on how to move forward. Murphy notes that some were in the ‘do not allow’ camp and others felt there should be no restrictions. Meanwhile, falling between these two positions were proposals for permitting them with end-user oversight and allowing them to be overseen by a non-profit entity that boasts  a “critical mass” of support from others in the respective industry/area. Murphy concludes: “Because the working group could not coalesce behind any of these proposals, it’s perhaps an area where public comment could have the most impact.” That comment period runs until the end of September. (TL)

Founder of Singapore’s Harry Elias Partnership has passed – Harry Elias, who founded the eponymous Harry Elias Partnership in 1988, passed away on 26 August at the age 83. One of Singapore’s most prominent litigators, he was among the first 12 to be appointed Senior Counsel in 1997. He was also involved in establishing the Law Society’s Criminal Legal Aid Scheme (CLAS) to help the less fortunate obtain free legal representation. “Mr Elias had a remarkable influence and impact on many people. He was truly a unique human being and his legacy is palpable in the spirit and character of the firm he founded,” a press release writes. “While we may mourn his passing, we must celebrate his life, and now live his legacy.” (JN)

Barnes & Thornburg adds IP partner in Dallas – Jerry C Harris, Jr has joined Barnes & Thornburg as a partner within the firm’s intellectual property department. Harris’ practice spans the gamut of intellectual property law, including patent and trademark law, handling matters relating to trademark clearance issues, disputes, infringements, licensing, operations and cancellations, and also advising on preparation and prosecution. Mark Bayer, Dallas office managing partner, said “Jerry is a long-time Texan who knows his way around the Dallas market. He will undoubtedly be a welcome addition to our growing presence in the region, and we’re thrilled to have him.” (BD)

Joseph Matal joins Haynes and Boone – Haynes and Boone has added intellectual property veteran Joseph Matal to its Washington DC team. Matal is the former acting director of the USPTO and one of the principal drafters of the America Invents Act. He joins the firm as a partner. Tim Powers, Haynes and Boone managing partner, commented on the appointment saying “Joe’s keen understanding of the design of the AIA, and the legal arguments and strategies that are often persuasive in PTAB proceedings, will provide an incredible resource to our clients. We look forward to Joe helping us continue to grow and enhance our IP capabilities across the country”. (BD)

K&L Gates hires IP team in Chicago – Patrick Richards, Clare Frederick and Trevor Martin have joined K&L Gates in the firm’s Chicago office. Richards has been appointed to partner, and Frederick and Martin have joined as associates. The trio will be part of K&L Gates’ intellectual property procurement and portfolio management practice. They previously practiced at Richards Patent Law P.C., which was founded by Richards in 2009. Richards has extensive experience in intellectual property and advises clients on patents, trademarks, copyrights and trade secrets. Aside from launching his own legal practice, Richards also co-founded a medical device software company called Resonance Medical. (BD)