US and Chinese bank brands continue to dominate, but challenges lie ahead

Following the release of Brand Finance’s Banking 500 2018 report last week, which identifies the brand value and strength of the world’s 500 largest bank brands, World Trademark Review attended the Brand Finance Banking Forum, a follow-up event that elaborated on the report’s findings and illuminated the most pressing issues banks are facing. Below are some of the key takeaways.

Could the rapid rise of Chinese brands come to an end?

One of the main findings from the report is that the total value of the world’s 500 biggest bank brands have increased by 10.2% compared to the prior year to $1.18 trillion; the world’s ten most valuable brands in particular have demonstrated robust growth with the majority having experienced double digit percentage increases over the last year.

Additionally, China has solidified its position as the leading jurisdiction for banking brands – after overtaking the US in the previous year’s report – as it streaks ahead with growth of 22%. The list of the world’s top ten banking brands nonetheless remains heavily US and China dominated; in ninth place, UK-based HSBC is the sole exception, but it is also the only one among the top to have fallen in brand value. Brexit gloom continues to hang over the UK and its growth over the last year has been noticeably slower than other European countries such as France or Spain. Another prominent development is that Islamic banking brands feature in the rankings for the first time.

While the prolific growth of Chinese bank brands is one of the notable trends of the last few years, its continued success is by no means assured. As pointed out by the morning’s first speaker, Brian Caplen, the editor of The Banker, Bank of Shanghai is listed eighth out of the top ten brand value fallers (with a decrease of 35% in brand value over the last year). In a later Q&A session, when asked about the staying power of Chinese brands and whether they could penetrate the UK market in the foreseeable future, Caplen avered: “There are pent-up problems with China’s economy and a lot of questionable lending – I could definitely see Chinese brands losing their reputation as a result. However, I see no reason why they wouldn’t be able to nevertheless break into the UK market.” David Wheldon, CEO of RBS, added: “The fast-and-loose handling of data by many Chinese companies could be a big obstacle for expansion in the West.” Referring to the wild success of Alipay, he went on to say: “But, if a service is good enough, customers will use it – it’s that simple.”

If you’re asking how to survive instead of how to thrive, you’ve already lost

A recurring topic throughout the event was the need for a truly customer-centric approach as the digitisation of banking services becomes ubiquitous. Peter Estlin Alderman, a senior advisor at Barclays, pointed to four vital factors for banks looking towards the future: the ability to deliver instantaneous knowledge to customers; transparency; the effective use of information and data; and the capability to protect consumers when it all goes wrong.

Nigel Gilbert, CMO of TSB Bank, explained: “It is a pivotal moment for our industry and we should be embracing the changes that redefine what it means to be a bank and what it can do for consumers. If you’re asking how to survive, instead of thrive, you’ve already lost.” He pointed to a survey showing that 71% of respondents felt the Big Five banks in the UK took their customers for granted. He went on to state that these bigger players have become complacent: “They need to improve customer satisfaction levels and to modernise their brands but have been reluctant to do so.”

Technology will, of course, continue to be one of (if not the) biggest drivers of change in the industry. Innovation and open banking have already had a huge impact and Gilbert contended that those who still think of a tech-driven market as the future are failing to grasp that the future is already here. He stated: “Any bank not heavily investing in IT at this point will fade out. But IT investment alone won’t help to establish trust with consumers; a lot of customers are still comfortable with sharing their data. Thus, there is still reason to have physical branches alongside your digital presence. You can’t force people to go digital if they don’t want to and only because you think it is better for your bank.

In terms of competition for traditional banks, Alderman explains that this will come in two main forms: smaller, agile financial players and large digital services companies, such as the likes of Apple, Amazon or Tencent. He asserts: “Traditional banks don’t have the time to slowly evolve because it’s all about speed. These smaller and often digital-only challenger banks are more intuitive when it comes to consumer needs and are able to provide information to customers before they know they need it.”

Meanwhile, wide-reaching tech companies dominate the 2018 list of the world’s most valuable brands and these giants increasingly command a much larger share of the market than banks. While three banking brands featured among the world’s top ten brands back in 2007, today only one does – ICBC. Bill Gadja, global head of innovation and strategic partnerships at Visa, believes that consequently, consolidation in the market is practically an inevitability: “Banks will buy up smaller challengers because they can’t move fast enough otherwise to build a new layer on top of their existing legacy layer. Big tech firms will also buy up banks – we will see consolidation both ways.”

A future where only a small handful of banks survive

The final speaker of the morning was Phil Mochan, founder and CEO of Koine Finance, who painted a bleak image for the future of banking: he predicted over 80% of banks would fall to the wayside by 2038 as they fail to overcome what he dubbed ‘the digital chasm’. Pointing to the automotive sector, he highlighted that at the inception of the industry there were over 200 manufacturers in the United States; today, there are only three major players and a slightly larger handful of niche manufacturers. Mochan’s belief was that the same would eventually happen to the banking market. He suggested a possible future where the US market is governed by a small handful of non-lending reserve banks and where the need for banking licences fades as financial services become more fragmented.

His bold predictions were, however, met with sharp scepticism by some of the other speakers, and a heated debate shortly ensued between Mochan, Caplen and David Haigh, CEO of Brand Finance, about the plausibility of such a scenario, which concluded with Caplen jokingly – though perhaps only partially – stating that his money would never be placed in one of Mochan’s banks of the future. 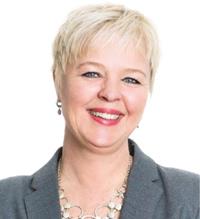