In this week’s country data report, World Trademark Review provides a breakdown of the Australian trademark landscape. We examine the country’s filing statistics, take a look at the performance of its leading brands and analyse key litigation data.

A record-breaking economy but low growth in filings

Having avoided recession for 26 consecutive years, Australia recently set the record for the longest run of uninterrupted economic growth in the developed world. This has served as a solid foundation for its full-bodied trademark scene, which has in turn contributed to its bustling economy by offering businesses comprehensive protection of their IP rights. The country can often be seen operating at the vanguard of the global trademark market – whether for good or bad: in 2012 it implemented its Tobacco Plain Packaging Act, the first of its kind in the world, which has subsequently set in motion the spread of plain packaging around the world (we previously analysed the effect plain packaging laws had on brand owners in Australia in our tobacco data report). More recently, IP Australia – an agency which is part of the Department of Industry, Innovation and Science that administers IP rights in the country – announced the development of a world-first internationally-linked trademark database.

Against this backdrop, trademark application levels remain healthy from both residents and non-residents, as seen in the graph below. As noted in IP Australia’s Intellectual Property Report 2017, the vast majority of domestic applications came from SMEs and private individuals in 2016 – together they accounted for over 90% of local applications. 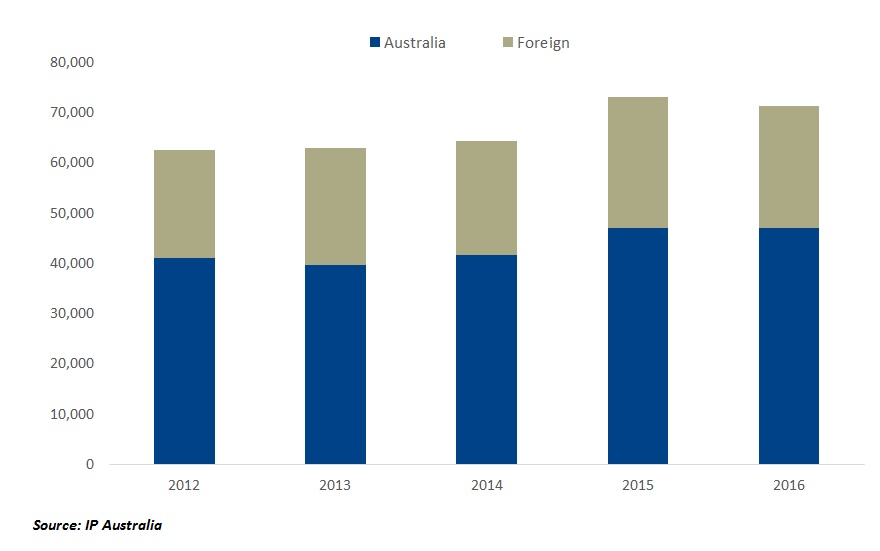 However, despite the robust economic growth Australia has enjoyed, it is notable that filings have remained more or less stable. As observed by Robert Reading, director, custom and managed solutions at CompuMark, the rate of growth clearly lags behind that in other leading countries: for example, the 8% growth per annum in the US; 17% in the UK; 48% in China; and 19% in Japan.

Despite not having to grapple with rising filing volumes, proceedings at the office can be an unduly long process and there is room for the trademark office to improve its performance. In World Trademark Review’s innovation index of IP offices, of the 40 analysed Australia comes joint 17th with Colombia and Switzerland. It lost ground to many other offices principally for its lack of value-added propositions, including trademark dispute mediation services, IP legal advice for SMEs and regular liaison with enforcement agencies.

IP Australia has been taking steps to improve its services though and its increasingly technology-focused approach has been met with praise by private practice lawyers. In addition to the aforementioned trademark platform, it has recently launched a new interface for trademark revision and a significantly improved trademark search system.

In terms of the spread of trademark filings by Nice Class, there are some noticeable deviations compared to the global average (see graph below). Some differences in particular that stand out are the lower level of filings in Australia in classes 29 (meats and processed foods) and 30 (staple foods), and conversely the considerably higher applications in classes 36 (insurance and financial services) and 41 (education and entertainment services).

Commenting on these discrepancies, Brett Doyle, a special counsel who leads the trademark group at Clayton Utz, states: “For classes 29 & 30, the grocery and supermarket sector is highly concentrated in Australia and so the range of new food products being brought to market may not be as high as in other markets. There certainly does not seem to be many advertising campaigns for new food products. So, the major supermarket chains seem to be concentrating on their own core trademarks.”

With respect to the higher filings in classes 36 and 41, he adds: “The Australian financial sector is very strong but traditional banking is fairly stagnant, so traditional institutions are bringing more innovative products to market. There is a lot of activity in the wealth management sector and compulsory superannuation has meant that there is a lot of money in the market for investment. Both financial advisors and traditional accountants have become more brand aware. With regard to Class 41, the education sector is now a very important part of the country’s economy with a large number of foreign students undertaking courses in Australia. There has, over the past few years, been a proliferation of new educational and training institutions, especially for skills-based training.”

It is also worth mentioning that in the last decade, there has been a gradual but perceptible increase in filings for service marks. In 2017, applications in the services classes (classes 35-45) made up 44% of all filings, according to CompuMark, which is equal to the corresponding figure for the UK and higher than that of the US (38%).

Turning to enforcement, trademark litigation, both judicial and administrative, is a costly and time-consuming endeavour in Australia. According to global IP case law database Darts-IP, the average duration of trademark dispute proceedings over the last five years – including both courtroom litigation and office oppositions – is 26 months, as seen in the graph below. For comparison, in our previous country data report, we noted that the average length of court proceedings in Germany for branding disputes was less than half that time. 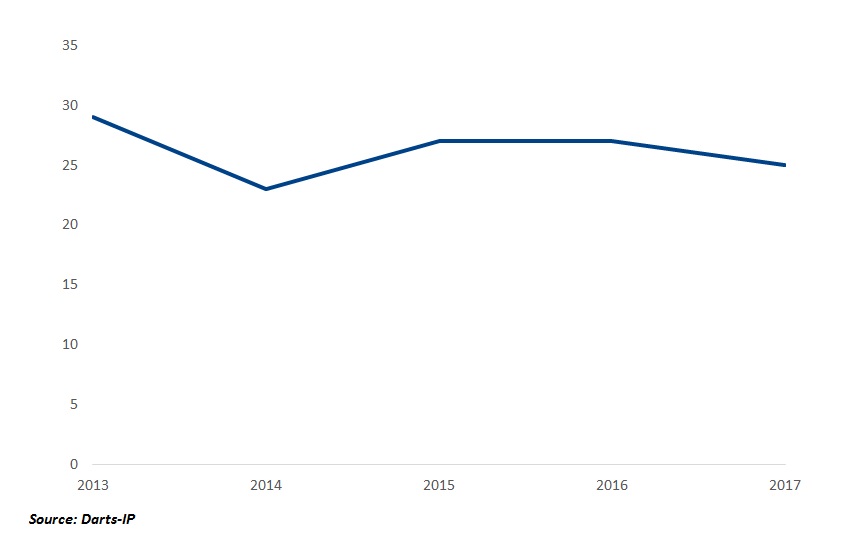 Peter Chalk, a partner at Ashurst, explains: “The office was previously far too lenient with granting extensions of time, but there was a change in the law in 2013 which limited the scope of these extensions and the length of time for oppositions has come down to roughly 18 months. As far as the Federal Court is concerned, there are several reasons why cases take so long. First, it does not hold parties to timetables and extensions for filing evidence are too readily obtained. Secondly, it is virtually impossible to obtain summary judgment in the Federal Court. Thirdly, Australian substantive and procedural (particularly the rules of evidence) laws are unduly complex, and this adds to the time it takes to run cases. Fourthly, there are no time limits by which the court must deliver judgment – it is not uncommon (particularly in the Sydney Registry) for judges to take over 12 months to deliver judgment at first instance. So long as the laissez-faire approach to case management in the Federal Court remains, and Australian law and practice remains as complex as it currently is, there will be no changes to the timing of cases.”

As a result, many brands owners in the country eschew courtroom litigation in favour of office actions. However, Darts-IP points out that the success rate of plaintiffs in trademark disputes has hovered around 95% in the last five years. This is a surprisingly high figure, and for Chalk it is sharply at odds with his own experiences, both at the trademark office and in the courtroom. Katrina Rathie, a partner at King & Wood Mallesons, also finds the statistic surprising. However, she offers a possible explanation for the high success rates: “Australia has a strong record of protecting and enforcing IP rights. We have a robust examination process at IP Australia and only reasonably distinctive marks tend to be registered. Accordingly, once a trademark is registered, it provides a fairly strong measure of protection against infringers. Additionally, our legal system is on the expensive side, so only the most important cases tend to be litigated by brand owners who can afford to take the cases all the way through the courts.” It also helps, as Rathie adds, that Australia has no shortage of high quality IP litigators who act on behalf of these brand owners.

In terms of which companies have been filing the most trademark cases as of late, Monster Energy tops the table, as seen below. This isn’t too surprising given that the company has made the headlines numerous times for its attempts to enforce its IP rights, including in the Asia-Pacific region. In 2015, it even earned the unenviable (and as we argued, misleading) title of ‘trademark bully’ of the year.

Despite the robust economy, over the last year many of Australia’s leading brands have struggled to improve in value, with six of the top ten brands having decreased in worth, as seen below. Of these, Woolworths has experienced the most noticeable decline in recent years. It was the nation’s most valuable brand between 2009 and 2015 but slipped to second place in 2016 after sales began to slow for the supermarket chain. Intensifying competition from foreign supermarkets has caused it to drop another three places in the 2017 Brand Finance rankings. Its diminishing profits have also not been helped by a decline in its perceived brand strength. 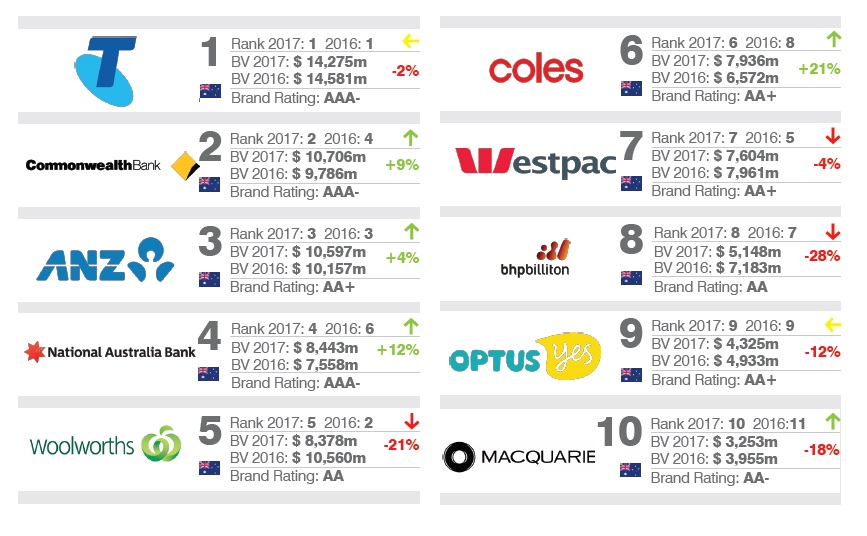 Taking the top spot from Woolworths last year was Telstra, which had experienced a 37% surge in brand value despite returning only a 3.6% increase in revenue. However, the telecoms giant has not been without its problems either: this year, its brand value dipped slightly as it, too, deals with issues of profitability. Branding is clearly important to it, though, as apparent by its ownership of the largest active trademark portfolio of the top ten brands, according to intelligent trademark platform TrademarkNow (see graph below). It is worth observing that Telstra is not the only brand that has to contend with the many challenges of Australia’s telecoms sector; Optus has also seen a conspicuous fall in value even in spite of its strong customer growth. 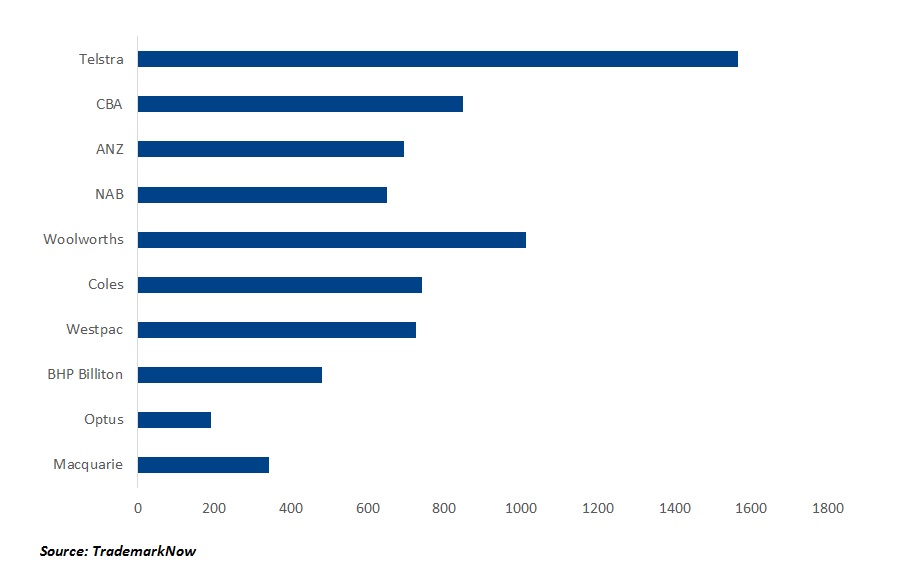 As mentioned previously, Australia is home to a vigorous banking market, and this is reflected in the list of its most valuable brands, with half of them operating in the financial services sector. In particular, the Commonwealth Bank of Australia (CBA), ANZ and National Australia Bank have all enjoyed small surges in their brand value. CBA’s 9% jump in value makes it the country’s most valuable banking brand, but it is also Australia’s most powerful brand. However, as noted by Brand Finance, their continued performances will partially depend on the Trump administration’s agenda. If US GDP growth improves, so too will the performance of Australian banks, which would benefit from the exposure to positively impacted commodity prices.

Local applicants eyeing China over the US

As to where Australian brands are filing internationally, in 2017 China overtook the US as the most popular destination for Australian applicants (see graph below). This shouldn’t come as a shock – China’s thriving markets have made it an attractive prospect for brand owners across a range of countries and industries. However, Australia can be especially thankful for China’s prosperity. As Saul Eslake, an independent economist who has covered Australia for over three decades, puts it: “There’s no country on Earth that has derived more benefit from the rapid growth and industrialisation of China over the last 30-odd years than Australia.” The proximity and trade between the two countries has been a significant contributing factor to Australia’s resilient economy. 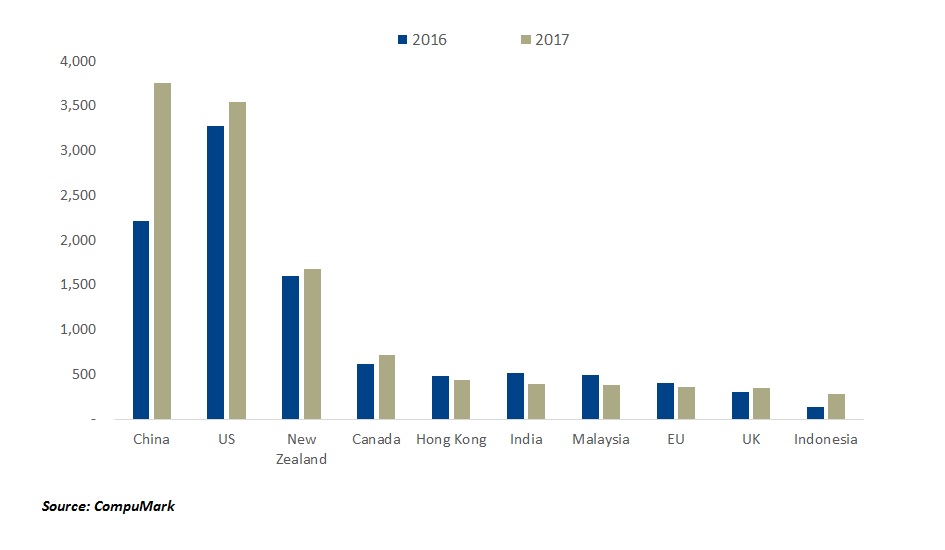 In terms of which trademark classes are being filed for in China, Class 33 (wine and spirits) is the most popular category. China is by far Australia’s most valuable market for wine exports – over the last year alone, the export value into China has increased by 42%.

Aside from the steep jump in applications in China, it is worth highlighting the decrease in EU trademark applications and the simultaneous rise in UK filings. This is likely linked to Brexit, as some of the applicants previously filing for an EU trademark may have, in fact, only been interested in establishing rights in the UK.

Although China is the top choice for domestic applicants, when it comes to countries filing into Australia, the US is still the clear leader. 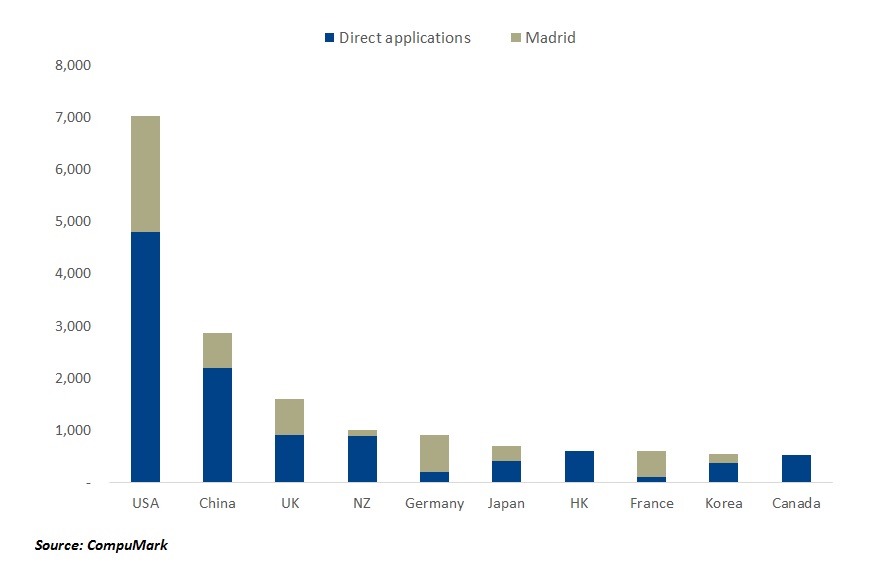 Australia’s healthy economy and role at the forefront of trademark developments are both promising signs for local brand owners. Although the nation’s leading brands have failed to show the same level of robust growth that we have observed in other leading markets, there is little doubt that Australia places a great deal of importance on the establishment and protection of IP rights. 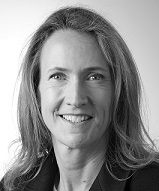