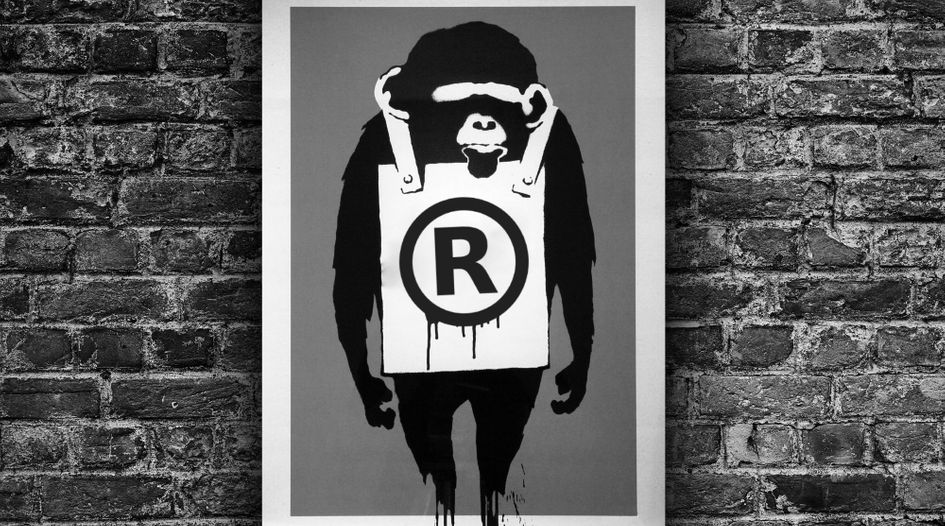 In a new decision issued by the EUIPO Cancellation Division, a trademark owned by street artist Banksy has been declared invalid. Talking exclusively to WTR, the attorney who represented the opposing party in the case said “the real nail in the coffin” that led to the ruling was “the public comments of Banksy and his lawyer”.

The decision was published by the EUIPO Cancellation Division yesterday and is a continuation of a long-running dispute between Banksy’s legal handling entity, Pest Control Office Limited, and UK-based greeting card company Full Colour Black Limited. Pest Control Office first filed an EU trademark for Banksy’s ‘monkey sign’ artwork in November 2018, which reached registration in June of the following year. However, in November 2019 Full Colour Black formally sought cancellation of the mark, claiming that it was filed in bad faith and that it was non-distinctive.

This week’s decision by the EUIPO Cancellation Division ruled that Banksy’s EU trademark is “declared invalid in its entirety” and that Pest Control Office will “bear the costs” of the case. The decision repeatedly references a similar cancellation request from Full Colour Black for an earlier EU trademark owned by Banksy for his ‘flower bomber’ artwork, which was eventually declared invalid in September 2020.

That specific dispute gained global attention after Banksy launched a homeware shop called Gross Domestic Product in October 2019 in an effort to demonstrate use of the trademark. At the time, Banksy issued a statement saying that opening a shop because of a legal dispute “is possibly the least poetic reason to ever make some art”, additionally claiming that “a greetings card company is contesting the trademark I hold to my art and attempting to take custody of my name so they can sell their fake Banksy merchandise legally”. A representative for Banksy also stated that the artist “had been advised the best way to prevent [losing the trademark] was to sell his own range of branded merchandise”, while one of his legal advisers described the case as “frankly ludicrous” and outlined the legal strategy in comments to the press.

Those comments, and the opening of the shop, have come back to haunt Banksy in this week’s dispute. In scathing comments, representatives at the EUIPO Cancellation Division said that public comments made during the opening of the store demonstrated that Banksy “was not trying to carve out a portion of the commercial market by selling his goods, [but] was merely trying to fulfill the trademark class categories to show use for these goods to circumvent the non-use of the sign requirement under EU law”. Therefore, they stated: “By their own words, they admit that the use made of the sign was not genuine trademark use in order to create or maintain a share of the market by commercialising goods, but only to circumvent the law.” Such a move, they added, is “inconsistent with honest practices”.

Talking to WTR, Blaser Mills head of intellectual property (and consultant trademark attorney) Aaron Wood, who represented Full Colour Black in the dispute, says “the real nail in the coffin was the public comments of Banksy and his lawyer”. He adds: “I think the key problem for Banksy was that he said little or nothing about his plans other than the public statements around the pop-up. Frankly, they were disastrous for his case, and whilst bad faith is difficult where one has to mosaic together behaviour, it is far easier where the party seals their own doom.”

Also notable in the Cancellation Division’s decision is the reference to Banksy’s anonymity and aversion to IP rights (he famously claimed that “copyright is for losers”). The ruling states: “Banksy has chosen to remain anonymous and for the most part to paint graffiti on other people’s property without their permission rather than to paint it on canvases or his own property. He has also chosen to be very vocal regarding his disdain for intellectual property rights, although clearly his aversion for intellectual property rights does not annul any validly acquired rights to copyright or trademarks. It must be pointed out that another factor worthy of consideration is that he cannot be identified as the unquestionable owner of such works as his identity is hidden.”

The particularly critical stance taken by the Cancellation Division was unexpected, says Wood: “The most surprising part for me was that they repeated the comments about Banksy’s disdain for IP rights, which was a point on which there had been criticism of the earlier decision as ‘overreaching’.”

Looking ahead, Wood does not expect Pest Control Office to appeal (as the entity did not appeal the previous cancellation ruling in September 2020). Banksy should also expect more blows in the weeks ahead, he adds: “They have re-filed the ‘flower bomber’ trademark – which was the subject matter of the earlier decision – and this time around have sought extra time to provide evidence that this mark is used on swing tags and other locations by Banksy. We shall see whether that has any truth or if it was just an attempt to push back the inevitable tide. Ultimately, there are five more cases before the EUIPO and I anticipate four of them being decided within the next month or so in the same way as this latest decision.  The final one, which is in regard to the re-filed ‘flower bomber’ mark, will come later but if anything is an even stronger case.”

It is not just Banksy’s EU trademarks that could be at risk following this week’s decision. Many of the applications filed by Pest Control Office around the world are based on registered rights in the European Union. If those are cancelled, the other registrations could be as well. “I believe the decision sounds the death knell for his trademark portfolio – at least in the European Union – and it raises the spectre of cases in other countries,” Wood claims. “In the United States, for example, you have to make a declaration of your intent to use a mark and the effect of fraud is substantially more important. I dare say a finding that Banksy is a fraudster will not go down well.”

WTR has reached out to Pest Control Office for comment.