Every Tuesday and Friday, World Trademark Review presents a round-up of news, developments and insights from across the trademark sphere. In today’s edition, we look Amazon partnering with two brands to file several federal lawsuits against parties accused of selling fake goods, how brands got creative on International Women’s Day, and how the success of Marvel’s Black Panther movie has led to a number of trademark applications. Coverage this time from Trevor Little (TL), Tim Lince (TJL), Adam Houldsworth (AH) and Timothy Au (TA).

Brands get creative for International Women’s Day – In celebration of International Women’s Day yesterday, many brands around the world were eager to show their support. Some brands even underwent a redesign, such as Scottish brewery BrewDog (which rebranded its Punk IPA beer to ‘Pink IPA’) and Johnnie Walker (which replaced its famous marching man on its Scotch whisky bottles with a woman). Others released new products as part of overarching initiatives to support women: FEED began offering a special line of tote bags, while Mattel unveiled a new series of Barbie dolls featuring well-known female celebrities and role models. Elsewhere, many companies opted to release promotional videos. For example, Uber uploaded a 3-minute film to its Asia-dedicated channels that targeted the stereotype that women can’t drive, while Nike has been enjoying much success with its motivational video, featuring Serena Williams, with the message “there’s no wrong way to be a woman”. Other initiatives from major brands include Google’s announcement that businesses on Google Maps can now label themselves as women-led businesses – in addition to its promotion of a variety of women’s stories – and, in a more outlandish move, McDonald’s decision to turn its famous logo upside down on one of its stores in California. Although the decision to show support for International Women’s Day is a positive – especially given the recent rise of feminist-focused campaigns such as the #MeToo movement – brands would do well to remember to tread carefully. For example, as part of its release of the Pink IPA beer, BrewDog attempted to draw attention to the gender pay gap – but soon had to admit it paid women almost 3% less than men on average. Mattel’s new Barbie products also attracted criticism from some commentators for the figures’ unrealistic body shapes, and the doll based on Frida Kahlo specifically is not sitting well with the late Mexican artist’s relatives. Meanwhile, McDonald’s drew the ire of social media users, who labelled the fast food giant’s gesture of flipping its iconic symbol as without meaning and substance. It’s another example, then, that brands wading into social causes must ensure they are prepared for the inevitable push-back. (TA)

Tesla overtakes rivals in brand value – Brand Finance has released its latest industry report, this time focusing on the motoring sector. The brand value ranking was topped this year by Mercedes-Benz, which claimed pole position over previous top ranked Toyota. BMW was in third position. But it is the rise of Elon Musk’s Tesla brand that saw particularly notable growth. It rose from 30th to 19th place, with the brand now valued at $5.6 billion. Brand Finance chief executive David Haigh commented that Tesla saw such significant growth because “it has been built upon the premium styling of their distinctive vehicles and a very growth-focused corporate vision which aims to bring a more affordable model to market very soon”. However, he warned: “Doubts exist whether Tesla has the manufacturing capability in the short-term to satisfy consumer demand in terms of both volume and quality to match the brand expectations that they have created. By contrast, some industry incumbents have built their brands with over a century of experience in delivering on customer expectations." While Tesla does not necessarily have heritage on its side, what other motoring brands have blasted one of their products into space? (TJL)

New initiative to tackle shipping counterfeiting launched – This week saw the beginning of the ‘Know Your Customer’ initiative, which is aimed at tackling the problem of counterfeit goods being transported by international shipping companies. The scheme, which promotes a voluntary framework of best practices agreed upon by maritime companies and brands, was launched on Wednesday in Long Beach, California, by the International Chamber of Commerce (ICC). It emphasises the importance of shipping operators taking a number of steps to ensure that they know they are dealing only with legitimate customers. Such measures include verifying customers’ legal existence, and checking relevant databases and registrations. Director of the ICC’s Business Action to Stop Counterfeiting and Piracy unit, Sophie Peresson, described the initiative as “one more concrete example of the successful collaboration between brand owners, vessel operators (and) freight forwarders”. (AH)

Amazon partners with brands in anti-counterfeit lawsuits – Amazon yesterday filed several federal court lawsuits against several parties it accuses of selling fake goods on its e-commerce platform. The online retailer is partnering with affected brands Vera Bradley and Otter Products in taking alleged counterfeiters to court, it has been reported. These actions have come about just days after Amazon was criticised publicly for its failure to effectively tackle the sale of fake goods on its platform. As World Trademark Review reported, a blog by Casey Hopkins of Elevation Lab late last week accused Amazon of being “complicit with counterfeiting” for allowing offenders to remain anonymous and setting up their listings in a way that leads consumers to buy fake goods unwittingly. The blog elicited a rare statement from Amazon insisting that it “strictly prohibits” the sale of counterfeit goods on its site, and that it is constantly working to “strengthen protections” for brands. Following yesterday’s filings, an Amazon spokesperson declared that the company would continue to “partner with stakeholders” to protect the integrity of its marketplace. (AH)

A trademark defense of Trump – An op-ed piece on Bloomberg, authored by Yale University professor of law Stephen L Carter, has taken issue with the “strange consensus” that the president’s use of the presidential seal on Trump merchandise is criminal. It may be tacky, he concurs, but unofficial, commercial-related use of the seal is not a crime. Having examined both the nuances of the  federal statute regulating use of the presidential seal (which is tailored to further “the legitimate interest in preventing the seal’s deceptive or misleading use”) and trademark law, he argues – for example – that placement of the seal on tee markers for a Trump Organisation golf course does not imply an endorsement, adding: “But even if we conclude that some golfers playing at a Trump course might imagine that the president endorses the facility, I’m afraid we crossed that bridge when the horse left the barn to search for spilled milk: the name at the entrance to the golf course is already kind of a hint. If the Trump Organization does wind up using those tee markers, let’s use reasonable language. We can call the gimmick uncouth or silly or déclassé, but none of those things are illegal.” (TL)

Wakanda targeted by trademark applicants – It would appear that the ground-breaking success of Marvel’s Black Panther – which has already set a number of box office records – has served as inspiration for several recent trademark filings – specifically in the alcoholic drinks space. As reported by The Blast, a Texas-based individual filed for a trademark relating to Wakanda, the fictional nation that features in the film. The application for “Wakanda Wine Fest” includes usage for “charitable donation services, namely, providing educational special events, seminars, workshops in the field of wine”, as well as “entertainment exhibition in the nature of wine tastings and wine festivals”. Meanwhile, TMZ reports that last week a UK company filed for both “Wakanda” and “T Challa Black Panther” in relation to alcohol products. The Blast also notes that Marvel submitted documents to protect the term ‘Wakanda’ back in November for a variety of uses. (TA)

“Relentlessly aggressive” EU GI regime comes under attack in Special 301 submission – This week we wrote about the debate over geographical indication protection in Europe after British media outlets hit out at US lobbying from the United States are pushing for the UK to drop GI protection to allow the importation of “American copies” of products including Cornish pasties, Scotch Whisky and Melton Mowbray pork pies. Days later, Intellectual Property Watch reported on a submission to the Office of the US Trade Representative’s annual Special 301 consultation, which calls on the US government to help them defend their products against what they characterised “relentless” and “aggressive” efforts by Europe to promote adoption of GIs to the detriment of the US common-named goods. The Consortium for Common Food Names contends that the EU continues to “unfairly use government dictates to eradicate competition for its producers in Europe and around the world”. geographical indications are clearly developing into the hot button political issue with respect IP law. (TL)

Quarles & Brady adds expertise – Lori Meddings has joined Quarles & Brady as a partner in the intellectual property practice group in the firm’s Madison office. Meddings has experience of counseling and assisting clients on a variety of trademark prosecution and enforcement matters and has handled opposition and cancellation proceedings before the Trademark Trial and Appeal Board (TTAB). She has also been successful in registering and enforcing trade dress, in particular colour trade dress, in the US and other jurisdictions. (TL)

DLA Piper gets a new chair – DLA Piper has named partner Thomas Zutic as chair of the firm's trademark, copyright & media practice in Washington DC. Zutic's practice encompasses trademark counseling, with an emphasis on the selection, adoption and use of trademarks, domestic and international trademark prosecution, and trademark portfolio management. Zutic currently serves as the Washington DC practice group leader for the first year associates practice, as well as chair of the Washington DC diversity & inclusion committee. He also leads the firm’s LGBTQ affinity group and is a member of the its North American pro bono committee. (TL)

The inside track on protecting your brand online – The latest edition of Online Brand Enforcement: Protecting Your Trademarks in the Electronic Environment, offering cutting-edge analysis and insight into brand protection strategies, has been published online. The free-to-view publication is designed as an indispensable reference guide for senior brand executives, trademark counsel and anti-counterfeiting practitioners across the world, exploring the vital issues behind online brand protection and the legal frameworks governing the digital marketplace. Click here to access the latest analysis and insight into protecting your brands in the online environment. (TL) 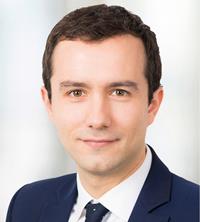