By Viacheslav Rybchak and Ilya Goryachev

The pharmaceutical industry is a high-tech development priority and pharmaceutical production must happen alongside the development of an appropriate IP protection strategy. Pharmaceutical trademarks owners would be well advised to consider any issues in the context of the Russian market.

The pharmaceutical industry is currently one of the Russian economy’s high-tech development priorities. According to analytical data, in 2019 the Russian commercial drug market was worth Rb84.3 billion (approximately $1.3 billion), an increase of approximately 7.9% from 2018.

The Russian pharmaceutical market remains an interesting area for foreign investors. Since 2010 eight drug manufacturing plants have been built in Russia by some of the world’s largest pharmaceutical companies. At the beginning of 2019, Novartis, Bayer and Sanofi were the leaders of drug sales by volume in Russia.

Under the Law on Circulation of Drugs (2018), medicines can be manufactured, stored, imported, exported, advertised, sold and used in Russia only if they are registered by the Ministry of Health (with the exception of special cases) and it has granted a marketing authorisation.

The law prohibits the registration of:

Simultaneously, the Civil Code does not restrict the types of medicines for which trademarks can be registered. In obtaining trademark registration, the holder acquires an exclusive right to use the mark for any pharmaceutical product, regardless of its composition or purpose (unless the holder has limited the list of covered products by specifying compositions or purposes). However, the rights holder must comply with the requirements imposed by the Law on Circulation of Drugs when using the trademark for pharmaceutical products.

In 2016 the Ministry of Health adopted the Rules for Rational Choice of Trade Names for Medicines. According to these, an applied-for name must not be identical or confusingly similar to the name of any medicine already registered. Further restrictions include that the name must not be deceptive with respect to the composition and properties of the medicine or manufacturer and must not include designations that are identical or similar to geographical or personal names.

Trademark registration requirements are regulated by Part IV of the Civil Code, which establishes the following grounds for the refusal of registration, including for those marks intended for pharmaceuticals:

These provisions do not apply if the mark has acquired distinctiveness through use in Russia (which must be proved with reference to the period of use before the filing date).

Further, designations cannot be registered as trademarks if they:

The law prohibits the registration of designations that are identical or confusingly similar to earlier trademarks, firm names and commercial designations that are protected in Russia. However, there is no provision directly prohibiting the registration of trademarks that are confusingly similar to prior registered pharmaceutical names. Nevertheless, a trademark can be cancelled on the basis of a prior pharmaceutical name duly registered in the state register. The grounds for cancellation can be the descriptiveness of the trademark or its capacity to mislead consumers in respect of the goods or manufacturer.

In 2015 the Russia Patent and Trademark Office (Rospatent) accepted cancellation actions against the trademarks SULSENA (Russian Registration 377521, 375705) and DISULSEN (Russian Registration 367350), based on the fact that these were confusingly similar to the name of the pharmaceutical substance ‘sulsen’, which was registered in the State Register of Medicines in 1971. Both trademarks were cancelled due to descriptiveness in respect of one part of the covered goods (which contain or are made of sulsen) and deceptiveness regarding the composition of another part of the covered goods.

When selecting a name for medicines, it is recommended that searches be conducted in the relevant databases, including searches for prior trademarks, firm names and names registered in the State Register of Medicines, to ensure that no potentially conflicting names exist.

Such searches are extremely important, particularly in light of further legislative trends. A draft law is currently under public discussion which will oblige the marketing authorisation applicant to provide the trademark information relating to the medicine for which the marketing authorisation is filed, as well as to issue a written declaration stating that the registration of the medicine will not infringe third parties’ rights to trademarks (and inventions).

The Civil Code contains no specific provisions regarding INN regulation. Nonetheless, a trademark will be refused registration where it is identical or confusingly similar to an INN. This approach is confirmed by IP Court practice.

In 2015 Rospatent refused to cancel the trademarks BRAVADIN (in Latin and Cyrillic text) (IR 1086422, 1058997) and disregarded the argument that the marks are derived of and confusingly similar to the INN ‘Ivabradine’. However, the IP Court considered Rospatent’s decisions to be invalid and cancelled the trademarks, reasoning that they are derived from the INN Ivabradine as a commonly used term which may mislead consumers in respect of the product’s nature. The IP Court also declared that trademark registration is contrary to public interest.

In conflicts between trademarks and pharmaceutical names, special attention is paid to the similarity of goods. According to the general point of view, the pharmaceutical field is directly connected with consumer health and therefore a stronger and more specific approach is required to evaluate the similarity between the conflicting names and goods.

In 2018 Rospatent refused the registration of the trademark APIZARTRON (in Cyrillic text) (Application 2016747372) for Class 3 goods (cosmetics). The refusal was based on a prior registered identical pharmaceutical name (registered for a skin ointment) and a prior identical trademark of the same manufacturer for goods in Class 5 (pharmaceutical preparations). Rospatent considered the Class 3 goods to be similar to the protected goods in Class 5, taking into consideration the identity of the conflicting names.

In 2017 Rospatent refused the registration of the trademark VALEODIKRAMEN (in Cyrillic text) (Application 2015737901) and stated that the goods (sedative preparations, for which the registration was claimed) were similar to the biologically active additives covered by a prior similar trademark. Rospatent stated that while biologically active additives cannot be considered to be a kind of medicine, they do have a similar purpose and are applied in the same field for the maintenance of human health.

Pharmaceutical trademarks are subject to the same non-use cancellation issues as other trademarks. Russian law provides for a three-year grace period. There is a mandatory pre-trial procedure, where the interested person must file an offer to the rights holder asking for abandonment of the trademark or its assignment. Within the given terms, the dispute may be transferred for consideration before the IP Court.

Advertising involving pharmaceutical trademarks is governed by the general provisions of Article 5 of the Federal Law on Advertising (13 March 2006, 38-ФЗ), as well as by the special provisions under Article 24.

In particular, according to Article 24, the advertising of medicines should not:

These special provisions should be carefully considered, since mentioning the pharmaceutical trademark may qualify as the advertising of medicines for which the trademark is registered.

The enforcement of pharmaceutical trademarks is subject to the general provisions of Part 4 of the Civil Code.

The trademark owner may claim:

The following types of compensation may be claimed:

Administrative cases under Article 14.10 of the Code of Administrative Offences, as a result of raids and seizures, are available in Russia with the involvement of the police or Customs. Such cases may result in the seizure and destruction of counterfeit products, as well as in administrative fines (up to five times the price of the goods held to be counterfeit) on officials and the company.

For regular counterfeit issues, it is highly recommended that the pharmaceutical trademark be recorded in the Customs register of the IP objects. Such recordation is aimed at ensuring regular cooperation with the customs authorities to seize the medicines that are imported without the authorisation of the rights holder.

Russian law also sets out effective options of using unfair competition cases against trademark infringements that may result in an injunction against commercialising the goods, as well as in an administrative fine of between 1% and 15% of the amount of the income, but not less than Rb100,000 (approximately $1,500).

The most serious infringements may be heard as criminal cases as a result of the raids under Article 180 of the Criminal Code (the precondition of which is either repeated trademark infringement or causation of significant damage which, from a criminal law prospective, in Russia is approximately $3,500). Criminal penalties may be imposed only on individuals and may include fines, mandatory or correctional public services works or imprisonment.

Pharmaceutical trademarks are important tools for the pharmaceutical industry from a number of different perspectives. During the whole lifecycle of medicine at issue, the trademark owner should consider all issues in the context of the Russian market. 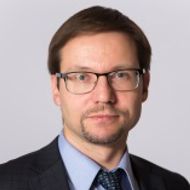 Viacheslav Rybchak graduated from the Moscow State University of International Relations in 1998 as a lawyer specialising in international private law and IP law. He joined Gorodissky & Partners in 1999 and in 2017 was promoted to partner at the firm.

Mr Rybchak specialises in obtaining legal protection for trademarks and appellations of origin of goods in particular prosecution proceedings for trademarks and appellations of origin of goods in Russia, the Commonwealth of Independent States and the Baltic states. He also counsels clients on all matters pertinent to the protectability of designations registered as trademarks and geographical indications. Mr Rybchak is intensively involved in invalidation and cancellation proceedings, representing clients before Rospatent and in the courts. He is a regular speaker at IP seminars and conferences in Russia and abroad, and is also an author of several publications in foreign IP professional magazines. He is a member of the Pharmaceutical Trademarks Group. 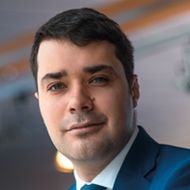 Ilya Goryachev graduated from the Moscow State Linguistic University in 2012 as an international lawyer. He focuses on providing legal support on IP and general commercial matters, including unfair competition, domain disputes, licensing, assignments, franchising and other IP-related transactions, advertising and marketing regulations, IP issues in M&A transactions, IP due diligence, personal data protection and industry-related regulatory affairs, including advising life science companies. Mr Goryachev assists with IP enforcement and antipiracy matters, and handles all kinds of IP infringement cases before the courts and administrative bodies. He is the author of several articles on IP and commercial law issues and speaks English and French.