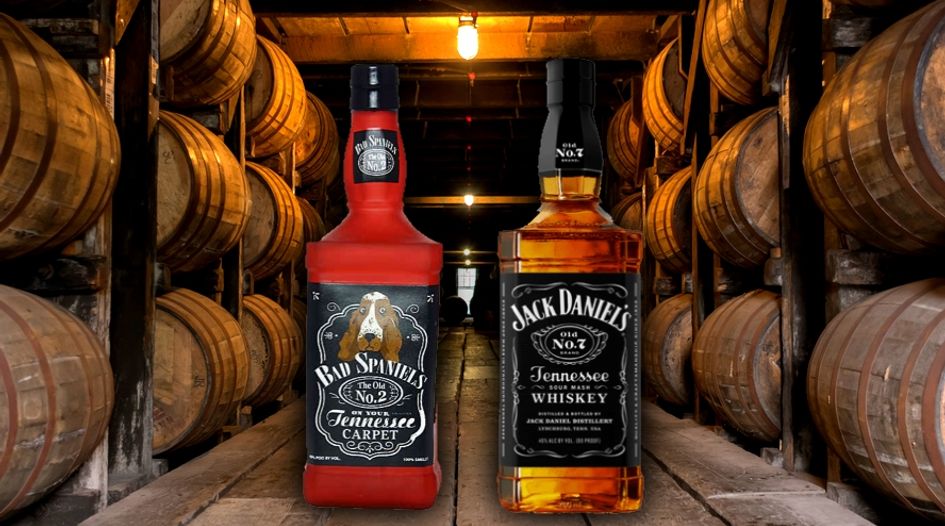 In VIP Products LLC v Jack Daniel’s Properties Inc, the US Court of Appeals for the Ninth Circuit has held that a dog toy meant to humorously evoke a bottle of whiskey was a protectable expressive work. In this guest post, Christian W Liedtke, partner at acuminis and co-author of an amicus brief submitted by INTA seeking en banc review of the decision, argues that the ruling, as it presently stands, is alarming and opens the floodgates to widespread theft of goodwill under the guise of the First Amendment.

VIP Products LLC v Jack Daniel’s Properties (18-16012 (9th Cir 31 March 2020)) is a case between VIP Products, one of the largest makers of dog toys and other pet accessories in the United States, and defendant Jack Daniel’s Properties, operator of the oldest whiskey distillery in the United States and owner of trademarks and trade dress appearing on Jack Daniel’s Tennessee whiskey. While the parties’ respective businesses could scarcely appear more different on the surface, they intersected thanks to a dog toy sold by VIP as the “Bad Spaniels Silly Squeaker”.

It should be noted that, on the back of the packaging for the Bad Spaniels Silly Squeaker toy, it states: “This product is not affiliated with Jack Daniel’s.” An image of the bottle toy adjacent to a Jack Daniel’s bottle is reprinted below. 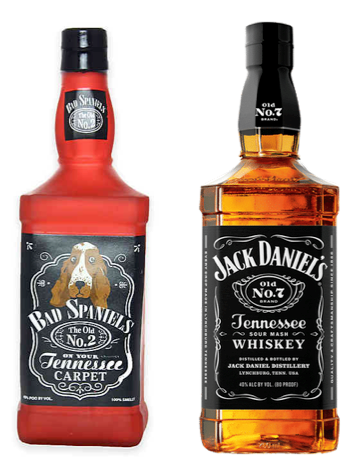 In addition, VIP sought cancellation of the Jack Daniel’s USPTO registration for the configuration and shape of its whiskey bottle.

The parties cross moved for summary judgment. In its motion, VIP argued that the infringement and dilution claims should be dismissed in light of its defences of nominative and First Amendment fair use. VIP further argued that, even without those defences, Jack Daniel’s could not prove its dilution claims or that the JACK DANIEL’S trademarks and trade dress were functional and/or non-distinctive.

In response to VIP’s motion, Jack Daniel’s argued that the fair-use defences were inapplicable. Jack Daniel’s further argued that its trade dress was non-functional and distinctive as a matter of law, and urged the District Court to leave for trial its dilution claims.

The District Court rejected VIP’s attempt to rely on a First Amendment fair-use defence by concluding that the Bad Spaniels Silly Squeaker toy was not an “expressive work”. Notably, the Ninth Circuit has utilised the phrase “expressive works” instead of “artistic works” since Brown v Electronic Arts, Inc (724 F.3d 1235, 1241 (9th Cir 2013)). In rejecting VIP’s defence, the District Court applied the Rogers test, first articulated by the Second Circuit in Rogers v Grimaldi (875 F.2d 994 (2d Cir 1989). As interpreted by the District Court, the Rogers test applies to artistic or expressive works such as movies, plays, books and songs, and “requires courts to construe trademark law only where the public interest in avoiding consumer confusion outweighs the public interest in free expression”. The District Court determined that “the First Amendment affords no protection to VIP because it is trademark law that regulates misleading commercial speech where another’s trademark is used for source identification in a way likely to cause consumer confusion”.

In its analysis, the District Court compared the case to a 2002 case from the Southern District of New York, Tommy Hilfiger Licensing v Nature Labs (221 F Supp 2d 410 (SDNY 2002)). In Tommy Hilfiger, First Amendment protections were determined not to apply to Timmy Holedigger, a dog perfume designed to be a parody of the TOMMY HILFIGER trademark, because Tommy Holedigger was meant, at least in part, “to promote a somewhat non-expressive, commercial product”.

The case between VIP and Jack Daniel’s continued to trial. At the end of a four-day bench trial, the District Court ruled for Jack Daniel’s and issued a permanent injunction enjoining VIP from manufacturing and selling the Bad Spaniels Silly Squeaker toy.

On 22 April 2020, INTA filed an amicus curiae brief in support of the Jack Daniel’s request for en banc review of this case centered around two arguments. First, INTA highlights that the Ninth Circuit’s application of the Rogers doctrine to commercial goods is unprecedented. Second, it argues that the Ninth Circuit failed to apply the precedent set by the Supreme Court in Bolger v Youngs Drugs Prods Corp (463 US at 66-67) when making its determination that the Bad Spaniels toy constituted non-commercial use.

The Ninth Circuit’s decision, as it presently stands, is alarming and goes beyond allowing dogs to do their business all over brand equity; it opens the floodgates to widespread theft of goodwill under the guise of the First Amendment.