Every Tuesday and Friday, World Trademark Review presents a round-up of news, developments and insights from across the trademark sphere. In our latest edition, we look at Alibaba and Kantar teaming up to redefine brand building in China, how the trademark in fake Italian goods costs Italy billions, Ukraine developing an institution of IP inspectors, and a hip-hop artist has been ordered to pay $2 million for infringing on an independent rapper’s trademark. Coverage this time from Trevor Little (TL), Tim Lince (TJL) and Timothy Au (TA).

‘Mastermind’ hip-hop artist loses $2 million trademark infringement suit – Hip-hop artist Rick Ross has been ordered to pay $2 million for infringing independent rapper Raul Caiz’s trademark for the name ‘Mastermind’, as reported by AceShowbiz. Caiz initiated the lawsuit for trademark infringement, unjust enrichment and misappropriation back in 2015, claiming that Ross had been using the name to refer to himself since 2013 (his sixth studio album was also titled Mastermind). Caiz had been using the same moniker to refer to himself for the prior 17 years. In 2016, after Ross launched a countersuit, the case was dismissed and Caiz’s trademark was cancelled, ruling that consumers would not associate ‘Mastermind’ with him. However, in the latest development, Caiz has secured a victory on appeal and been awarded the $2 million in damages. (TA)

Cuba issues consumer protection rules – A release from the Global Advertising Lawyers Alliance has highlighted the Cuban Ministry of the Interior’s enactment of the country’s first specific consumer protection rules. The rules, which impact all aspects of commercial trade (including e-commerce), are designed to protect consumers against false or misleading commercial advertising and unfair practices. The new rules provide financial penalties for failure to comply. "As more businesses expand their marketing into Cuba, it's critical that they comply with Cuba's emerging consumer protection rules," observes GALA chairman, and managing partner of Frankfurt Kurnit, Jeffrey A Greenbaum. (TL)

Ukraine to create institute of IP inspectors – According to Open4Business, the Economic Development and Trade Ministry of Ukraine has announced the creation of an institution of public IP inspectors. The decision was made on June 14, and the inspectors will “have the right to conduct scheduled and unscheduled inspections to identify violations in the field of intellectual property”, as well as “bringing infringers to administrative responsibility – through registration of administrative protocols and sending them to court”. Funding for this institute of IP inspectors will be from the penalties from IP infringements. The ministry noted in announcing this step that it was spurred by the results from the recent Special Report 301 from the US Trade Representative. Work to create this institute will begin from August 20 2018. (TJL)

McGregor continues to battle it out in the trademark arena – We have previously reported on mixed martial artist Conor McGregor’s attempts to trademark a series of words and phrases associated with his name, which have faced numerous oppositions, including from MAC Cosmetics, clothing manufacturer Mac Jeans and retail giant Migros. It has now been reported by the Irish Times that the Crumlin fighter is at it again outside of the Octagon, having applied for the term THE GREEN BACK at the EUIPO. However, as the Irish Times notes, he may encounter difficulties in getting the term registered as the phrase is also a common slang term for US dollars. Additionally, he has filed for the mark McGREGOR F.A.S.T. for a training programme associated with him. (TA)

Alibaba and Kantar launch new partnership to redefine brand building in China – It has been announced that Alibaba Group and consultancy group Kantar have established a partnership to redefine brand building in China by creating a new platform to help marketing executives realise their real-time brand and campaign management goals. Given the scope and speed at which the Chinese consumer market and media is transforming, many Chinese and international brands have seen their marketing strategies fall by the wayside. As such, Alibaba Group is combining its brand insights and understanding of active Chinese mobile consumers with Kantar’s IP and marketing data solutions to help brands move at ‘China-speed’. Three integrated and real-time measurement solutions were announced, slated for Q3 2018: Brand Measurement & Diagnosis; Brand Activation Guidance & Planning; and Performance Measurement & Optimisation. Commenting on the announcement, Eric Salam, CEO of Kantar, stated that the new platform will be “a positive disrupter for the Chinese marketing landscape”. (TA)

Trade in fake Italian goods costs economy billions – The global trade in fake Italian goods, such as luxury handbags, watches, foodstuffs and car parts, is hitting the Italian economy for equivalent to around 1-2% of GDP in terms of lost sales, according to a new OECD report. The study estimates the total value of counterfeit and pirated Italian goods sold worldwide at over €35 billion euros in 2013, equivalent to 4.9% of global Italian manufacturing sales. This resulted in over €25 billion euros in lost sales by Italian companies in a year when Italy’s GDP was €1.6 trillion euros. (TL)

Facebook opens up matchmaking service for brands and creators – Facebook has announced the launch of a number of new monetisation features for its creator community, including a ‘Brand Collabs Manager’ that aims to foster partnerships between brands and video creators. The company states: “The Brands Collabs Manager lets brands search and find creators to potentially establish deals and partnerships with. We’ve been testing this with a limited set of partners, and will now be opening up more broadly.” In a drive to compete with other video platform rivals, the company also announced that creators will be able to run ad breaks and offer subscription fees. In a comment to Reuters, Facebook’s vice president Fidji Simo stated that the company would not keep a cut of partnerships or subscriptions during testing and it is uncertain about eventual fees. (TA)

TrademarkVision launches 3D image tech offering – TrademarkVision has released its visual search technology for 3D design patents in the US. DesignVision is already being used by the EUIPO, the company stating that the product saves “countless hours of clearance or infringement searching” when seeking to protect design patents. With US designs data now integrated, the image search product, claims the company, will simplify the search process, noting: “In the past, searching through U.S. patented designs to ensure a new design didn't infringe on anyone's rights would require significant subjectivity and the need to sift through thousands of designs based on searching with text descriptions, sometimes resulting in human error and almost always in lost time.” (TL)

IHOP name change “was a flop” – The NYPost has claimed that IHOP’s recent IHOB viral marketing stunt was a “flop”, according to new data. “Buzz alone does not make a cash register ring,” the articles states. “Interest in dining at IHOP has remained relatively unchanged, according to YouGov BrandIndex.” During the week of the rebrand, we wrote about how such stunts “are not suitable for all companies, with many critical trademark dimensions to be considered” – and if this latest data is true, and it led to little tangible change in brand interest, then perhaps it’s not advised even outside of the trademark perspective. (TJL)

Cost of changing Swaziland to Kingdom of eSwatini – The BBC has reported on “the cost of changing a country’s name”, focusing on the recent announcement that Swaziland will officially be known as the Kingdom of eSwatini. But the name change won’t necessarily be as easy as you may think. One of those interviewed in the article is IP lawyer and AfroIP writer Darren Olivier, who wrote back in April that he predicts the “country rebrand” could cost around $6 million. Responding to that significant figure, Jeremy Sampson, executive director for Africa at marketing firm Brand Finance, told the BBC that isn’t necessarily surprising: “The paperwork, the website, signage on government properties, government agencies – there’s a huge, huge expenditure here and one’s got to ask right at the beginning is this really necessary.” The article shows, perhaps, why country name changes are so rare (other than for the obvious reasons of maintaining heritage and tradition) – the sheer expense can be huge and there are numerous other potential issues to contend with. (TJL)

German court to revisit ICANN injunction request – Last week we reported that ICANN was appealing the decision not to issue an injunction it requested against EPAG, a Germany-based registrar that is part of the Tucows Group. The initial request was a response to EPAG’s announcement that it will no longer collect administrative and technical contact information, as it believes collection of that data would violate GDPR rules (ICANN requires this information to be collected). After the request was not granted, ICANN appealed, asking Germany’s Higher Regional Court to require EPAG to reinstate the collection of all WHOIS data required under EPAG’s Registrar Accreditation Agreement. Yesterday ICANN was informed that the Regional Court in Bonn, Germany, has decided to revisit its ruling. ICANN’s bid to receive court assistance in interpreting the European Union General Data Protection Regulation (GDPR) as it relates to WHOIS remains alive and kicking. (TL)

Goodwin hires four from Greenberg Traurig – Law firm Goodwin Procter has announced the hiring of a four-person IP team from Greenberg Traurig. Specifically, Mark Davis, PJ McCarthy, Ronald Pabis and Stephen Shahida have all joined the firm as partners in its Washington DC office. The four will focus their efforts on IP litigation in the technology sector. In the announcement, Goodwin's IP practice chair Douglas Kline said: “We have built a destination IP practice that represents innovative life sciences and technology companies. Widely recognized as industry-leading practitioners, Mark, PJ, Ronald and Stephen join Goodwin as we continue to see strong demand for our services from technology clients. We are delighted to welcome them to the Goodwin partnership.” (TJL) 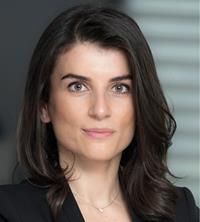