In Sartorius Lab Instruments GmbH & Co KG v Office for Harmonisation in the Internal Market (OHIM) (Case T-331/12), the General Court has confirmed a decision of the First Board of Appeal of OHIM finding that the Community trademark (CTM) application for the following mark was devoid of any distinctive character: 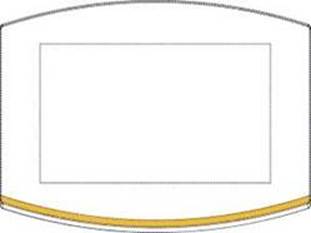 On February 7 2011 Sartorius Lab Instruments GmbH & Co KG applied for a position mark consisting of an upwards open yellow arc, which is placed at the bottom of an electronic display unit and extends over its entire width. The dashed contours shown in the application served to identify the location of the arc and were not the subject of the application. The mark was filed for various goods in Classes 7, 9, 10 and 11 of the Nice Classification, all in connection with "an electronic screen”.

The mark was refused by both the examiner and the First Board of Appeal, and Satorius appealed to the General Court. In the first part of its plea, Sartorius criticised the Board of Appeal insofar as it had reassessed the examiner’s findings with regard to the level of attention of the relevant public, even though these were not disputed by the parties. In the second part of the plea, Sartorius disputed the board's finding that the position mark was devoid of distinctive character. The General Court dismissed both arguments.

With regard to the first part of the plea, the General Court reasoned that, according to Article 64(1) of the Community Trademark Regulation (207/2009), the Board of Appeal may "exercise any power within the competence of the department which was responsible for the decision appealed". Under this provision, the Board of Appeal, due to the effect of an appeal against a decision of the examiner refusing an application, is permitted to perform a new and full examination, in law and in fact, of the application itself, and decide to reject or approve the application in its entirety. As a consequence, the Board of Appeal was allowed to determine the relevant public and comment on its level of attention with regard to the goods in question. Within this context, the General Court reiterated that the same principle applies to the assessment of the distinctive character of the mark.

In connection with the second part of Sartorius’ plea, the General Court stated that it is clear from the wording of Article 7(1)(b) of the regulation that a minimum degree of distinctive character is sufficient to render the ground for refusal set out in that article inapplicable. The perception of the relevant public, however, can be influenced by the nature of the sign. It was therefore appropriate to conclude that the perception of the average consumer is not necessarily the same in relation to a position mark consisting of a figurative sign (ie, the base mark) and its position on the product itself, as it is in relation to a word or figurative mark consisting of a sign which is independent of the appearance of the products it denotes. While the public is accustomed to perceiving word or figurative marks instantly as signs identifying the commercial origin of the goods, the same is not necessarily true for position marks. Consumers are not in the habit of making assumptions about the origin of goods based on the position of a figurative sign on the product - as a rule, the position of a figurative sign is not, in current commercial practice, used as a means of identification.

In those circumstances, only a mark which departs significantly from the norm or customs of the sector, and thereby fulfils the essential function of indicating origin, is not devoid of any distinctive character for the purposes of Article 7(1)(b) of the regulation. In order to achieve such minimum degree of distinctiveness, the mark must be a priori capable of enabling the relevant public to identify the origin of the goods covered by the trademark application and to distinguish them from those of other undertakings. In other words, the test is whether the relevant public will perceive the base mark in its specific position on the product as an indication of origin.

In the present case, the General Court concluded that the sign did not contain any characteristic, formative or eye-catching elements that could give it the required minimum degree of distinctiveness; consumers would perceive it as any other ordinary decoration on an electronic display unit for goods in Classes 7, 9, 10 and 11. In particular, the court argued that the introduction of a colour element on an electronic display unit, be it on the buttons next to the unit or on the frame of the unit itself, would not be perceived by the public as unusual - especially in light of the fact that another manufacturer uses four bright, yellow curved lines that run diagonally across the electronic display unit. Therefore, consumers are used to seeing coloured elements on the goods covered by the application, and would thus regard them as decorative elements and not as an indication of the commercial origin of the products.

The General Court nevertheless acknowledged that a position mark can become distinctive in accordance with Article 7(3) of the regulation as a consequence of the use which has been made of it.

This decision is largely in line with the Community case law on position marks. A similar argumentation can be found, for example, in Lange Uhren GmbH v OHIM (Case T-152/07) (geometric shapes on a watch face), X Technology Swiss GmbH v OHIM (Cases T-547/08 and C-429/10) (orange colouring of the toe of a sock) and Margarete Steiff GmbH v OHIM (Cases T-433/12 and T-434/12) (round button in the ear of a stuffed toy).

It follows from the foregoing that applications for a position mark under Article 7(1)(b) should be prepared carefully. This concerns in particular the specific - pictorial and linguistic - representation of the two elements (ie, the base sign and its position on the product itself) to be protected. Depending on the base mark, its position and the goods at issue, the chances of obtaining a trademark registration vary widely. In addition, prior to filing the application, applicants are advised to evaluate whether the relevant public will perceive the position mark in question as an indication of origin, and not as a decorative sign. If that mark has been in use as an indication of origin and there is evidence that the public perceives it as such, the applicant has the option of filing an application under Article 7(3) of the regulation instead.