In Magmatic Ltd v PMS International Ltd ([2014] EWCA Civ 181), the makers of the Trunki ride-on child suitcase have had their first instance victory at the UK High Court for design infringement overturned by the Court of Appeal, which held that the rival Kiddee Case did not infringe their Community registered design (CRD).

Magmatic is the designer and maker of the Trunki ride-on suitcase, which anyone with young children or frequenters of airports and train stations will have likely encountered. Magmatic was granted a CRD for the Trunki in 2003. The CRD consists of six monochrome (ie, black and white) representations of the exterior of the case from different angles and perspectives. The handles and clasps of the design give the appearance of an animal with a tail and horns or ears.

PMS International produces the Kiddee Case, a similar ride-on child suitcase but sold at a discount price. PMS' marketing director had freely admitted that he had been directly inspired by the Trunki and had formed the view that there was a gap in the market for a discount version. The Kiddee Case also has a similar zoological appearance and is sold in two versions - an 'animal' version with handles to look like ears and an 'insect' version with handles to look like antennae. These versions are painted with graphic designs representing various creatures, notably a tiger, ladybird, sheep, cow and pig.

The CRD and the Trunki suitcase as marketed: 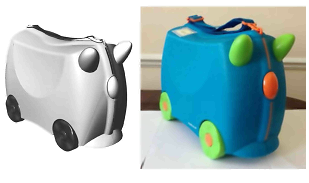 The tiger and ladybird Kiddee Case: 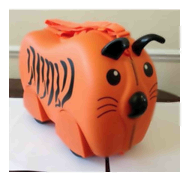 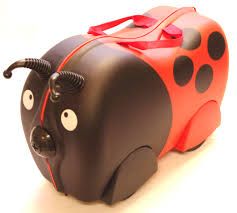 PMS appealed on the basis that Arnold J had erred in principle, wrongly assessing the overall impression created by the Kiddee Case by not taking into account the surface decoration.

The Court of Appeal agreed. Kitchin LJ (giving the leading judgment) believed that Arnold J had erred in two respects in interpreting the CRD:

Kitchin LJ referred to two Court of Appeal cases, Procter & Gamble Co v Reckitt Benckiser (UK) Ltd ([2007] EWCA CIV 936) and Samsung Electronics (UK) Ltd v Apple Inc ([2012] EWCA Civ 1339). Procter held that the proper comparison of a CRD should be with the shape of the alleged infringement and graphics on that are irrelevant. Kitchin LJ distinguished this ruling on the basis that it did not prevent assessment on colour contrast when such contrast was present in the CRD. Samsung held that surface ornamentation could be taken into account when considering the overall impression. Specifically, it was considered a relevant (if relatively small) difference that present on Samsung's product (the Galaxy tablet) was the Samsung trademark, whereas Apple's CRD (for the iPad) contained no ornamentation (and Apple had argued as such). Kitchin LJ believed there was no inconsistency between these decisions.

Having concluded that Arnold J had erred in principle, the Court of Appeal was then free to form its own view on infringement. Considering the two designs, Kitchin LJ held that the decoration of the Kiddee Case "significantly affected how its shape strikes the eye", and thus the overall impression made. Crucially, the Kiddee Case design did not look like a 'horned animal' (the impression created by the Trunki CRD). The overall impression of the 'insect' Kiddee Case created was influenced by the two-tone colouring of the body, the spots and the handles on the forehead which looked like antennae. As a result, it resembled a ladybird. Likewise for the 'animal' version, the stripes and whiskers and the handles which looked like ears gave the impression that it was a tiger.

Further, the colour contrast between the wheels and body was also considered a striking feature of the CRD not present in the Kiddee Case. Kitchin LJ held that this colour contrast was not merely an artefact of the computer generation process of the CRD representation, but an intentional aspect of the design.

The judgment raises interesting points of law when assessing the overall impression of CRDs, in particular the extent to which surface ornamentation and colour contrast should be taken into account. Yet these may be points on which Magmatic will appeal to the Supreme Court (and press reports indicate that it has decided to do so). Notably, Kitchin LJ's ruling does appear to sit uneasily against Procter & Gamble; and Samsung may be distinguished on the basis that Apple had specifically relied on the fact that a key feature of the iPad design was no ornamentation (and so any ornamentation on an allegedly infringing product would be a departure), whereas the same could not be said of the Trunki CRD.

A further controversial aspect of the judgment lies in the way that PMS' design was clearly intended to resemble the Trunki as closely as possible, despite the Court of Appeal acknowledging that there was substantial design freedom in the case. In light of this, criticism can be levelled at the way Kitchin LJ held that there was sufficient difference between a 'horned animal' and the other animals embodied by the Kiddee Case. Given the design freedom available to PMS, it could have designed its product like a vehicle or something else that was not an animal.

As it stands, this ruling could in theory allow for avoidance of design infringement by adding surface decoration to an otherwise infringing product. This is something which could have implications for small businesses trying to prevent copycat products.

The judgment may also affect how a CRD representation is registered. CRD registrants should be careful to ensure that when representations are in 3D monochrome, any distinct colour contrasts between black and white on different components of the representation are intentional and not merely part of the computer generation process. It may be safer to register line drawings, although if the representation is not detailed enough it could risk the CRD's validity.

Since being constituted in 2009, the UK Supreme Court has yet to hear a designs case, making Magmatic the first should an appeal be successfully granted. It will then be very interesting to hear what guidance the Supreme Court provides and which party gets sent packing.