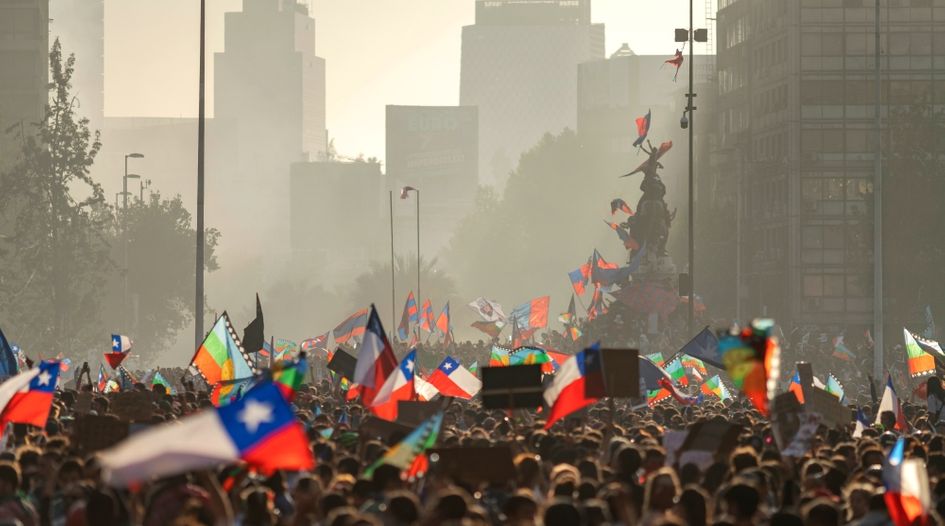 The Intellectual Property Office of Chile (INAPI) has re-opened to customers after its headquarters suffered devastating damage from protesters. Talking to WTR, national director Loreto Bresky explains that the registry’s innovative digital tools meant that, for the most part, users were unaffected by the attack.

For the past few months, nationwide protests have been taking place regularly across Chile following public anger at rising living costs and income inequality in the country. In October, the Chilean government announced a state of emergency in several cities following violent clashes, looting and arson attacks. This unrest caused the INAPI to extend deadlines for all administrative procedures to, as the registry described, “facilitate the processing of users who have been affected by recent events in the country”.

As the new year arrived, protests kicked off again in capital city Santiago to commemorate the 26 people who had been killed during the ongoing demonstrations. It was during these latest protests that the headquarters of the INAPI was targeted. It is understood that demonstrators broke into the building on 3 January, and proceeded to destroy furniture, windows and electronic equipment on the first two floors. Furthermore, fireswere started that caused irreparable damage to parts of each floor. A photo of the damage illustrates the sheer devastation caused.

Following the attack, INAPI immediately suspended all face-to-face services with users, and urged customers to use the registry’s online tools instead. Two days later, the registry extended deadlines for various administrative procedures due to the serious damage the headquarters had suffered.

Asked by WTR about the impact of the attack, INAPI national director Loreto Bresky revealed that the two floors were particularly important for key office operations. “The affected areas were very sensitive for our operations because they were places destined for the face-to-face attention of our users, mainly in the matter of document reception and specialised advice on trademarks and patents. Furthermore, the archives office was also seriously damaged,” she said. “However, thanks to our continuous improvement processes, we have managed to deal with this contingency in a very efficient way, based on two lines of work: staff safety and operational continuity.”

Positively, the registry resumed face-to-face services this week by setting up a temporary office on the 13th floor of its building. Responding to this latest development, Bresky said: “Considering the magnitude of the damage, I am proud to be able to continue the service, thanks to the entire INAPI team. We will continue working to ensure the quality of our services and overcome this painful moment that we have faced as an institution.”

There are two key reasons that the INAPI was able to recover so quickly, Bresky tells us: “We were able to protect the officials that make up the INAPI team in a timely manner. Before the social unrest, 35% of our people already worked from their homes thanks to our successful telecommuting program, a pioneer in the state. Therefore, this installed capacity allowed us to extend the benefit and avoid exposure during the days of debris removal. Furthermore, in terms of operational continuity, for two years all of our procedures can be carried out remotely due to our online processing platform. In 2019, 89% of trademark and patent filings were made electronically. Therefore, after the attack on the building, users were able to continue accessing our services.”

For that reason, local trademark practitioners have praised INAPI’s handling of the situation. “They have kept constant information of developments and have issued pertinent resolutions and instructions allowing the extension of terms due to force majeure and administrative measures to prevent users from being affected by these events,” Alfredo Montaner, partner at Sargent & Krahn, tells WTR.

On top of that, some law firms are helping the registry recover documents lost in the attack. “INAPI has reported the loss of some documents as a result of these fires, and have contacted law firms in order to request them to submit any lost documents,” Francisco Silva, partner at Silva, told us. “I believe all problems will be solved since I have no doubt about the excellence in service provided by INAPI. They have been very successful in the past months considering the situation we are living. All procedures have been running perfectly well, and the registry has been an example for all Chilean public institutions.”