Energy Brands sought to register a trademark consisting of depictions of the configuration of a bottle bearing the wording 'vitaminwater': 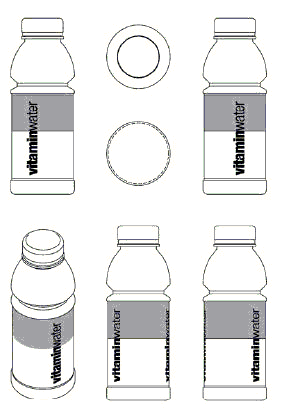 Registration was sought in Class 32 of the Nice Classification for non-alcoholic beverages, including water, flavoured water and energy drinks.

The examiner refused to register the mark, arguing that it was a three-dimensional (3D) mark which lacked distinctive character. The applicant argued that the mark was a two-dimensional (2D) mark, but reserved its right to argue that it was a 3D mark. It asserted that the mark possessed inherent distinctiveness due to its unusual shape and design. Further, the applicant argued that, while the product was not marketed in Israel, the shape had acquired distinctiveness through extensive global use and advertising, to which Israeli consumers were exposed when travelling abroad and browsing the Internet.

The registrar ruled that the mark at issue was not an unusual bottle shape and, therefore, it lacked inherent distinctiveness. As to acquired distinctiveness, the registrar held that, although Israeli consumers may be exposed to global marketing campaigns, the applicant had not shown any connection between its advertising abroad and the Israeli public, and thus had failed to demonstrate that the mark had acquired a secondary meaning in Israel.

Accordingly, the mark was refused registration.