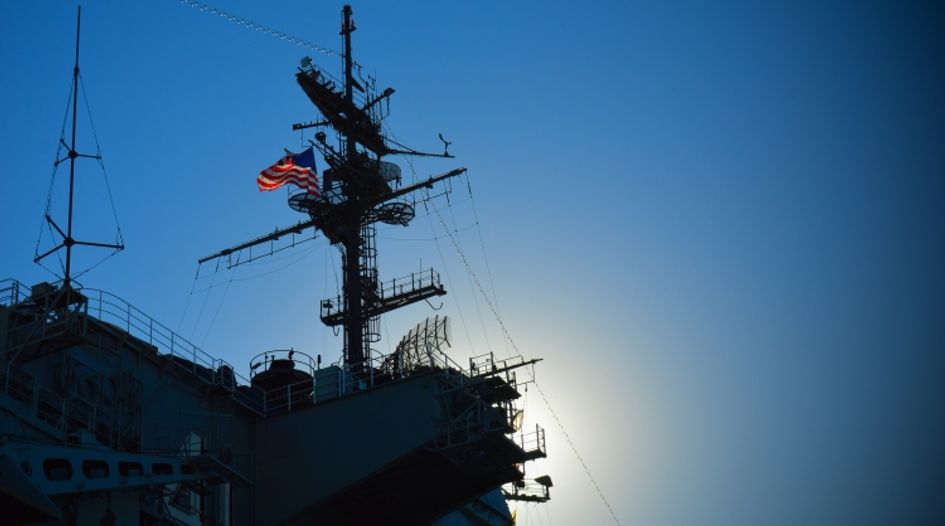 Every Tuesday and Friday, WTR presents a round-up of news, developments and insights from across the trademark sphere. In our latest edition, we look at a German fashion designer who is ‘naming and shaming’ the buyers of counterfeits, Japan deciding to ban trademark registrations for era names, Georgia celebrating its 100,000th trademark application, the Maasai tribe seeking to control and monetise its cultural brands, Ivanka Trump trademarks, and much more. Coverage this time from Trevor Little (TL), Adam Houldsworth (AH), Bridget Diakun (BD) and Tim Lince (TJL).

US Navy transfer trademark licensing money to morale program – The US Navy has announced that, for the first time, it has transferred more than $1.3 million to the Navy’s Morale, Welfare and Recreation (MWR) program, a quality-of-life program for sailors and their families. The money was gained from royalties collected through the licensed use of the Navy’s logos, with Nadine Villanueva Santiago, manager of the Navy’s Trademark Licensing Office (NTLO), explaining in the release that such money-raising is only done when deemed appropriate. “Our job is to ensure that Navy-branded consumer goods available in the marketplace are ones that instill pride in the service and admiration for the men and women who serve,” she explained. “If you buy an officially licensed product, you can guarantee that it’s been vetted and gone through the appropriate channels to ensure the item is of good quality and is not made in a sweatshop or factory with safety violations. Plus, you can feel good that a portion of the proceeds go back to the Navy through the MWR program.” As well as the MWR program, the press release adds that the licensing money also goes towards the US Navy’s Wounded Warrior-Safe Harbor program. On top of that, other branches of the US military pay into similar programmes; in all, the US Department of Defense trademark offices have transferred over $24 million to MWR programmes. (TJL)

Japan to ban trademark registration for era names – The current era name in Japan will change next May, and in preparation the Japanese government is altering the trademark application system to ensure that no era names can be registered, as reported by The Japan Times. An era name identifies years in the Japanese era calendar scheme, and while it was allowed to apply for past era names, this will no longer be the case. The exceptions to this is “existing well-known trademarks and combinations with proper nouns”. Although the government is set to update the current guidelines in February, the Japan Patent Office is already in the habit of refusing trademarks which use past era names. (BD)

Amazon sellers roped into USPTO hacker ordeal – WTR previously reported on the occurrences of unauthorised changes to USPTO’s applications and registrations, and this corruption continues. Bloomberg Law recently published an article stating that ‘rogue users are exploiting an Amazon.com Inc brand registry’ by breaking into the USPTO’s database to pose as the rightful trademark owners. Amazon had been emailing out authentication codes to those with registered trademark numbers so these companies could sell their verified products online. Those hacking into the system are able to change the business’s email address to receive the authentication codes, thus making fake foods appear to be trademarked products on the Amazon site. According to the article, ‘the PTO reported a more than 11,000 percent spike in suspected of confirmed trademark correspondence fraud over the past four months’. The need to address these breaches of security is increasing as it continuously puts rights holders at risk. (BD)

More Ivanka Trump’s trademarks approved in China – 16 trademarks registered for Ivanka Trump’s fashion brand have been granted initial approval by China, as reported by Reuters. These marks cover shoes and jewelry, as well as voting machines and nursing homes. Ivanka Trump had closed down her fashion line in July of this year to focus on her informal political role, and it is noted that these marks were applied for in 2016. The Trump family had come under criticism when Donald Trump was elected for the number of businesses which used the Trump name, as it conflicted with White House responsibilities. These approvals come at an interesting time when China and the United States are engaged in a heated trade war. (BD)

German fashion designer “names and shames” buyers of counterfeits – Designer Philipp Plein has taken an unorthodox approach to trademark enforcement, using his Instagram account to name and shame consumers he accuses of buying knock-off versions of his designs, according The Fashion Law. This has even involved personal insults, with one buyer being called “fat” and a seller being told to “F**K OFF”. Plein’s Instagram account says that “everybody who buys, produces or sells fakes will be targeted”, and that over 1 million fake items have been seized in the past 12 months. The designer’s website states: “As a general rule, consumers must always be vigilant in searching a website before placing an order online, as a way to safeguard and protect themselves and the brand of interest.” It also invites owners of counterfeit goods to ship them to the designer in order to get a 20% discount on the site. The question, then, is whether this direct, insulting message to counterfeit consumer is an effective one in the long-term. (AH)

Pinduoduo attracting brands – Back in August, we reported on Chinese e-commerce platform Pinduoduo being criticised and subsequently investigated by China’s State Administration for Market Regulation following allegations that the site is involved in the sale of counterfeit goods. For example, in 2017 alone it took down 11 million suspicious listings. However, despite pushback for the alleged counterfeit problem, it appears brands are jumping on board with Pinduoduo. According to China Knowledge, the platform has been doubling-down on the sale of authentic branded goods to get away from claims of selling fakes. To date, it has attracted more than 500 domestic and foreign brands, including Gome, Xiaomi and Dangdang. The platform is clearly becoming a major shopping hub in China; according to sales figures, over 120,000 new iPhones were sold on the website in recent weeks. This development, then, suggests that brands are willing to work with the platform, even with criticism about the number of fakes listed on it. (TJL)

Lego prevails (again) in China – Lego has won an IP lawsuit in China related to a local company producing building blocks under the LEPIN brand. According to Bloomberg, the Guangzhou Yuexiu District Court ruled that production of the LEPIN product should be ceased immediately and that Lego should be paid damages of 4.5 million yuan ($650,000). Lego had a similar victory in China earlier in the year, suggesting the brand is having good luck when it comes to tackling infringers in the country. (TJL)

Georgia celebrates 100,000th trademark application – The Georgian IP office (Sakpatenti) has posted that, on October 24, the 100,000th trademark application was filed to the registry via its electronic system. According to the office, the number “emphasises the popularity of the trademark as the intellectual property object and the value of the business sector”, adding: “Such an increasing number of applications also contributed to the active steps taken by Sakpatenti to improve the working process standards and raise public awareness.” (TJL)

Maasai tribe seeks to control and monetise its cultural brand – The Fashion Law this week published a blog exploring the efforts of Kenyan and Tanzanian cultural group, the MaasaI, to claim rights to its “cultural brand”. Several fashions inspired by Maasai culture have featured on the catwalk over the years, the blog points out, including Kim Jones’ debut collection for Louis Vuitton in June 2011. Calvin Klein, Ralph Lauren and Diane Furstenberg have also sold products bearing the group’s well-known patterns and beadwork. These uses, however, have not enjoyed the permission of the Maasai, whose representatives have in recent years been campaigning to have trademarks relating to their “cultural brand” transferred to them in return for licensing agreements. They seem to have the support of the Kenyan authorities, the blog points out. Marisella Ouma, former executive director of the Kenya Copyright Board, told an international conference in 2015 that the group’s cultural heritage was not part of the public domain and “should be recognised as part of intellectual property.” And, while there are legal difficulties to be overcome when it comes to claiming trademark rights, the Maasai IP Initiative sealed its first licensing deal with UK-based fashion brand Koy Clothing earlier this year. Talking to WTR about that deal, Ron Layton, who campaigns for the Maasai, said that it puts a “stake in the ground” and will hopefully encourage other fashion houses to follow suit. While the legal case for trademark rights may be lacking in many cases, he conceded, “The thing is not as black and white as lawyers seem to think… when it comes to cultural tribes, they have an awful lot of people supporting them... The Maasai can mobilise a lot of interest in a case.” (AH)

John Mansell heads to Catalyst IP – According to a press release from Catalyst IP, John Mansell has joined as a partner in Auckland. He is a lawyer and patent attorney registered to practice in New Zealand and Australia, with a particular focus on innovation in life sciences.  (BD)

Perkins Coie welcomes Nathan Kelley – Nathan Kelley has joined the IP practice of Perkins Coie as a partner in the Washington DC office, according to a press release by the firm. In his prior role he acted as the solicitor and deputy general counsel for IP law at the USPTO, defending the director of the US office in court. Some of the significant patent and trademark cases he was involved in include  Aqua Products Inc. v Matal, In re Cuozzo Speed Technologies LLC, and Novartis AG v Noven Pharmaceuticals Inc. (BD)

Kirkland & Ellis beefs up its London IP team – Kirkland & Ellis has announced in a press release that IP attorney Nicola Dagg has joined the practice in London, as well as partners Daniel Lim and Katie Coltart and associates Jin Ooi and Steven Baldwin. In commenting on the move, Jeffrey C. Hammes, chairman of Kirkland’s global management executive committee, said: “Nicole, Daniel, Katie, Jin and Steven form a first-class team of litigators with comprehensive experience across the spectrum of IP matters that are important to our clients. They are a perfect match for Kirkland’s premier complex litigation practice, and will expand our IP litigation capabilities in Europe.” (BD)

McNair acquired by Burr & Forman – In a recently-published press release, law firm Burr & Forman has announced that it will acquire Carolinas-based firm McNair, with 84 attorneys joining Burr & Forman effective from January 1 2019. In commenting on the move, Burr & Forman CEO Ed Christian stated: “Combining our resources greatly benefits both firms, growing our footprint into one of the largest firms in the Southeast with a collective portfolio that spans national practices and serves industries that are the cornerstone of our region’s economy.” (BD)