Every Tuesday and Friday, World Trademark Review presents a round-up of news, developments and insights from across the trademark sphere. In our latest edition, we look at how a trademark scammer has rebranded, on Latvia plans to cut back on WHOIS data collection, how India’s anti-counterfeiting efforts are under scrutiny and how a trademark may offer clues on the company that has hit headlines across the world, Cambridge Analytica. Coverage this time from Trevor Little (TL) and Tim Lince (TJL).

Senate confirms customs head – The US Senate has confirmed acting commissioner Kevin McAleenan as head of the US Customs and Border Protection (CBP). The move has been welcomed by the American Apparel & Footwear Association, with president and CEO Rick Helfenbein remarking: “He is a highly qualified individual, with years of valuable experience within CBP, and we are thrilled that he will continue to lead the agency. Imports are essential to the success of the apparel and footwear industry and our ability to employ nearly four million Americans and provide affordable products for American families. CBP is an invaluable partner to our business, both in terms of supporting lawful trade and preventing the import of counterfeit products. We look forward to working with Mr McAleenan and his team for the foreseeable future.” (TL)

Plain packaging proposed for legal marijuana in Canada – Draft regulations published yesterday by Health Canada propose that legal cannabis will be sold in plain packaging with a yellow warning message and “red stop sign” with the silhouette of a marijuana leaf. The only brand element on the packaging will be a company’s name and either a logo or a slogan, with the regulation stating that the logo “may not contain any metallic or fluorescent colours and must be smaller than the stop sign symbol”. According to local media The Star, the regulations follow a consultation which received more than 3,200 online submissions and 450 written responses, as well as input from health and law enforcement experts, governments, and marijuana industry representatives. The move isn’t unsurprising, of course, but is further confirmation that it isn’t just tobacco that could be sold in plain packaging going forward. (TJL)

India’s anti-counterfeiting efforts under scrutiny – India’s counterfeit market is growing steadily amid weak law enforcement regulations, according to the Authentication Solution Providers’ Association. The remarks were made following a two-day anti-counterfeiting and brand protection event organized by the group. ET Now reports that, speaking at the event, commerce minister Suresh Prabhu, stated that the government has been working to curb the trade in counterfeit, and was bullish about the future: "We are going to make a very modern intellectual property rights era in India and that would lead to people investing into the brand and that will lead to a knowledge economy which in turn will make India a far better place and developed place.” Speaking to The Sunday Standard last weekend, INTA CEO Etienne Sanz de Acedo (who was in New Delhi and Mumbai for meetings with IP constituents from the government and industry) noted that the country’s IP office had made progress on its internal operations but added that a focus should now be placed on enforcement efforts. The government has stated that it is focused on facilitating a robust brand protection environment – all eyes will now be on the subsequent follow-up. (TL)

Call for data on Korean counterfeit market – The Korea Herald has been running a series of interviews with IP experts, and on Sunday published the thoughts of Sven-Erik Batenburg, director of legal and international affairs at the European Chamber of Commerce in Korea. The chamber regularly hosts seminar for IP-related enforcement agencies in the country, and was instrumental in inducing the customs authorities to publish a regular report on counterfeit seizures. However, he notes that at present there is not the empirical evidence required to spur further political change, observing: “What Korea tends to lack is a comprehensive study on how counterfeits and other forms of IP violation directly harm its economy.” Such studies require both will and resourcing to undertake, so whether such a  project will be undertaken remains to be seen. (TL)

Trademark scammer rebrands, is quickly called out – Trademark solicitation scams are cropping up with such regularity that they could become a permanent section on our twice-weekly news round-ups. Yesterday details emerged of a letter being sent out by WTRM Inc, accompanied by an invoice for publication of trademark information in a directory (for $980). In reality, this isn’t a new scam. The eagle-eyed Erik Pelton spotted that it is effectively a missive from a rebranded WTMR – a solicitation campaign he previously warned about. Pelton states: “It seems to me that this is clear evidence of an intent to mislead and defraud consumers who own trademark filings with the USPTO. When will the USPTO, Trademark Public Advisory Committee, Fair Trade Commission, Department of Justice, and US Postal Service ramp up any investigations and crack downs on these scams. Of course it is not easy to track the catch those behind these offerings, but is enough being done? Not in my opinion.” As we’ve said before, until these campaigns are meaningfully tackled, brand owners will continue to be duped into paying what look like official office invoices. (TL)

Latvia plans to cut back WHOIS data collection – We have reported previously on top level domain operators that are planning to turn off access to WHOIS data due to enforcement of The General Data Protection Regulation (GDPR). On Domain Incite, Kevin Murphy reports that – in addition to no longer publishing telephone numbers and email addresses – the operators of the ‘.lv’ ccTLD also proposes to collect less data from registrants. With the May 25 date for enforcement of the GDPR looming, it could well be that other TLD operators unveil similar plans in the coming weeks. (TL) 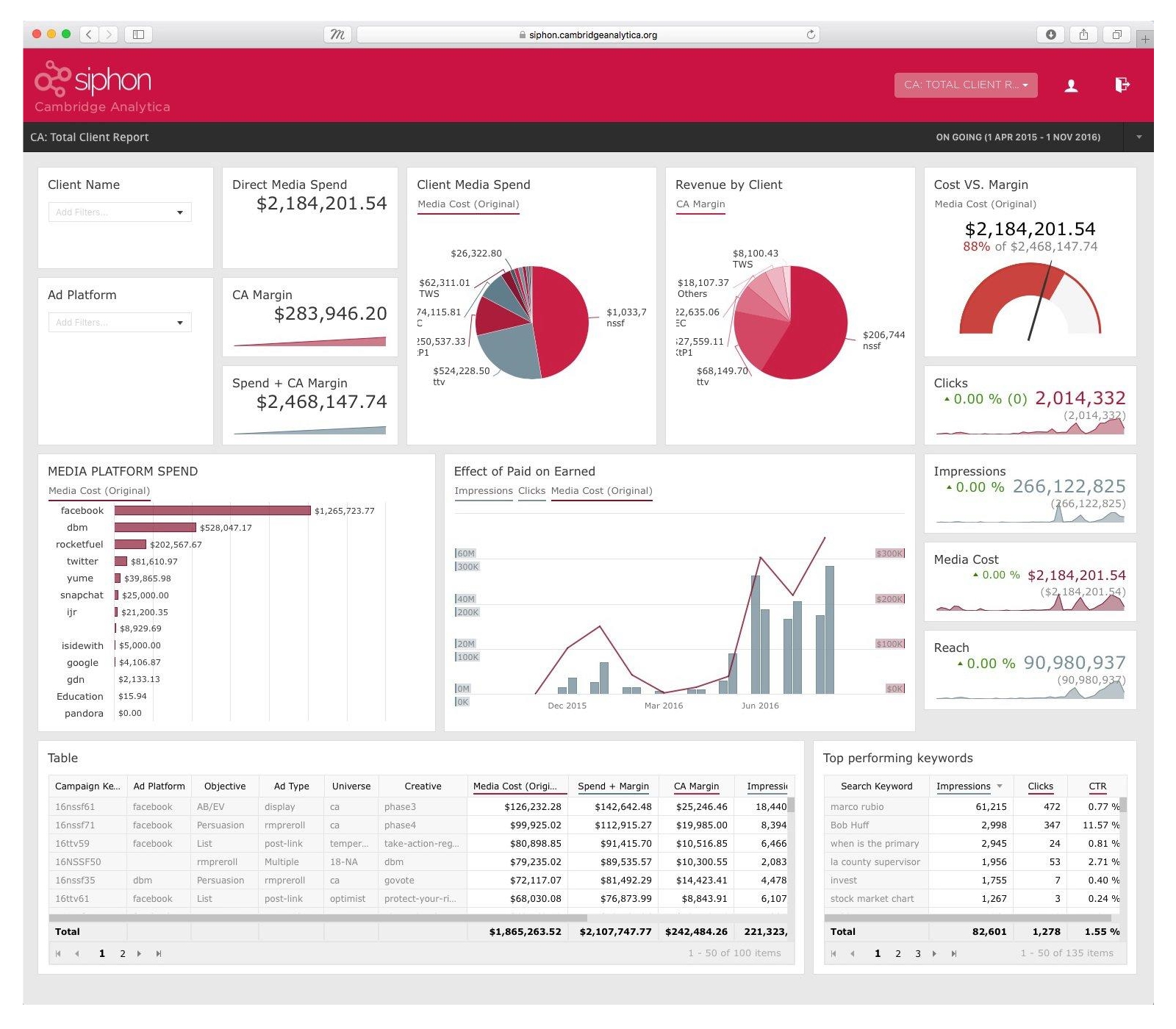 Trademark may offer clues to Cambridge Analytica activity – In the last couple of days, major media outlets have reported on the activities of digital analytics firm Cambridge Analytica. The headlines are over the firm’s harvesting and use of personal data, especially regarding millions of Facebook profiles, and whether that data may have been used to influence the outcome of the US 2016 presidential election or the UK’s Brexit referendum. Many question marks remain, with Cambridge Analytica denying any wrongdoing and UK MPs have demanding that Facebook CEO Mark Zuckerberg explain how his platform may have been breached as part of the campaign. Curiously, an as-yet-unreported trademark application may offer further clues about Cambridge Analytica’s mysterious work. Specifically, is it related to a trademark applications that Cambridge Analytica sent to the USPTO for its company name in 2016. A specimen (pictured, click here to expand) used as part of the application, sent to the USPTO in November 2016, appears to be a screenshot of the media spend, impressions, reach and clicks of activity that Cambridge Analytica undertook from April 2015 to November 2016 (which is, coincidentally, nearly the exact length of US president Donald Trump’s primary and presidential campaign). The trademark specimen seems to confirm that over $2.1 million was spent (including $1.2 million on Facebook and $80,000 on Twitter), with over 266 million impressions served over the time period, and the top performing keyword being “Marco Rubio”. If accurate, the data on the trademark specimen also confirms that Cambridge Analytica’s activity significantly increased from June 2016 onward (ie, when Trump was confirmed as the Republican candidate for US president), as well as possible clues on some of the clients that spent big during that time period (including clients referred to as "nssf", "ttv" and "TWS"). It also shows that the “objective” of many of the campaigns run by the company were cited as “persuasion” – including one Facebook campaign, using the creative “phase4”, that cost nearly $100,000. Overall, the trademark specimen is interesting reading in light of ongoing news coverage. The specimen was not enough to convince the USPTO, though, and the mark was refused a month later. (TJL)

Bentz joins DLA Piper – Global law firm DLA Piper has hired Tamany Bentz as a partner in its Intellectual Property and Technology practice in Los Angeles. More specifically, she will work within the firm’s trademark, copyright and media sub-group of the firm’s IPT practice, and will focus on IP litigation including those involving trade secrets and trademarks. She joins from Venable LLP, and commented in the press release that the move “was an opportunity I did not want to pass up”, adding: “The reverberation that the recent expansion of DLA Piper in Los Angeles has caused in the LA legal market presents a unique and timely opportunity to grow my intellectual property practice and share my clients with some of the best IP lawyers in the country and the world.” (TJL)

Franchising focus begins publishing – This week, World Trademark Review is publishing an 8-part series outlining the legislative framework for the enforcement and termination of franchising contracts in nine jurisdictions across Asia and South America. Today we published the first two parts, focused on Chile and Mexico. Tomorrow we will post intelligence related to the framework in Peru and Argentina, before the spotlight is directed towards Thailand, Singapore, Malaysia, the Philippines and Indonesia. (TL)