French company Cousins & Co sold garlands of lights and lights made of luminous balls, available in different colours. The garlands could be hung from the ceiling or on a stand, and could serve as lighting or for mere decorative purposes. Cousins & Co sold the lights through its website, where consumers could choose colours to create a custom-made garland, and in regular shops. It noticed confusing similarities between its website and shop and those of Melan, which sold almost identical luminous garlands. 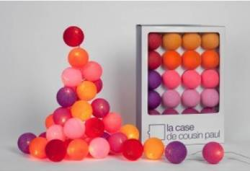 Cousins & Co sought an injunction to stop these practices, but the first instance court decided that the website and shop were not misleading or likely to cause confusion. Cousins & Co appealed this decision before the Mons Court of Appeal (Cousins & Co v Melan, October 29 2012, docket number 2011/RG/313, not yet published).

The appeal court first found that no copyright protected Cousins & Co's global concept. It held that the assortment of products itself was not created by Cousins & Co and that, in the absence of IP rights, this could be copied freely, provided that there was no likelihood of confusion between the companies.

The court then compared the companies' websites and noted that Melan used a similar structure and a substantial part of Cousins & Co's content, including for the garland creator (in relation to its general aspects, colours, text, fonts and the layout and display of sections). The court also found similarity in the websites' source codes, and noted that there was infringement of the database rights protecting the website.

Turning to the shops, the court found that the decoration, furniture and fitting of Melan's shop seemed largely inspired by those chosen by Cousins & Co. In particular, the court observed that Melan also used Plexiglas tubes to display the garland balls, a counter with boxes to display the larger balls and orange and chocolate brown colours for the shop's walls. Finally, the court underlined the identical graphic style used to display the product prices.

The court concluded that the similarities clearly superseded the differences, including the difference between the parties' respective trade names, and that this was likely to create confusion for consumers with an average level of attention. This amounted to an infringement of the Belgian rules transposing the EU Unfair Commercial Practices Directive (2005/29/EC) (transposed into Belgian law by the Market Practices and Consumer Protection Act (April 6 2010)). The court further held that these unfair practices constituted parasitic competition, given their accumulation and persistence.

Accordingly, the court ordered Melan to modify the structure and content of its website, particularly the garland creator, and the trade dress of its shops in order to differentiate itself significantly from Cousins & Co.

This decision confirmed a 2009 Supreme Court judgment (Marquet & Cie v Orac, May 29 2009, docket number C.06.0139.N, available at www.juridat.be) which established that where no IP right protects a product or service, unfair competition law may not be used to fill the gap.

The principle that there is no protection against a copy if no IP rights are attached to the original product has been criticised for potentially contradicting Article 10bis of the Paris Convention for the Protection of Industrial Property, which requires signatory states to ensure that their nationals enjoy effective protection against unfair competition.

Nevertheless, the Mons Court of Appeal applied this principle to an assortment of products by stating that, in principle, such assortment may be freely copied in the absence of IP protection. However, the court also confirmed that the related circumstances of the offer - here, the use of a similar website and shop - can be prohibited if they are likely to create confusion for consumers.