In Comic Enterprises Ltd v Twentieth Century Fox Film Corp ([2014] EWHC 185 (Ch), February 7 2014), in a victory for a true underdog, the High Court has ruled that the claimant’s figurative mark THE GLEE CLUB was infringed by the defendant’s use of 'glee' for a television series and subsequent promotion/merchandising. The defendant’s counterclaim for invalidity failed.

The claimant, Comic Enterprises Limited, is a small to medium-sized company that runs a number of live entertainment venues throughout the United Kingdom (the first club opening in Birmingham in 1994), primarily for stand up comedy, but also other forms of entertainment, including live music. The defendant is the well-known media company Twentieth Century Fox Film Corporation, responsible for the television series Glee, produced in America and broadcast on British television from 2009. The songs from Glee were performed on tour and album compilations were sold in the United Kingdom, as well as merchandise bearing the word 'Glee'.

The registered trademark in question was a series of two marks, both device marks which include the words ‘The Glee Club’. The words are presented in a cone of light from a spotlight. The two marks are identical save that the first in the series is stated to be claimed in the colours red, black and white, whereas the second is represented in black and white with no claim to colour. The trademark was filed in 1999 for goods in Class 25 and services in Class 41 of the Nice Classification, including entertainment services, comedy services, and night-club and cabaret entertainment. 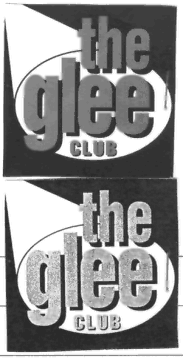 Comic claimed trademark infringement, as well as passing off. Fox counterclaimed for partial invalidity and partial revocation of Comic's mark.

Roger Wyand QC, sitting as a deputy judge, dealt first with the scope of protection of Comic's mark and the claim to colours in the first of the series mark. Fox argued that, as the mark was a series mark, in order to assess infringement the court had to identify a single mark which represented both of the series. The deputy judge did not agree and considered that:

The deputy judge did, however, partially revoke the mark for non-use in respect of Class 25 goods, and narrowed the specification of Class 41 to what he considered was a "fair" specification in light of the use, and that "entertainment services" was too broad.

In respect of validity, Fox argued that the mark was descriptive and put forward much evidence and many witnesses to attest to this fact. The deputy judge was persuaded by Comic’s arguments, however, finding that the Trademarks Act 1994 did not set out a minimum level for distinctiveness, and that the device component of the mark was not devoid of any distinctive character.

With regard to infringement, following an assessment of the similarity between Comic’s mark and the sign as used by Fox, the deputy judge found that there was a similarity between the two marks (although it was not "of the highest order").

The deputy judge held that Comic’s mark had a reputation as it had acquired distinctiveness, and that it had been established in evidence that the similarities between Comic’s mark and Fox's sign were such that one would necessarily call to mind the other. Comic argued that Fox’s use of the sign was detrimental to the distinctive character or repute of its mark, and the deputy judge found that the evidence established that it was in fact the case, and that Fox’s use caused dilution and tarnishing of the mark.

The deputy judge therefore concluded that Fox had infringed the trademark under Section 10(2)(b) and 10(3).  However, he did not find in Comic’s favour with respect of the claim in passing off, as he found that the damage suffered by Comic was caused by its venues being confused with Fox’s television show, and its potential customers being put off. As there as no misrepresentation by Fox, there could be no successful claim in passing off.