The UKIPO has rejected a revocation action against a figurative gin bottle trademark, finding sufficient (though minimal) genuine use of various acceptable variants of the mark (UKIPO Decision No O/109/22 re UK Trademark Registration No 811128694 “MASTER’S LONDON DRY GIN” (link here). 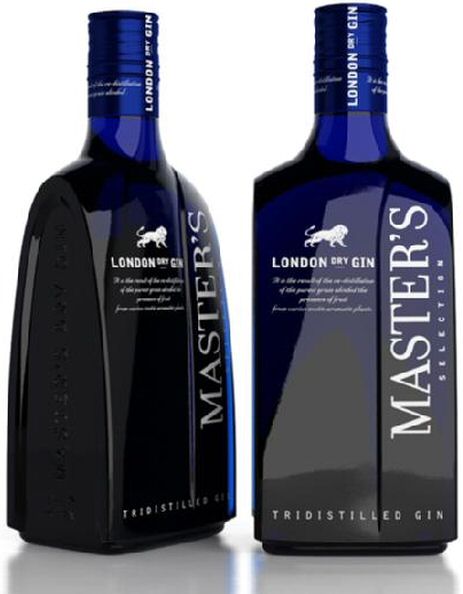 A UK clone registration of the MASTER’S BOTTLE TRADEMARK was automatically created from this EU registration following Brexit. In March 2021, one of Destileras’ competitors, Inver House Distillers Limited, filed a revocation action against the mark under the following grounds:

Destileras filed a counterstatement, evidence (in the form of a single witness statement by its trademark attorney and six accompanying exhibits) and submissions defending the action and claiming the mark had been used for the registered goods in the relevant periods.

Should the master’s bottle trademark be treated as figurative mark rather than a shape mark?

The UKIPO upheld Inver’s argument that the mark should be treated as a figurative 2D mark depicting 3D bottles, rather than as a shape mark. It was originally filed and registered at WIPO as a figurative mark and to treat it otherwise would have the effect of widening its scope further than originally intended.

Was the evidence filed sufficient?

Inver raised concerns regarding the sufficiency of the evidence filed as the witness statement and exhibits were executed by Destileras’ attorney rather than a director or employee and essentially amounted to hearsay evidence. The UKIPO was satisfied that Destileras’ attorney had the authorisation and knowledge to provide the evidence and that its decision would be made on the balance of all relevant factors (including the weight of the evidence provided).

Were the differing forms of use genuine use of the master’s bottle trademark?

Destileras provided evidence of use in a number of forms 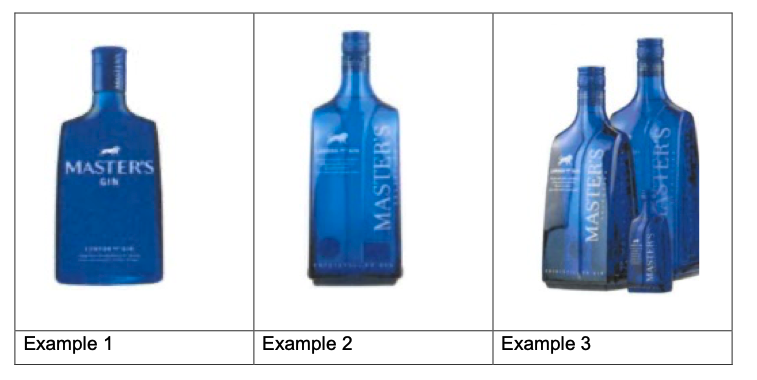 The applicant argued that these did not constitute genuine use of the mark as registered. As set out in Section 46(2) of the Trademarks Act: “use of a trademark includes use in a form differing in elements which do not alter the distinctive character of the mark in the form in which it was registered”. The UKIPO followed the approach to distinctiveness laid out in Nirvana Trademark (BL O/262/06), noting that two questions should be asked in relation to the application of that section:

The UKIPO held that the mark’s distinctiveness lay “in the word ‘MASTER’S’, the lion device and the bottles” and “the sharply cut-off sides of the bottles, the raised ‘fold’ running vertically down the bottles, and the indented side”. The words ‘London dry gin’, ‘tridistilled gin’ and ‘selection’ were considered negligible as compared to these features. As the distinctive elements of the mark were all present in all three examples of use, these constituted acceptable variants and thus genuine use of the figurative mark.

Was there genuine use on the evidence?

In relation to genuine use, the UKIPO conceded that:

However, in line with previous case law, the UKIPO held that genuine use does not need to be quantitatively significant in order to be genuine and “even minimal use may qualify as genuine use if it is deemed to be justified in the economic sector concerned for the purpose of creating or preserving market share for the relevant goods or services” (Case C-40/01 Ansul BV v Ajax Brandbeveiliging BV [2003] ECR I-2439 applied).

What was needed was a global assessment of genuine use, taking into account multiple factors and reviewing the evidence as a whole. As Destileras could point to a “consistent and repeated” pattern of sales (even though many of them were to one exclusive retailer) and had attempted to create and maintain a market for their goods under the master’s bottle trademark, it had ultimately demonstrated sufficient genuine use. Consequently the revocation action failed.

The UKIPO’s decision provides useful guidance on the application of the genuine use principle for figurative marks used in a differing form to that registered. It also confirms that, when it comes to evidencing genuine use, it is quality rather than the quantity that will ultimately dictate whether the threshold has been met.

However, the decision also demonstrates the inherent difficulty in attempting to predict the outcome of non-use actions at the UKIPO. Non-use actions are usually evidence heavy, and will, to a certain extent, depend on the UKIPO’s multi-factorial assessment of all circumstances it deems relevant to that particular case. Given the differences in forms of use and registration of the mark, the minimal sales figures and invoices provided in an extremely large market, and the evidence deficiencies raised by the UKIPO, this case could perhaps have easily gone the other way.

While the outcome of this case was positive for the rights owner, it is also nonetheless an important reminder that owners of registered rights that are more than five years old, whether UK national registrations or cloned registrations, should think carefully about the potential vulnerability of their rights before taking action against third parties and the risk of losing them altogether if use cannot be proven in the proceedings or in a later retaliatory non-use cancellation action.