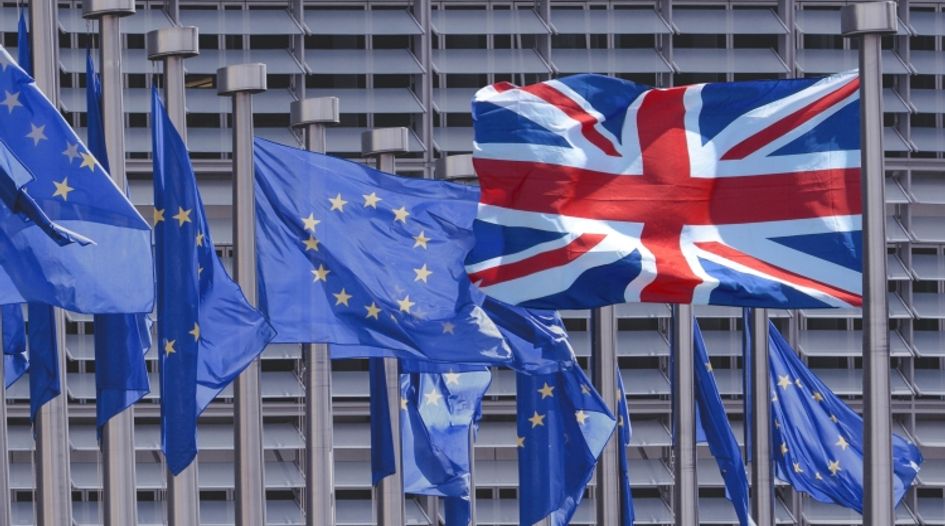 The UK government has released a swathe of technical notices setting out likely scenarios for businesses and citizens in the event of a ‘no-deal Brexit’. Positively, some of the papers lay out the intended treatment of trademarks and designs if a deal is not struck. However, on the issue of cost and the exhaustion of intellectual property rights, significant questions remain.

The work of the Brexit negotiations and preparation is intensifying as the 29 March 2019 deadline approaches. Meanwhile, the UK government continues to prepare for a 'no-deal' scenario in which the UK crashes out of the EU having failed to negotiate terms. The latest development in these efforts was the release of technical notices providing businesses guidance on what to expect should a 'hard Brexit' occur. One of these focuses specifically on the treatment of EU trademarks (EUTMs) and registered Community designs (RCDs).

Firstly, the UK government reiterated its intention that existing registered EUTMs and RCDs will continue to be protected and enforceable in the UK through the provision of an equivalent trademark or design registered in the UK. Those with applications pending at EUIPO on 29 March 2019 will have nine months to apply in the UK for the same protections, retaining the date of the EU application for priority purposes (these rights will then be subject to later renewal in the UK). However, while existing rights holders will be notified of the transfer (and be given an opt-out), during the nine-month period after exit those with pending applications will not be specifically notified that they have to refile in order to secure UK coverage.

In previous communications, the government has stated that the transfer of EUTMs and RCDs would be automatic and free-of-charge. The language in the current missive, however, merely commits to the new UK right being "provided with minimal administrative burden" – it does not state that this transfer will be “free-of-charge”.

Reflecting on the documents, Lee Curtis, partner and chartered trademark attorney at HGF, told WTR: “It is pleasing to note that the UK government has announced even in the event of a no-deal Brexit that both EU trademark applications and registrations can be ‘cloned’ into corresponding UK applications and registrations with no loss of rights. However, on the issue of costs the ‘no-deal’ paper is not completely clear in my opinion. I have presumed the conversion of registered EU trademarks with a ‘minimal administrative burden’ suggests conversion will be free and this to a degree tallies with recent comments. I have also presumed that with regard to pending EUTM applications, and their conversion within nine-months of Brexit ‘under the same terms for a UK equivalent right, using the normal application process for registered trade marks and registered designs in the UK’, suggests that that the official fee for filing these converted applications will the same as a ‘normal’ UK trademark application. However, these comments are not exactly unambiguous.”

Those seeking further clues as to the approach to professional representations will be disappointed as the latest guidance notes do not cover likely arrangements for representation at the EUIPO (that would require a negotiated agreement rather than a unilateral one). However, the UK has addressed another keenly debated topic: the exhaustion of intellectual property rights if there’s no-deal Brexit.

On this, the UK government has signaled its intention to continue to recognise the European Economic Area (EEA) regional exhaustion regime from exit day, meaning that there would be no immediate change to the rules affecting imports of goods into the UK. However, longer term uncertainty remains as this period will be temporary. Additionally, we do not know whether the EU will place restrictions on the parallel import of goods from the UK to the EEA. The UK government adds that goods placed on the UK market by or with the consent of the right holder after the UK has exited the EU will not be considered exhausted in the EEA – meaning that businesses exporting these goods from the UK to the EEA might need the right holder’s consent. In short, the status quo is partially confirmed – for now.

Curtis reflects: "The paper makes interesting reading. Although the government makes it clear the status quo will for be maintained of effectively a combination of UK/EEA exhaustion in a no-deal scenario, the paper emphasised this could be temporary and indicated a consultation would be put in place on the question of exhaustion. Could this herald UK-specific, or in my opinion the more likely outcome in a free market post-Brexit political landscape, international exhaustion?"

That answer is still to come. Overall, though, if negotiations look likely to result in a hard Brexit, brand owners could be left with a conundrum – to file duplicate rights or not. On this, Curtis concludes: “In the event of a deal on Brexit, given the provisions outlined in the draft agreement on exiting the European Union it seems there is no need to file duplicate UK and EUTM Applications at present, unless dealing with particular brand specific issues.... Although I am of the view that many of duplicate UK trademark registrations filed over the past eighteen months were simply unnecessary, as the year and Brexit negotiations wear on there may be more logic in filing duplicate applications. By November, we should know whether a no-deal Brexit is a probable or certain outcome, rather than merely a rising possibility as at present. Given the Government has indicated there will be a cost associated with converting pending EUTM Applications into UK Applications in the event of a no-deal Brexit and given by then we will be less than five months away from Brexit the argument for filing duplicate UK Applications will make increasing sense.”